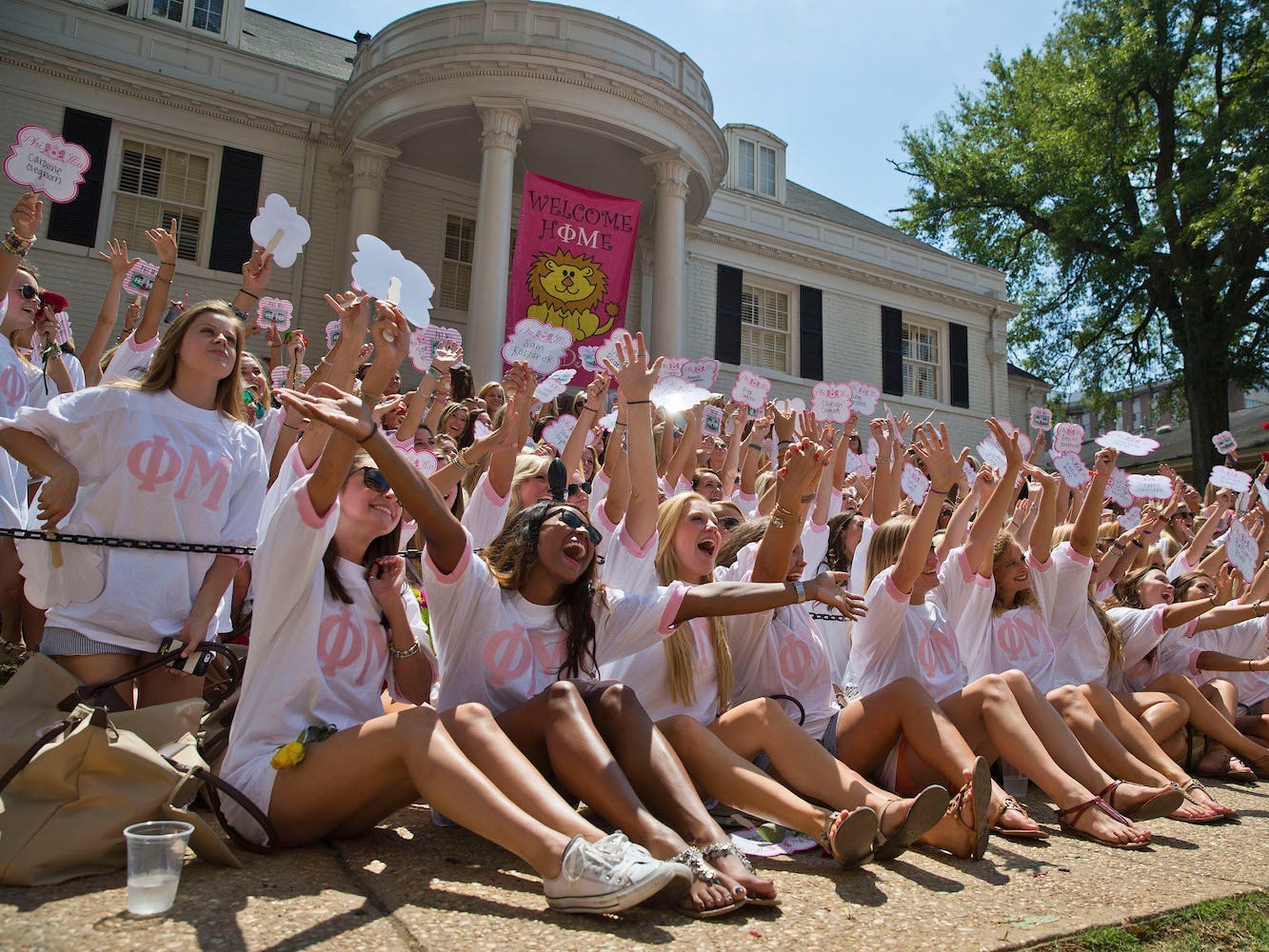 Sorority recruitment at the University of Alabama.

TikToks of students participating in sorority recruitment at the University of Alabama are going viral.
Outfit of the day, or OOTD, videos from the young women are gaining millions of views.
Jewelry retailer Kendra Scott is taking advantage of the latest TikTok trend.
See more stories on Insider's business page.

With summer winding down, colleges and universities are preparing for the fall semester. Students are dorm shopping, buying school supplies, and new clothes. At the University of Alabama in Tuscaloosa, Alabama, students are also participating in sorority recruitment.

For one week every year, more than 2,200 women participate in recruitment (also known as "rush") at the school, according to AL.com. During the week, current sisters from the sororities on campus are meet potential new members to learn more about them and determine who is the best fit for their sorority. This year, they're also going viral on TikTok.

The popular video social media app has been flooded with videos of women rushing at the University of Alabama. They're gaining millions of views every day by sharing their experiences, their new friends, and their outfits.

Every day of recruitment before heading out to the day's activities, many of the young women are posting videos showcasing their outfits, also know as outfits of the day or OOTDs, and gaining millions of views on TikTok.

Videos showcasing new products, new trends, and new clothes can gain millions, sometimes billions of views on TikTok and is often utilized as a marketing tool for retail companies. Many popular brands highlighted in the videos include Target, Shein, Franchesca's, and Amazon. But several southern-based stores like Kendra Scott are gaining popularity after being featured in the videos.

Kendra Scott, a jewelry company based in Austin, Texas, quickly jumped on the TikTok trend when its accessories were featured by women rushing at Alabama.

Since participating in what people are now calling "#bamarush" and "#rushtok," Kendra Scott has seen an increase in its website traffic from new users by 11%, Mindy Perry, chief marketing officer at Kendra Scott told Insider over email. The website also saw an increase of 12% of new users in Alabama and over a 12% increase of new users who are between the ages of 18 to 24 years old.

"The coolest part of this viral trend is that it all started organically- we weren't even tagged in the students' #OOTDs at the beginning," Perry said. "Our phenomenal social team jumped into the conversation right away to begin commenting and engaging, which started to take on a life of its own."

Kendra Scott has since made two viral videos on TikTok about rush which have almost reached a million views combined. The marketing team at the jewelry company, which says their strategy on TikTok is "social listening," watching and listening to consumers in their everyday lives.

Perry believes that TikTok can be a powerful app because the algorithm allows users to control what they want to see.

"While the concept of Rush Week is certainly not 'new,' it has been fun to see how the entire nation is watching these young women and learn about a tradition important to many colleges and universities," Perry said.