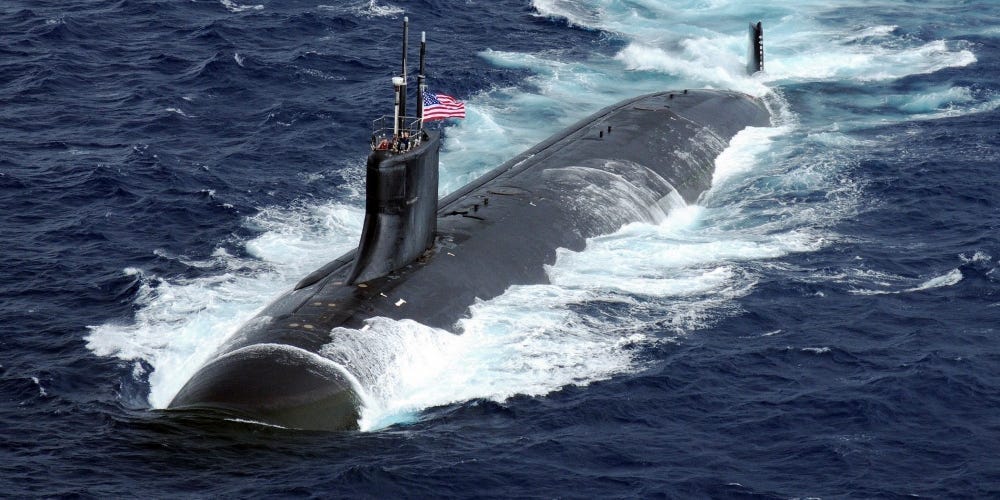 A US submarine hit an underwater object in October, for reasons that were initially a mystery.
The Navy concluded Monday the USS Connecticut hit an uncharted hill beneath the surface.
Chinese state media are not satisfied, and without evidence floated the idea of a nuclear spillage.

Chinese state media are casting doubt on the US account of what happened to a nuclear submarine that collided with an object last month.

US Navy investigators concluded Monday that the nuclear-powered attack submarine USS Connecticut hit an uncharted underwater hill while patrolling in international waters in the South China Sea on October 2.

"The investigation determined USS Connecticut grounded on an uncharted seamount while operating in international waters in the Indo-Pacific region," Cdr. Haley Sims, a 7th Fleet spokesperson, told Insider on Monday.

China claims the South China Sea as its own, and objects to other nations sailing military craft there.

The US rejects Chinese claims to the waters, and makes a point of sailing there in so-called freedom of navigation missions, as do other Western nations, often angering Beijing.

The presence of a US Navy submarine in the South China Sea represents an aggression to Beijing, and Chinese state media were quick to seize on the collision and attack the official US narrative.

On Tuesday, the state-run Global Times newspaper published claims from Chinese military experts who said the collision may have resulted in nuclear leakage that the US is trying to conceal.

"A nuclear leakage could have taken place, and a recent flight of a US nuclear material detection aircraft to the South China Sea shows the US understands the possibility," the Global Times wrote.

A Beijing-based think tank said last week it had satellite evidence showing that US spy planes, including a "nuke sniffer," recently flew over the South China Sea, according to the South China Morning Post.

Experts told the SCMP that the aircraft were likely establishing whether there was any nuclear fallout from the collision.

Zhang Junshe, a senior research fellow at the Naval Research Academy of China's People's Liberation Army, told the Global Times the US justification for the collision "lack sincerity, transparency and professionalism."

Last week the Global Times launched an online petition calling on the US to disclose information about the collision.

Even though the US did then release some information, it appears not to have satisfied the outlet, which often gives voice to aggressively pro-Beijing points of view.

Other outlets also cast doubt on the US version of events.

"Covering up the truth is a tradition of the US military," the People's Daily newspaper wrote Monday, referring to the collision as an "accident" in inverted commas.

The newspaper previously referred to the crash as an "example of the superpower's reckless military presence."

After the Navy first reported the collision on October 7, five days after it happened, Chinese officials accused the US of a cover-up.

Zhao Lijian, the Chinese Ministry of Foreign Affairs spokesman, said on on October 26 that the US was "irresponsible" and "cagey." Zhao added that China had "every reason to question the truth and the intention of the US."

"What was USS Connecticut up to do secretively in the South China Sea this time? What did it collide with? Why did that collision happen?" he said.

"Was there a nuclear leak that creates nuclear contamination in the marine environment?"