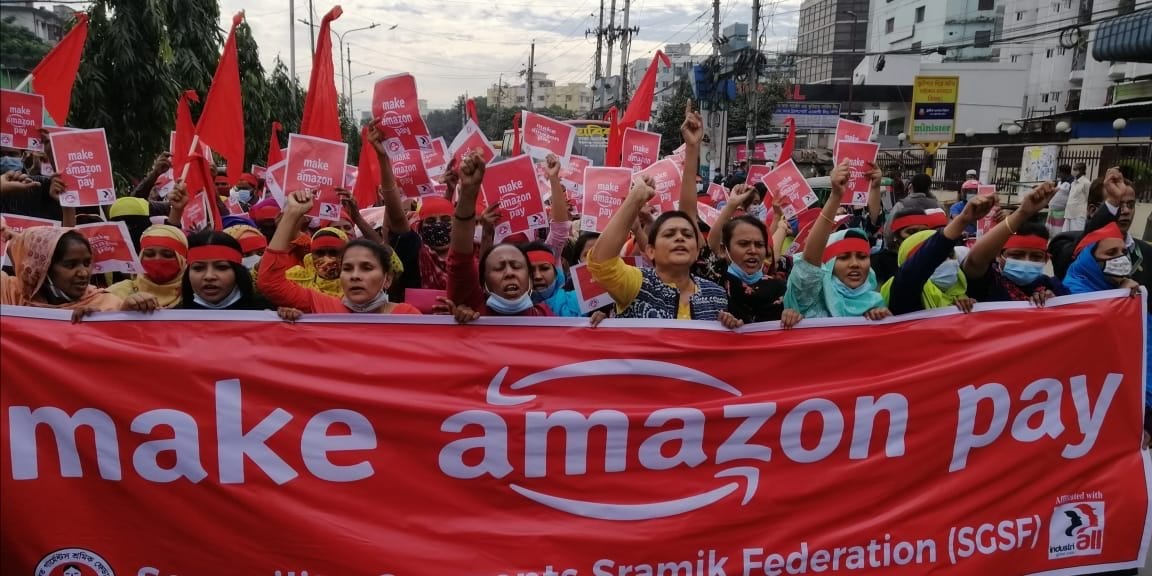 A coalition of Amazon workers, unions, and activism groups began protesting against Amazon on Black Friday.
The “Make Amazon Pay group” gave the company a list of demands that included raising workers’ pay, putting an end to union-busting, and taking climate action.
Amazon workers in Germany have downed tools and garment workers in Bangladesh are protesting outside a supplier. In the UK, a trade union called for a parliamentary inquiry into “dehumanizing” working conditions.
Amazon on Thursday said it would offer workers $150 to $300 holiday bonuses this year, but UNI Global Union chief, Christy Hoffman, told Business Insider this doesn’t go far enough.
Visit Business Insider’s homepage for more stories.

As Amazon gears up for one of its biggest shopping days of the year, thousands of people around the world are protesting its facilities.

A coalition of unions, human rights, and environmentalist groups on Friday launched a global protest of the e-commerce giant called “Make Amazon Pay.”

The organizations behind the coalition, which include the international UNI Global worker’s union, Oxfam, and Greenpeace, gave a list of common demands.

Among the wide-ranging demands were: raising warehouse workers’ pay and benefits, ending union busting tactics, and committing to ending Amazon’s contracts with the fossil fuels industry.

The common demands statement reads: “During the COVID-19 pandemic, Amazon became a trillion dollar corporation, with Bezos becoming the first person in history to amass $200 billion in personal wealth. Meanwhile, Amazon warehouse workers risked their lives as essential workers, and only briefly received an increase in pay.” Amazon workers received a $2 per hour wage increase in March, which was then cut in May.

Amazon’s online sales have skyrocketed during the coronavirus pandemic, and its revenues are projected to soar even higher with the holiday season.

In a statement sent to Business Insider, Make Amazon Pay said there were actions planned for 15 countries including: Brazil, Mexico, the US, the UK, Spain, France, Belgium, Germany, Luxembourg, Italy, Poland, India, Bangladesh, the Philippines and Australia.

In Germany, Amazon workers in seven warehouses have gone on strike, while in Bangladesh garment workers protested outside an Amazon supplier facility in Dhaka.

In the UK, the GMB worker’s union projected the words “Make Amazon Pay” on to the side of the company’s London headquarters. It also officially called for a parliamentary investigation into “dehumanising” working conditions inside the company’s warehouses. 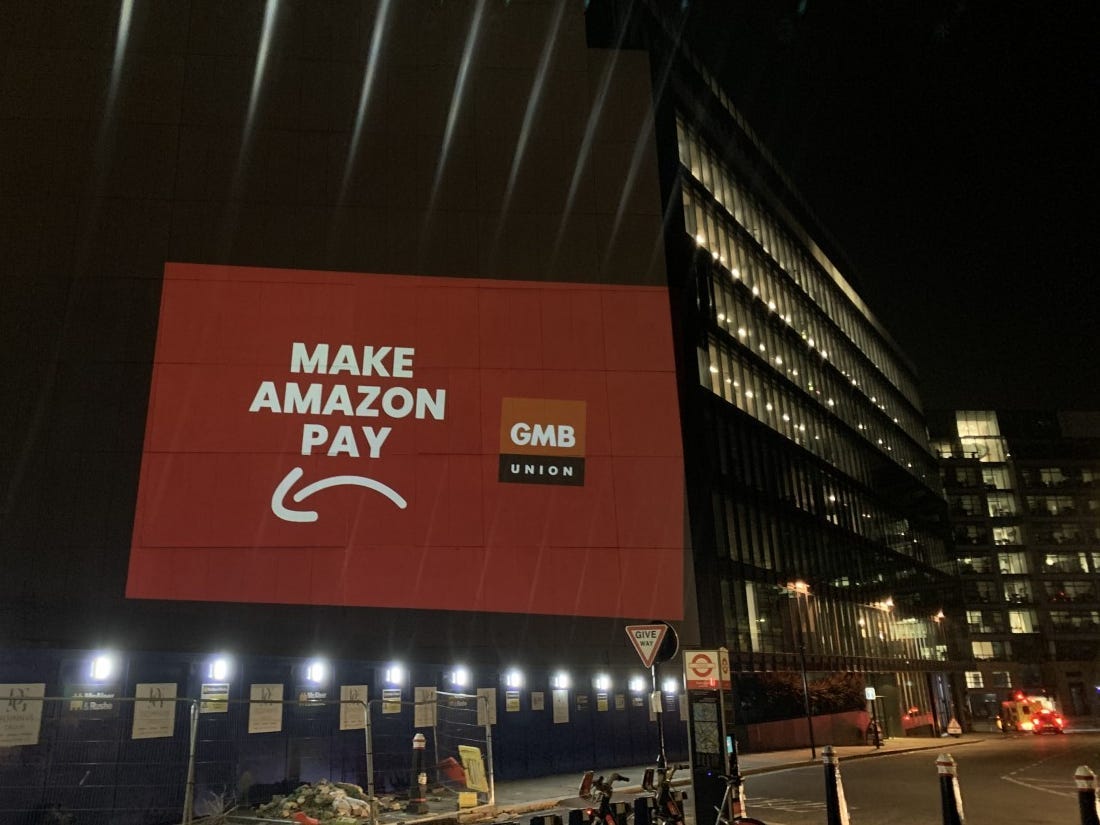 The GMB Union projected this onto the side of Amazon's London HQ early on Friday.

The protests come a day after Amazon announced it was granting a total of $500 million in holiday bonuses to its front line workers, translating to $300 for full-time employees, and $150 for part-time employees.

“It is great that workers are getting more this holiday season, it is not enough. To show it values its workforce, Amazon should collectively bargain wages and conditions with workers throughout its operations, rather than make one time unilateral gestures of appreciation,” said Hoffman.

“Since the unfortunate closure of many high street stores Amazon has profited greatly. That and the fact all their staff are working extra hard during this pandemic, putting themselves at risk. Surely Amazon can do way better than this,” the worker said.

In response to the protests, an Amazon spokesperson told Business Insider: “This is a series of misleading assertions by misinformed or self-interested groups who are using Amazon’s profile to further their individual causes.”

It added: “Amazon has a strong track record of supporting our employees, our customers, and our communities, including providing safe working conditions, competitive wages and great benefits, leading on climate change with the Climate Pledge commitment to be net zero carbon by 2040, and paying billions pounds in taxes globally.”