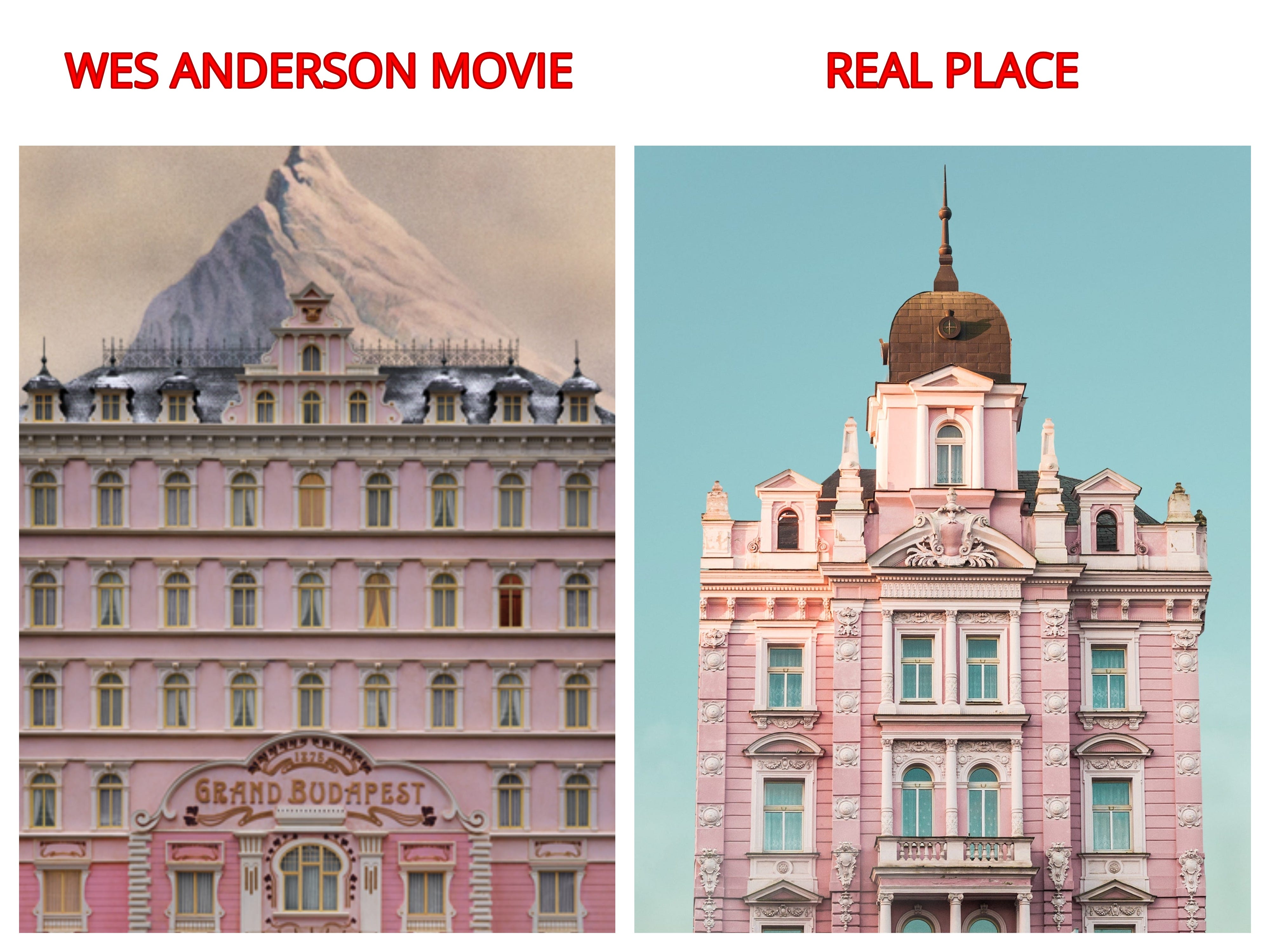 The founder of the popular Instagram account Accidentally Wes Anderson is releasing his first-ever book highlighting 200 of the “most idiosyncratic and interesting locations on Earth.”Images in the book span every continent except Antarctica and echo filmmaker Wes Anderson’s distinctive and whimsical visual style.Titled “Accidentally Wes Anderson,” the book is available now for preorder and will be released on October 20.Founder Wally Koval and his wife, Amanda, also plan to launch a searchable database of Wes Anderson-inspired images close to the book’s release date.Visit Business Insider’s homepage for more stories.

The places in Wes Anderson films are the stuff of travelers’ dreams.

Take The Grand Budapest Hotel, a perfectly symmetrical, pastel pink structure perched on mountains in the Republic of Zubrowka that looks like its windows are frosted in icing. It has 370 reviews and a close-to-five-star rating on TripAdvisor.

The only problem? It doesn’t actually exist. “This is a fictional place … Please do not try to book a visit here,” TripAdvisor writes at the top of The Grand Budapest Hotel’s listing.

Since 2017, Koval and his wife, Amanda, have spent countless hours combing Instagram for images of real places around the world that emulate Anderson’s distinct visual style and posting them to their Instagram account “Accidentally Wes Anderson.” In each caption, they include background about where each place is and how to visit.

What started out as an account with 15 followers has transformed into a community of 1.1 million followers. Now they’re releasing their first book, “Accidentally Wes Anderson.”

Currently available for preorder and releasing October 20, the book features 200 of the “most interesting and idiosyncratic places on Earth,” whittled down from 15,000 submissions. The images, submitted by photographers hailing from over 50 countries, span every continent except Antarctica, Koval told Business Insider. They range from grand palaces to grandstands in the middle of nowhere and are accompanied by in-depth stories about how each place came to be.

More than half of the images in the book have never been featured on the Instagram feed before, and those that have date back to the account’s early years, Koval said.

While the Accidentally Wes Anderson aesthetic has certain bread-and-butter qualities — symmetry, pastel colors, and a straight-on perspective — there is a certain je ne sais quois that Koval hasn’t quite put his finger on

Whatever that je ne sais quois is, it has the real Wes Anderson’s stamp of approval: “The photographs in this book were taken by people I have never met, of places and things I have, almost without exception, never seen — but I must say: I intend to,” the filmmaker writes in the forward.

As for the 14,000-plus images that didn’t make it into the book, they won’t go unseen. Around the book’s release date, Wally and Amanda plan to launch an online database, where visitors can look up Accidentally Wes Anderson images by location, color, and photographer.

The website will cater to the evolving Accidentally Wes Anderson community. “People aren’t just exchanging information about their travels,” Koval said. “People are also utilizing what we’ve created for their design — interior design and mood boards and things — which I never expected.”

Ahead of the book’s release date and the database launch, Koval shared a selection of images and snippets of stories behind the images with Business Insider.

From a bright yellow funicular car in Lisbon to bright pink cabins in California, here’s an early look at some of the destinations featured in “Accidentally Wes Anderson”: 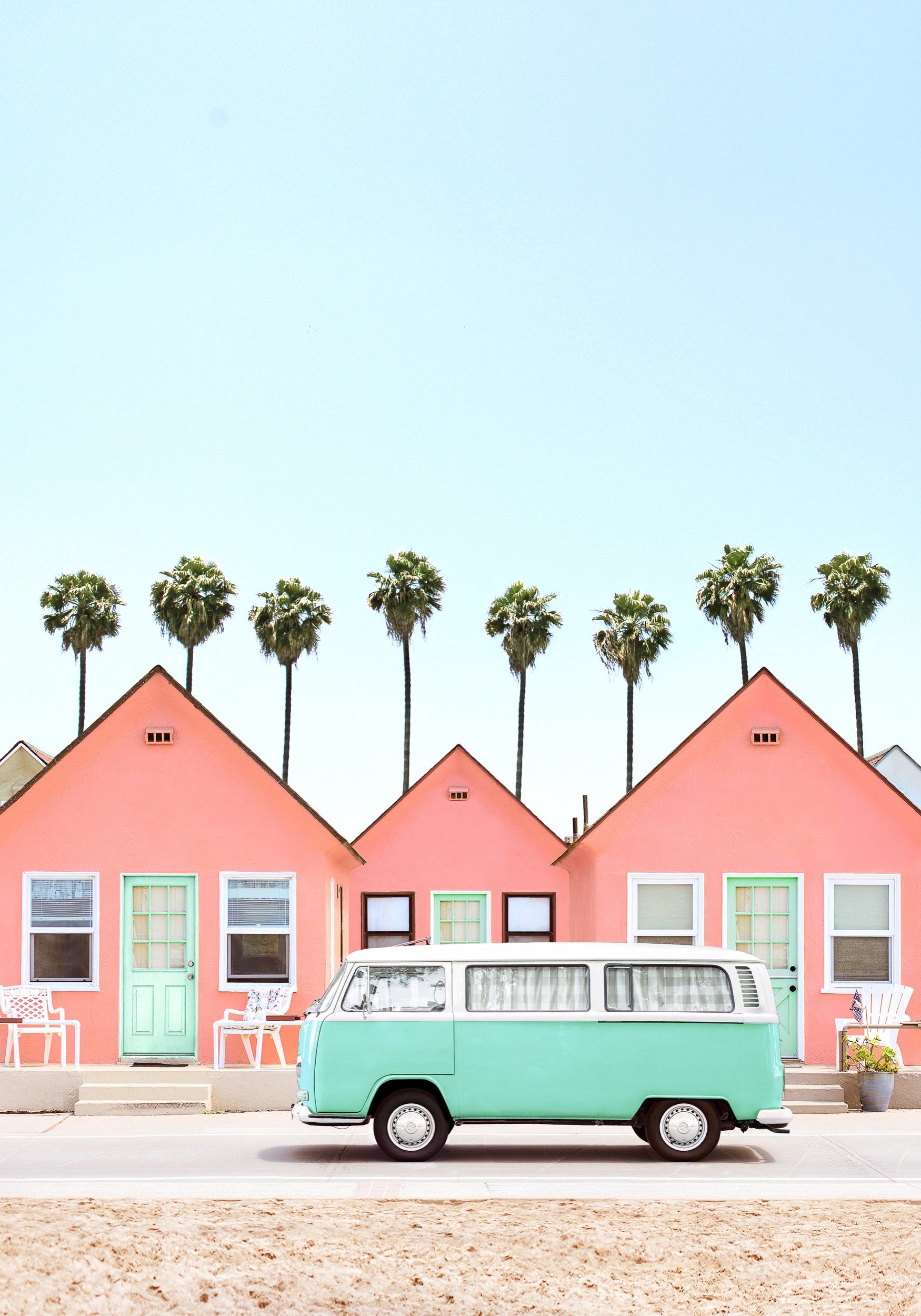 From the book: “Today, these rental bungalows still stand, representing an important moment in Oceanside’s nascent days, a time when the town enticed visitors with the tremendous promise that ‘If you long for a beautiful country, with a matchless climate, come to Oceanside, where life is worth living.'” 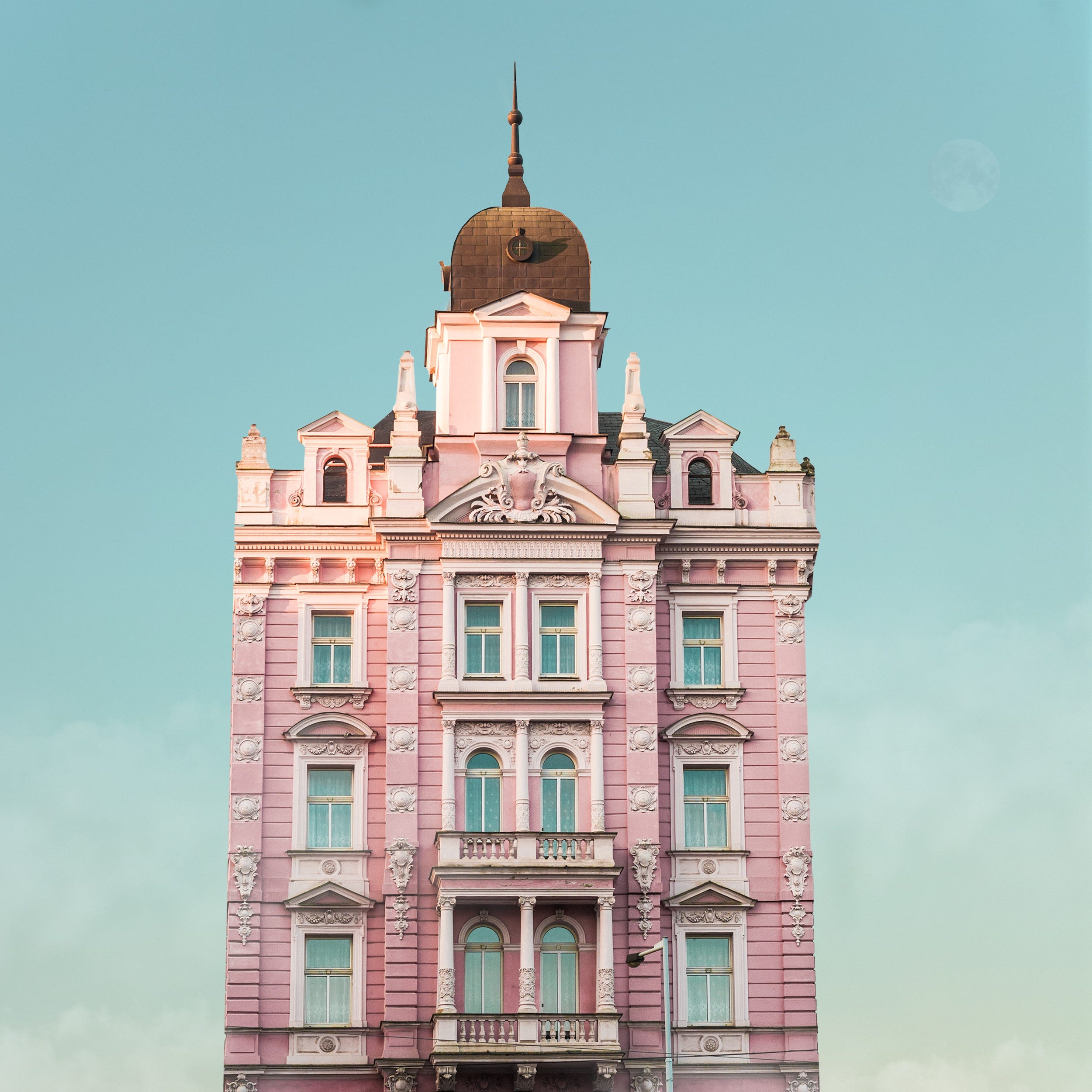 From the book: “A hot-pink confection of Bohemian Neo-Renaissance style, the Hotel Opera stands in the less touristy Nové Město, or ‘New Town,’ quarter of storied Prague. It is a five-minute walk from historic Old Town — an apt reflection of Prague’s nonlinear relationship to time. This romantic city is a unique meeting ground for old and new, historic and modern. Miraculously preserved buildings established in the fourteenth century are squeezed beside ultramodern constructions, like a Frank Gehry–designed glass building that resembles a dancing couple. And yet nothing feels out of place in this enchanted, haunted city — including the bright pink Hotel Opera … which is not particularly near the Opera.” 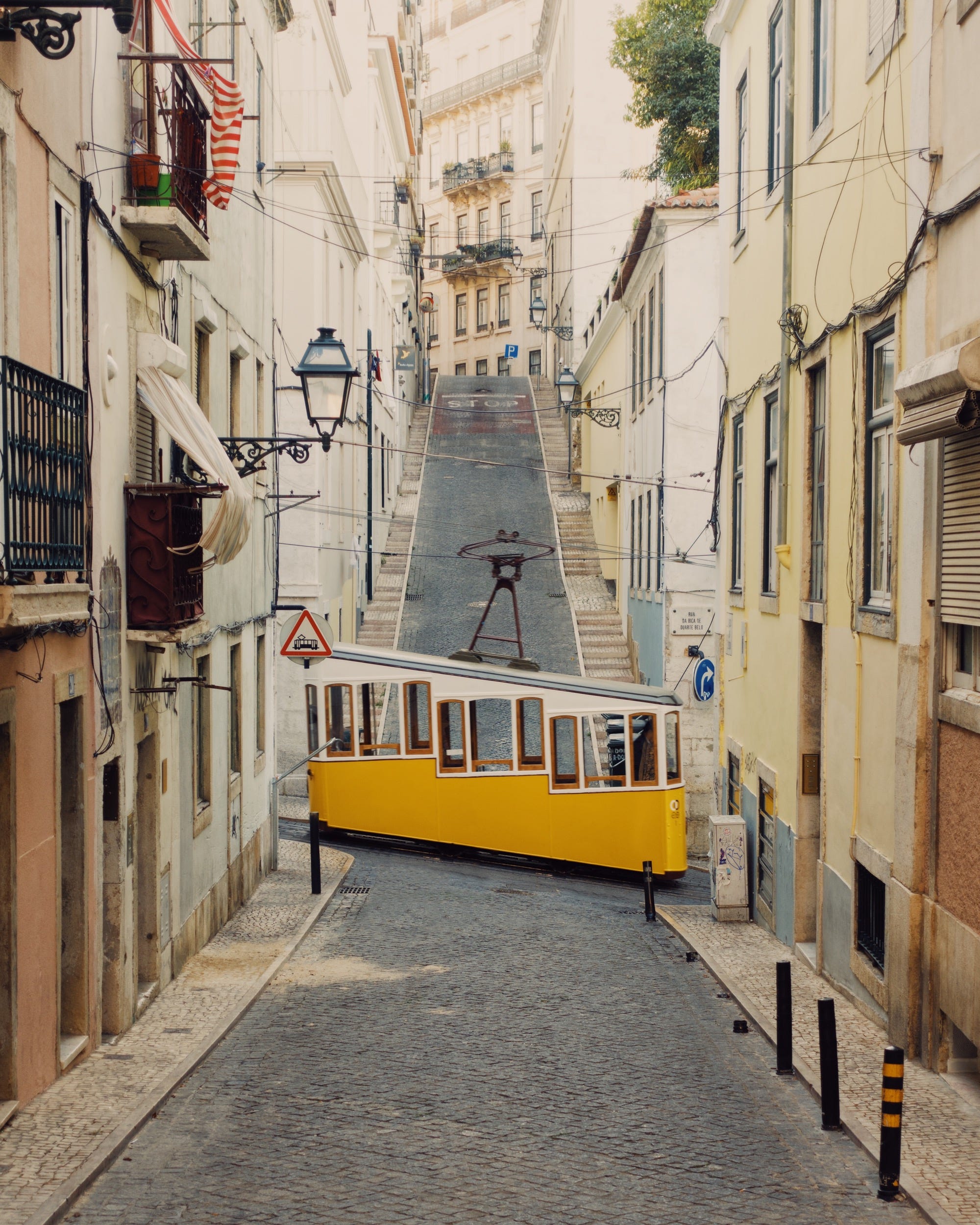 From the book: “One of three funicular railway cars in Lisbon, Ascensor (or Elevador) da Bica climbs 800 feet up one of the city’s steepest hills.” 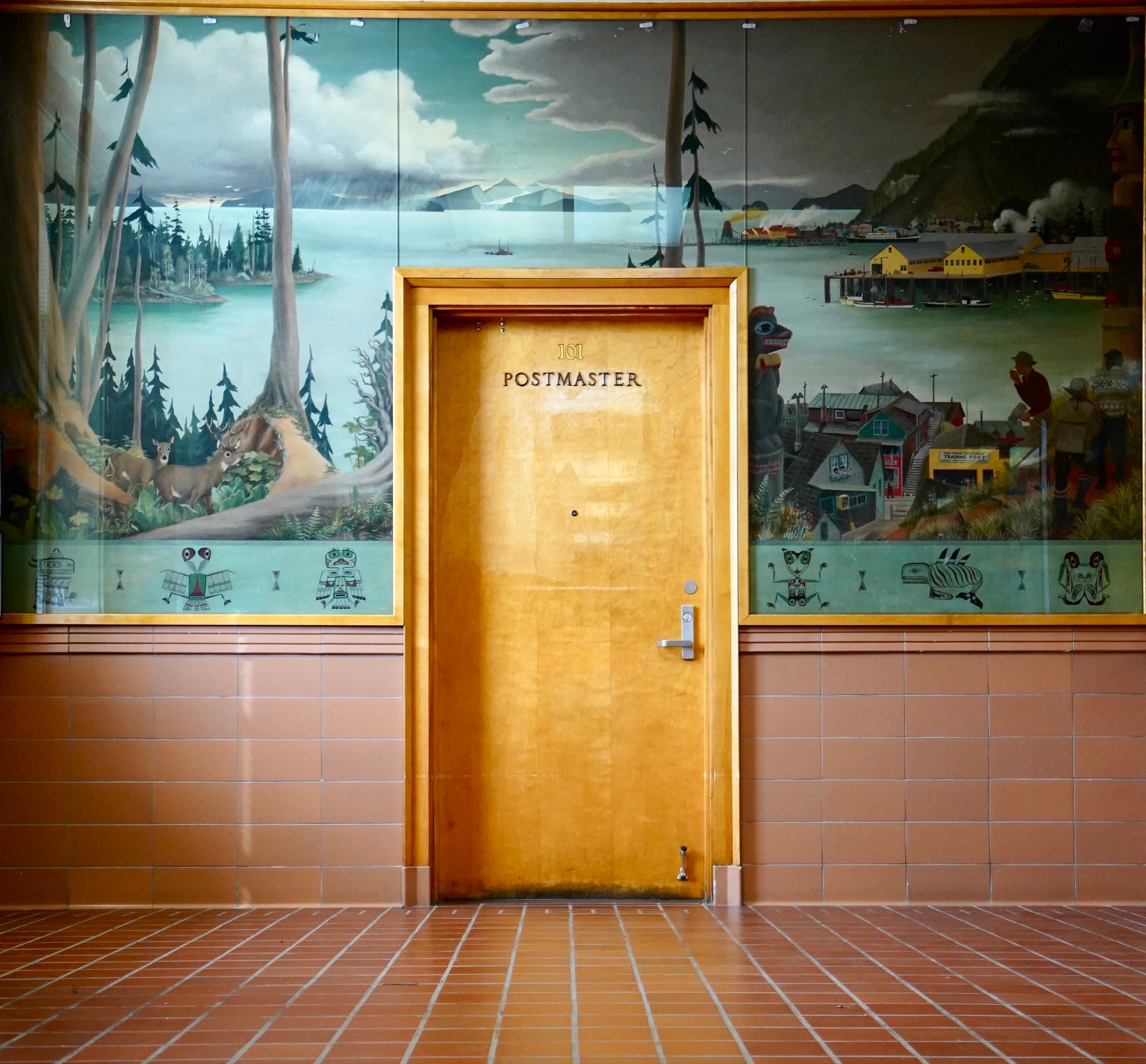 From the book: “In this community of 3,000, there is a Post office, and a Postmaster (per the sign on the door), but no one delivers the mail.” 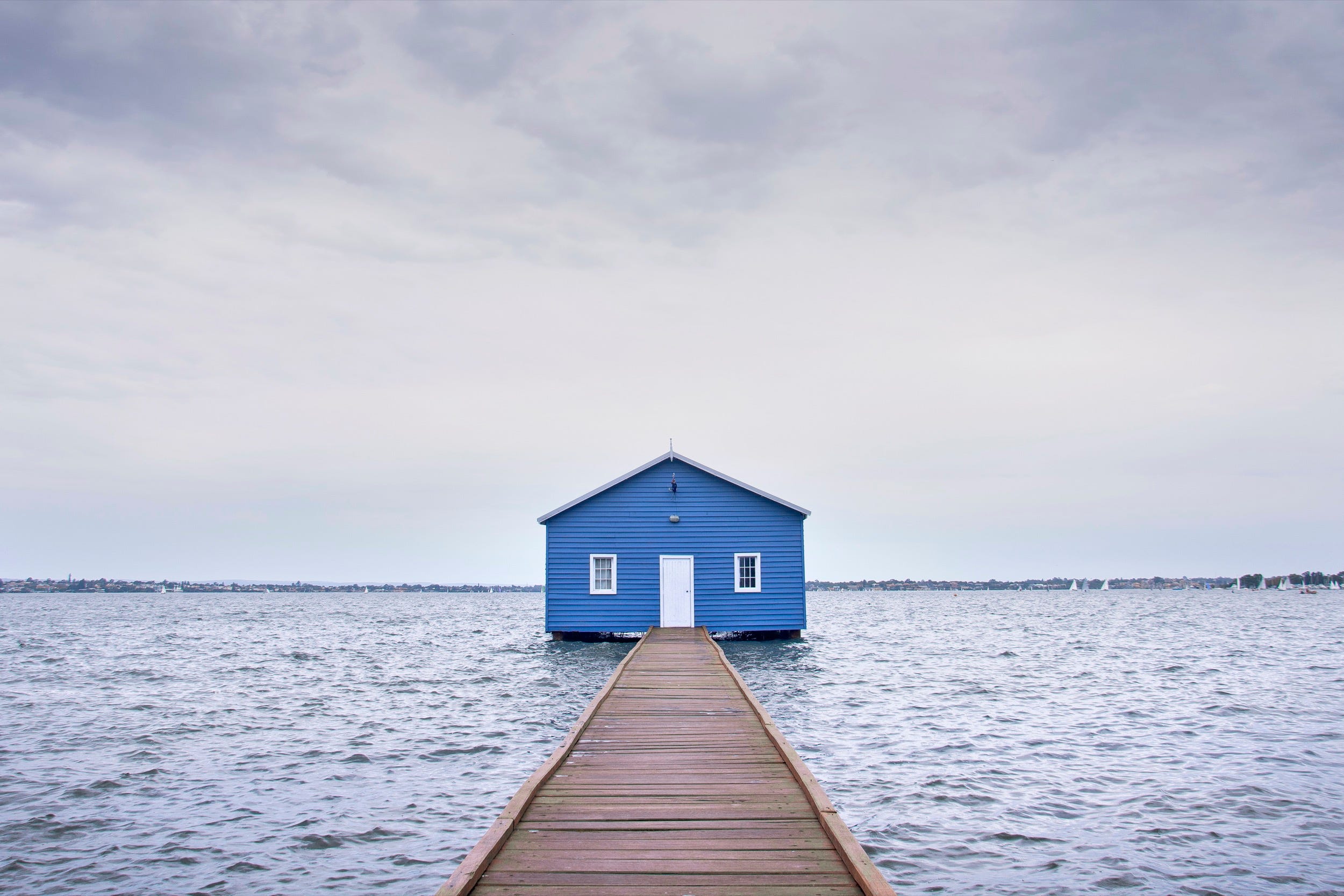 From the book: “The numbers of tourists have grown so overwhelming that in 2019 the city of Perth decided to spend $400,000 on a solar-powered toilet facility to serve them.” 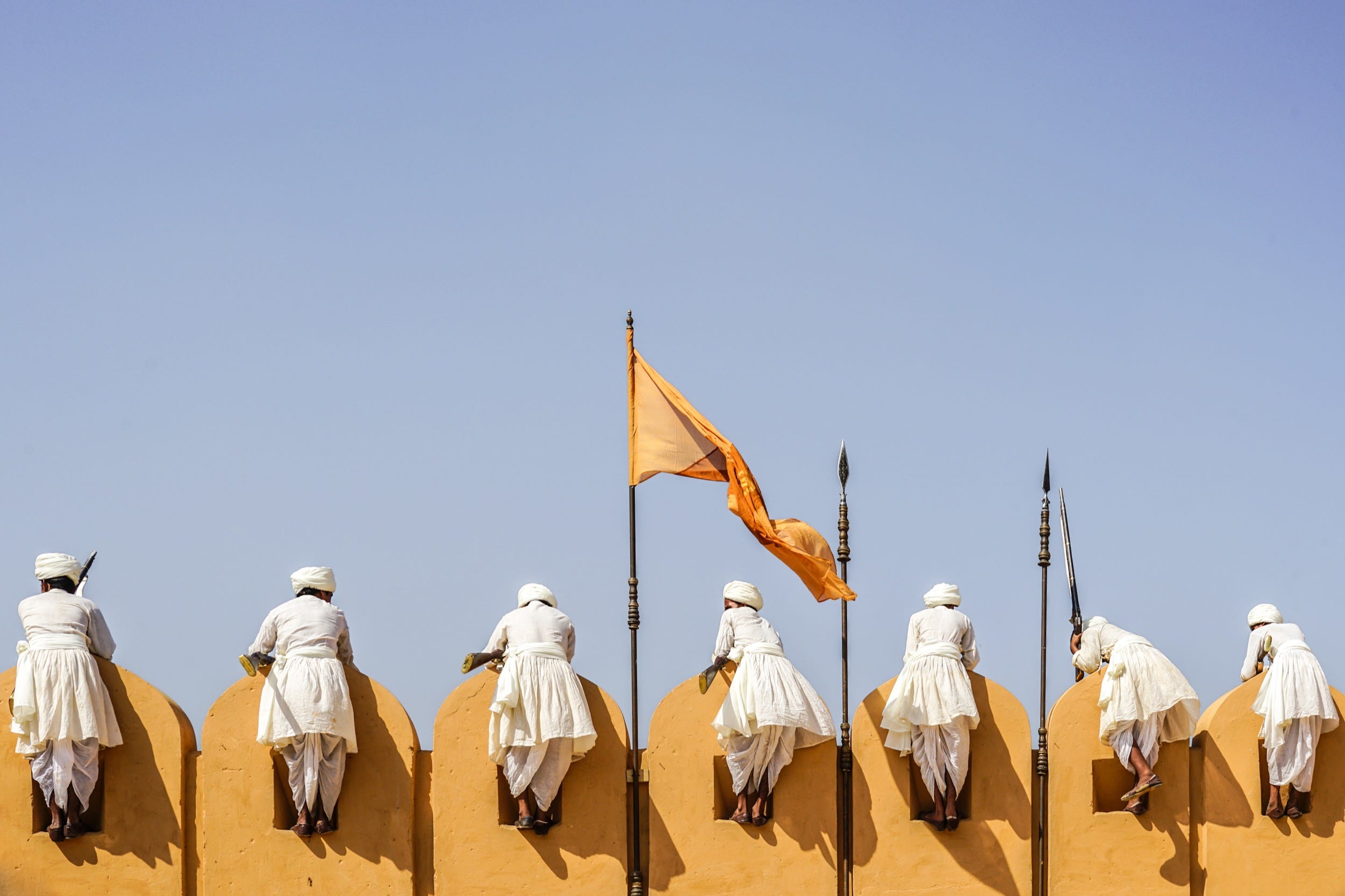 From the book: “Built in 1592, the massive royal palace & military stronghold, features incredibly absurd attention to clever details you would never know about from looking at the exterior architecture.” 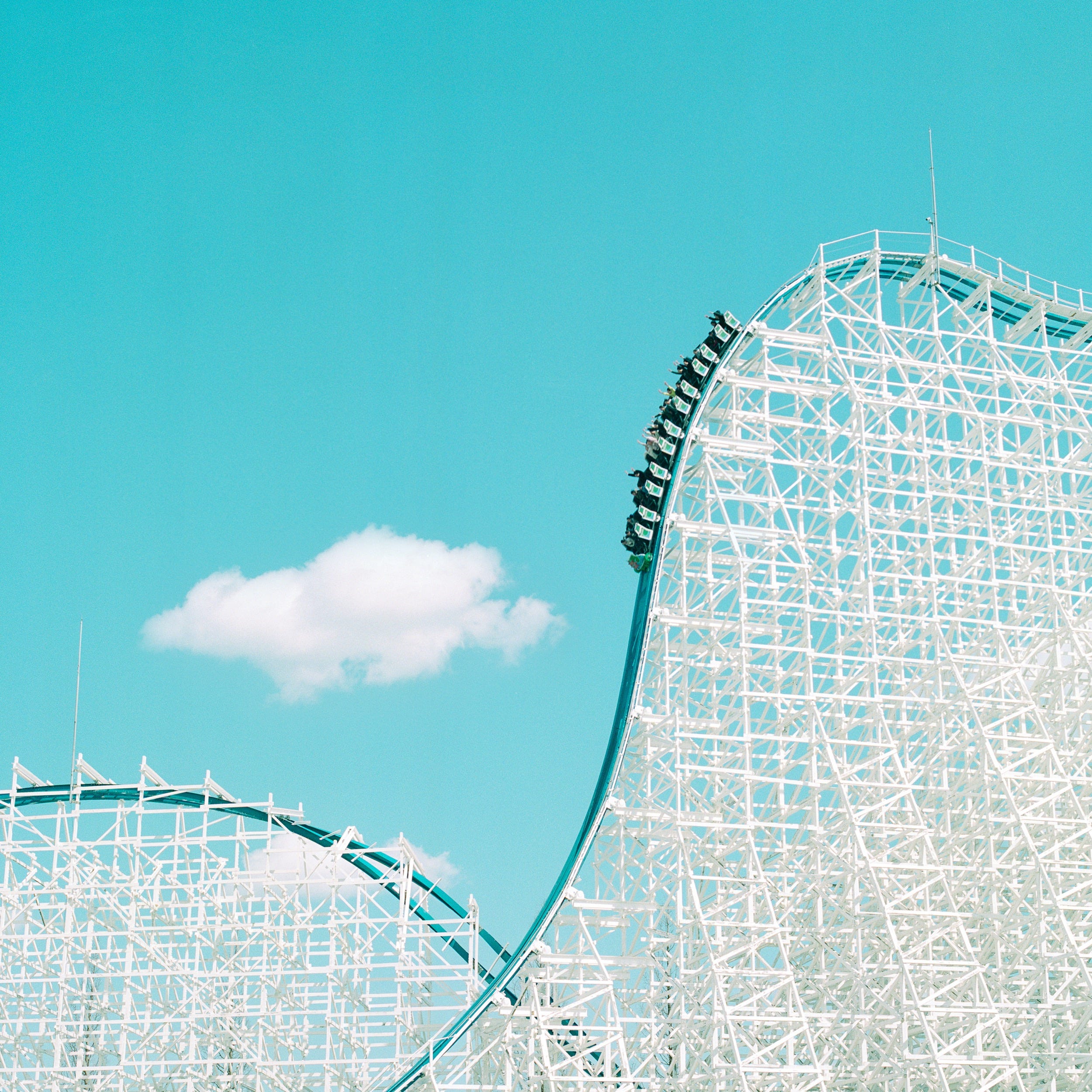 From the book: “Wooden coasters are extremely rare in Japan, a country with strong regulations on tree felling; the Cyclone was constructed with enough timber to build nearly a thousand homes.” 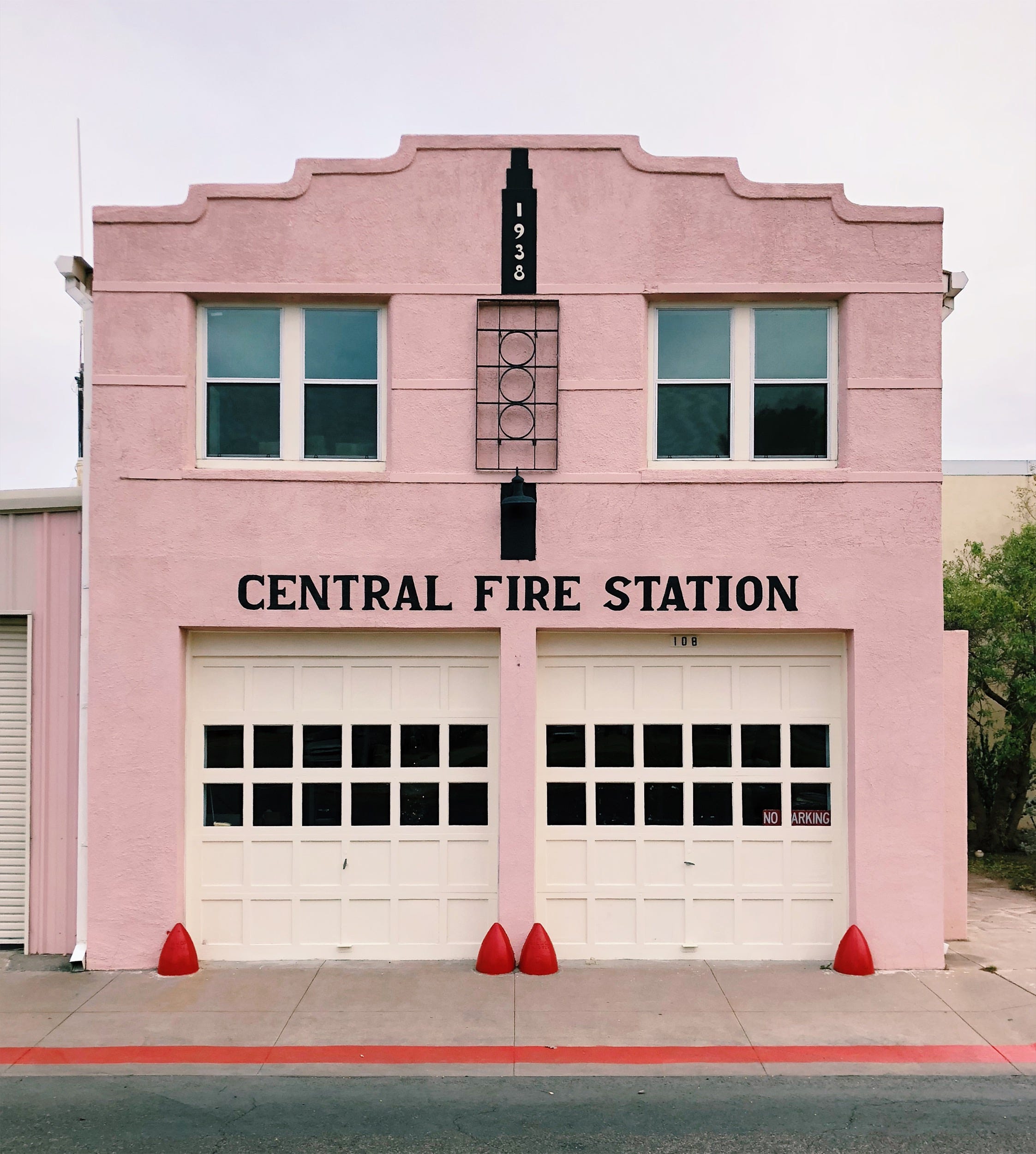 From the book: “Marfa, Texas was founded in 1883 as a water stop to replenish the steam engines running trains between San Antonio and El Paso. Its name actually means ‘Martha’ in Russian and was named for an unlikely character.” 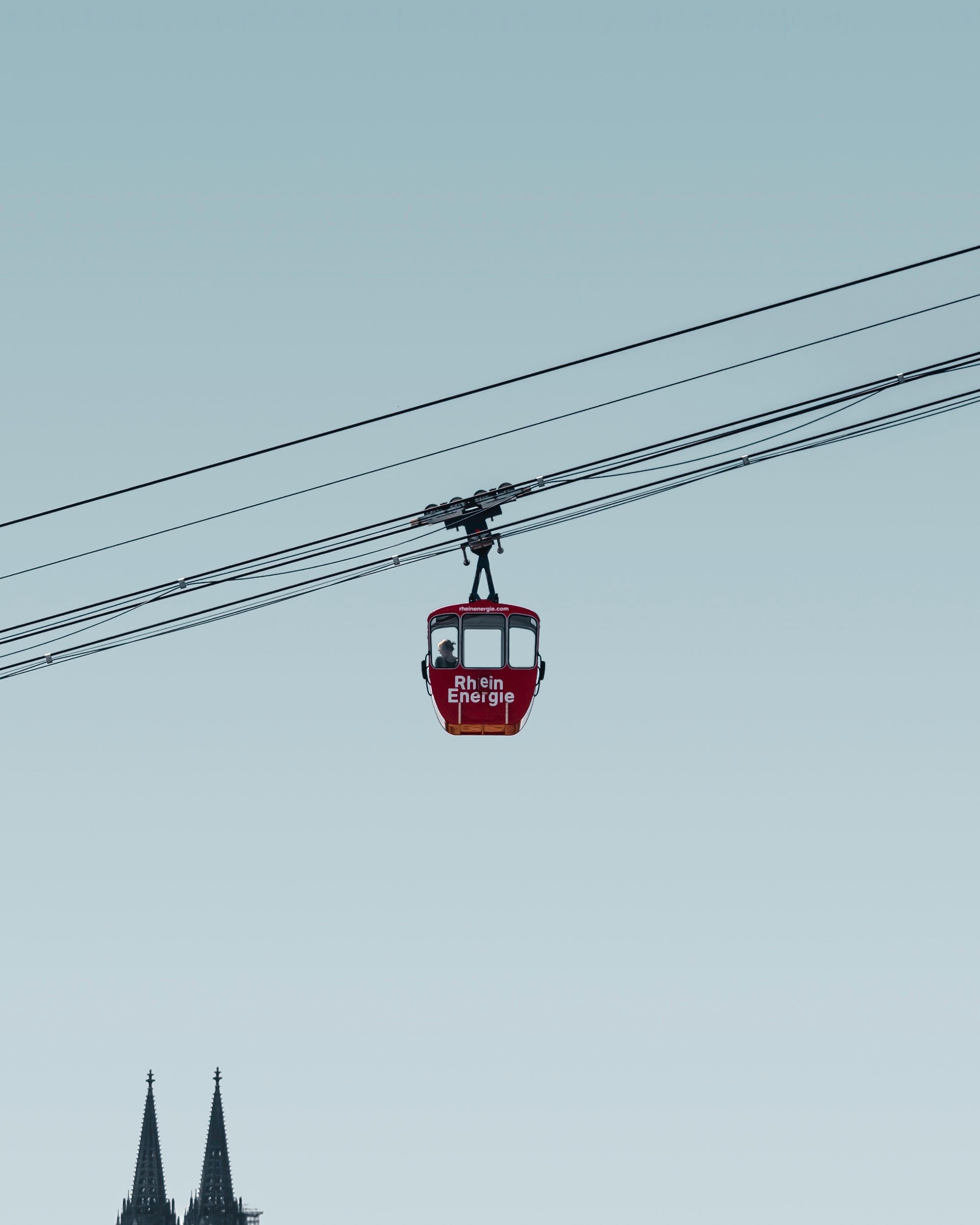 From the book: “The Cologne Cable Car company (Kölner Seilbahn or Rheinseilbahn) carries bright-red four-seat gondolas on a fifteen-minute, half-mile journey above the Rhine River.” 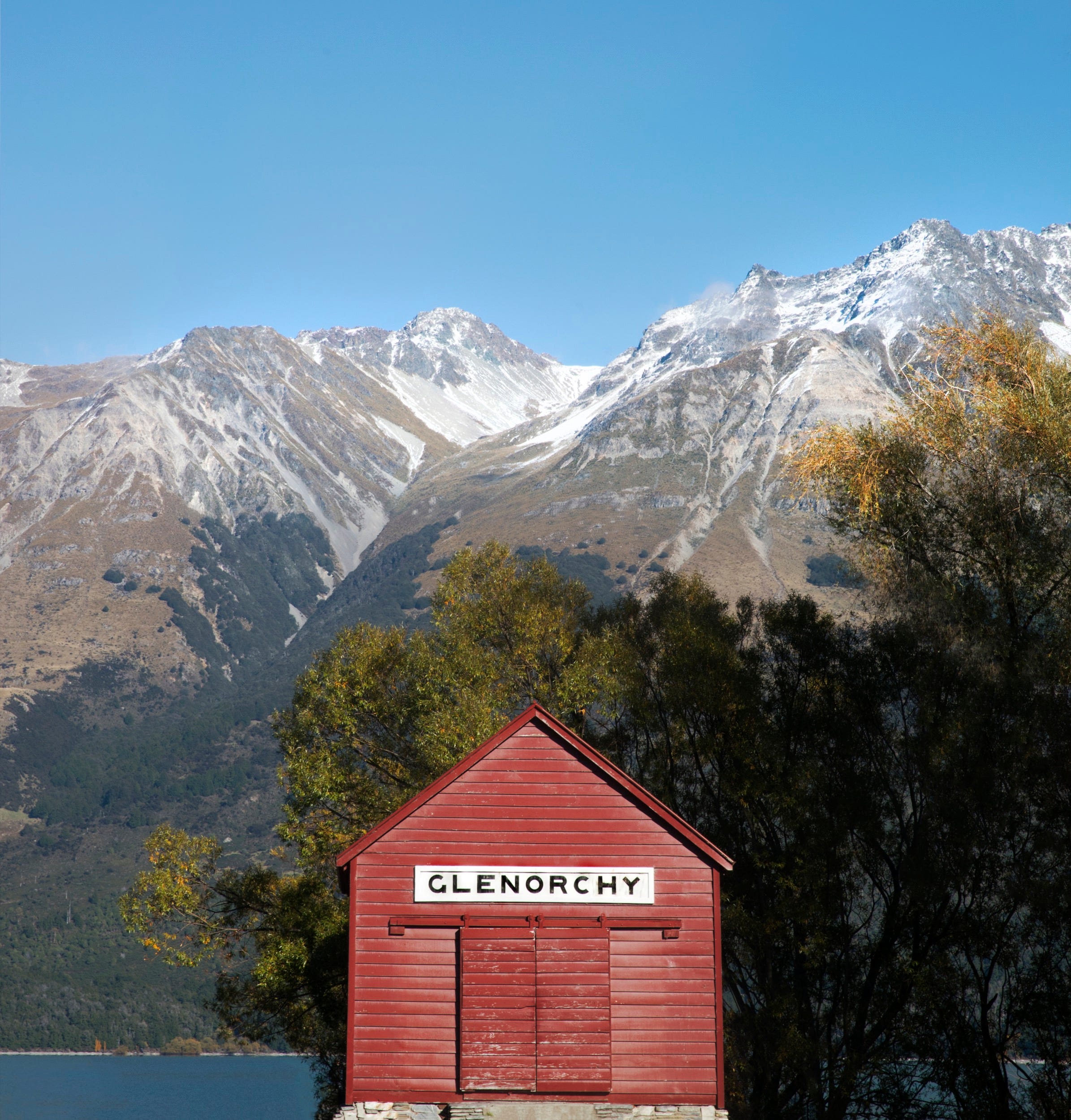 From the book: “By the mid-1950s, the 250 full-time citizens of the town came together and initiated a push for a road to connect Glenorchy to Queenstown. Though supported by many, the execution of the project was engineered by two remarkable individuals, each fueled by willpower and love … with extra assistance from a nudge of fate.” 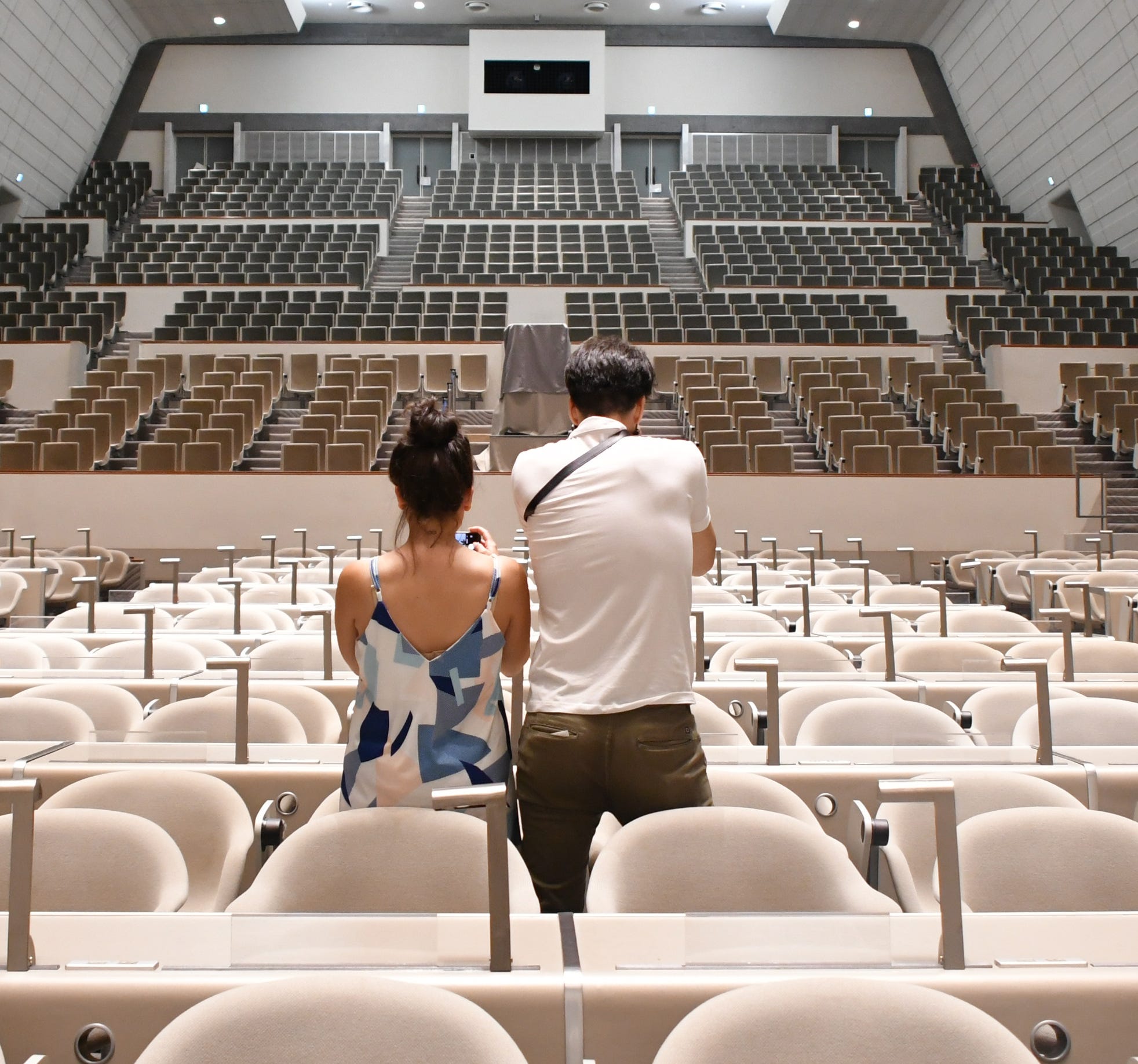 Wally Koval (right) and his wife, Amanda, are the masterminds behind Accidentally Wes Anderson.

“What we try to put out there is this moment of delight,” he said of the images he and Amanda post. “It doesn’t have to put a giant smile on your face. It doesn’t have to make you jump up and down for joy. It’s not this, you know, big experience. It’s just [exhales sigh of relief] ‘Oh, that’s nice.’ That’s not something that we get anymore. Nobody has that. In the world, it’s not a normal feeling anymore.”