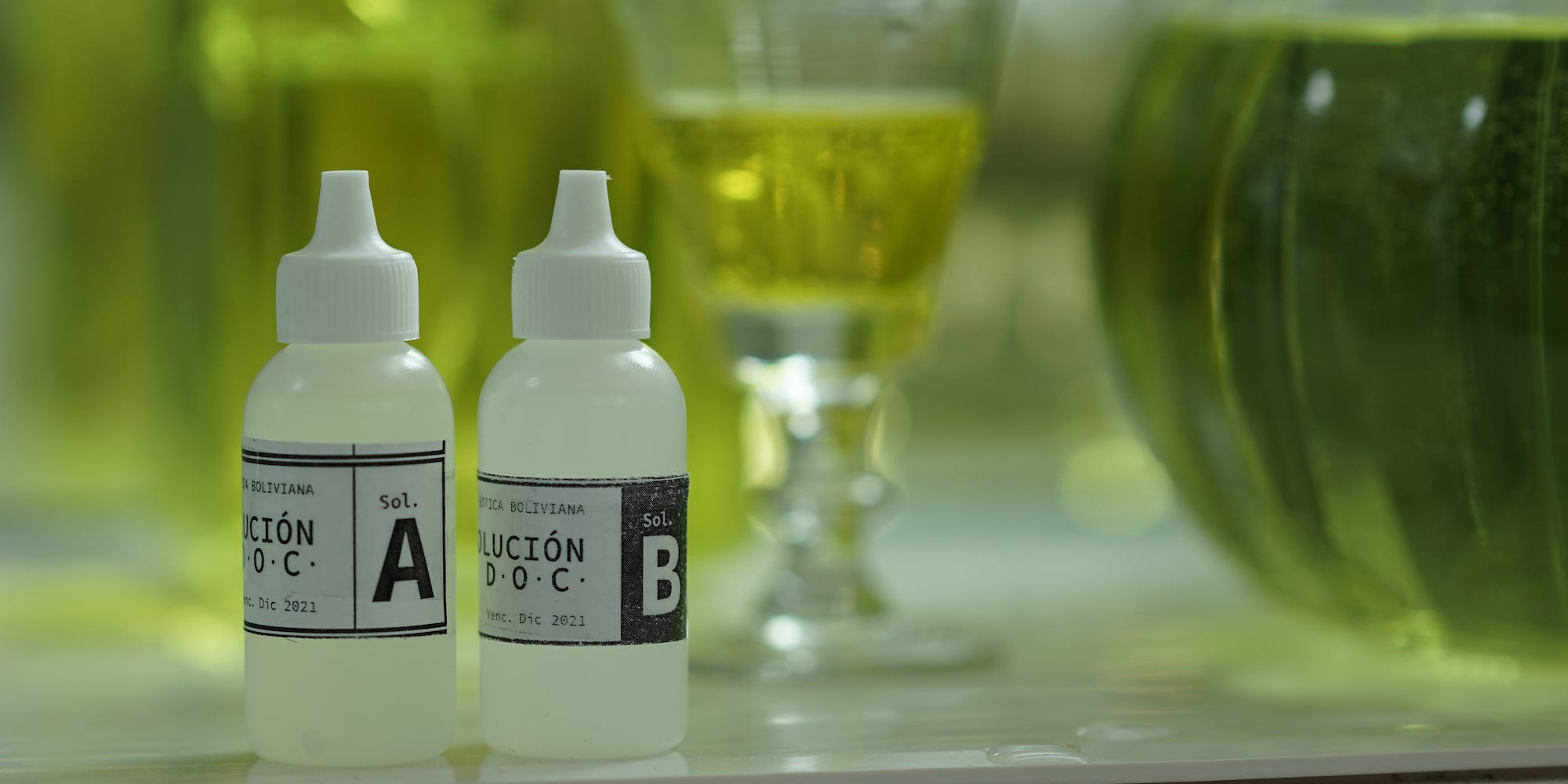 "Medicine" containing chlorine dioxide is seen at the Farmacia Boliviana in Cochabamba, Bolivia.

A movement that claims industrial bleach is a miracle cure is gaining strength in Latin America.
The Bolivian government's endorsement of the substance has given it the appearance of credibility.
It's a stark illustration of how the pandemic has been used to spread medical misinformation.
See more stories on Insider's business page.

Last month, the Justice Department announced the indictment of a Florida man, Mark Grenon, and his three adult sons for allegedly marketing a type of toxic bleach, chlorine dioxide, as a COVID-19 cure.

For several years, the indictment said, Grenon sold the bleach under the guise of a church called Genesis II. He told prosecutors that the church "has nothing to do with religion," and that he founded it to "legalize the use of MMS" and avoid "going to jail."

MMS stands for "Miracle Mineral Solution," the name Grenon's believers use for toxic bleach. The substance is usually used to treat wood products, has no medical value, and can be fatal if consumed in large doses. MMS followers believe it has healing powers.

The indictment might have marked the end of Grenon's attempts to falsely market the bleach as a miracle cure.

But over in Latin America, the legacy of Grenon's Genesis II church is stronger than ever. It is perhaps one of the most shocking triumphs of a medical misinformation movement to date. 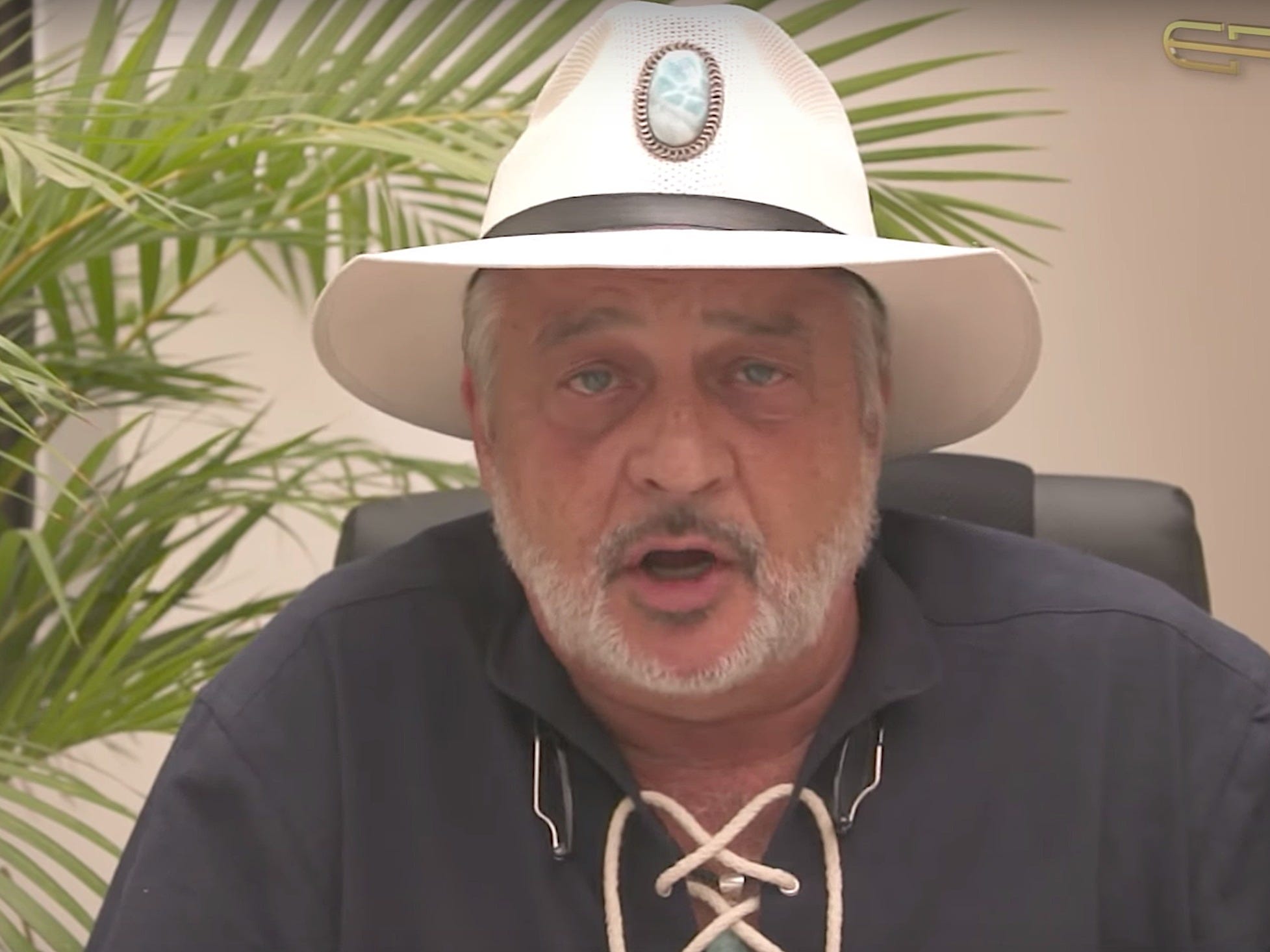 The movement has enlisted the support of politicians, army officers, local celebrities, and a group of renegade medics who call themselves the Global Health and Life Coalition, or Coalición Mundial Salud y Vida (COMUSAV) in Spanish. COMUSAV is run by Patricia Callisperis, a Bolivian medic.

The movement has prompted warnings from the Pan American Health Organization and Spain's medical watchdog, the Organización Médica Colegial, that the substance has no proven medical benefits and can be deadly. Several national health ministries in South America, including Bolivia, have also issued warnings about consuming the bleach.

Yet the movement has gained ground, activists told Insider, sweeping through parts of the region where access to healthcare is limited, and distrust of authorities is widespread.

A vast new market for the bleach treatment

Andreas Kalcker, a self-described biophysicist, is a longtime associate of Genesis II. For years he has promoted chlorine dioxide treatments – which he calls CDS – on his website and social media.

He has no medical credentials, and has used fake certificates bought online to pass himself off as an expert, the Irish broadcaster RTÉ reported in 2015.

Last year Insider documented how he played a key role in popularizing the substance during the height of the COVID-19 pandemic in Bolivia in TV appearances and on Facebook.

Kalcker has found so much success in hawking the substance in Bolivia that the left-wing MAS political party approved it as an official COVID-19 treatment last year, in an effort to politically capitalize on the popularity. 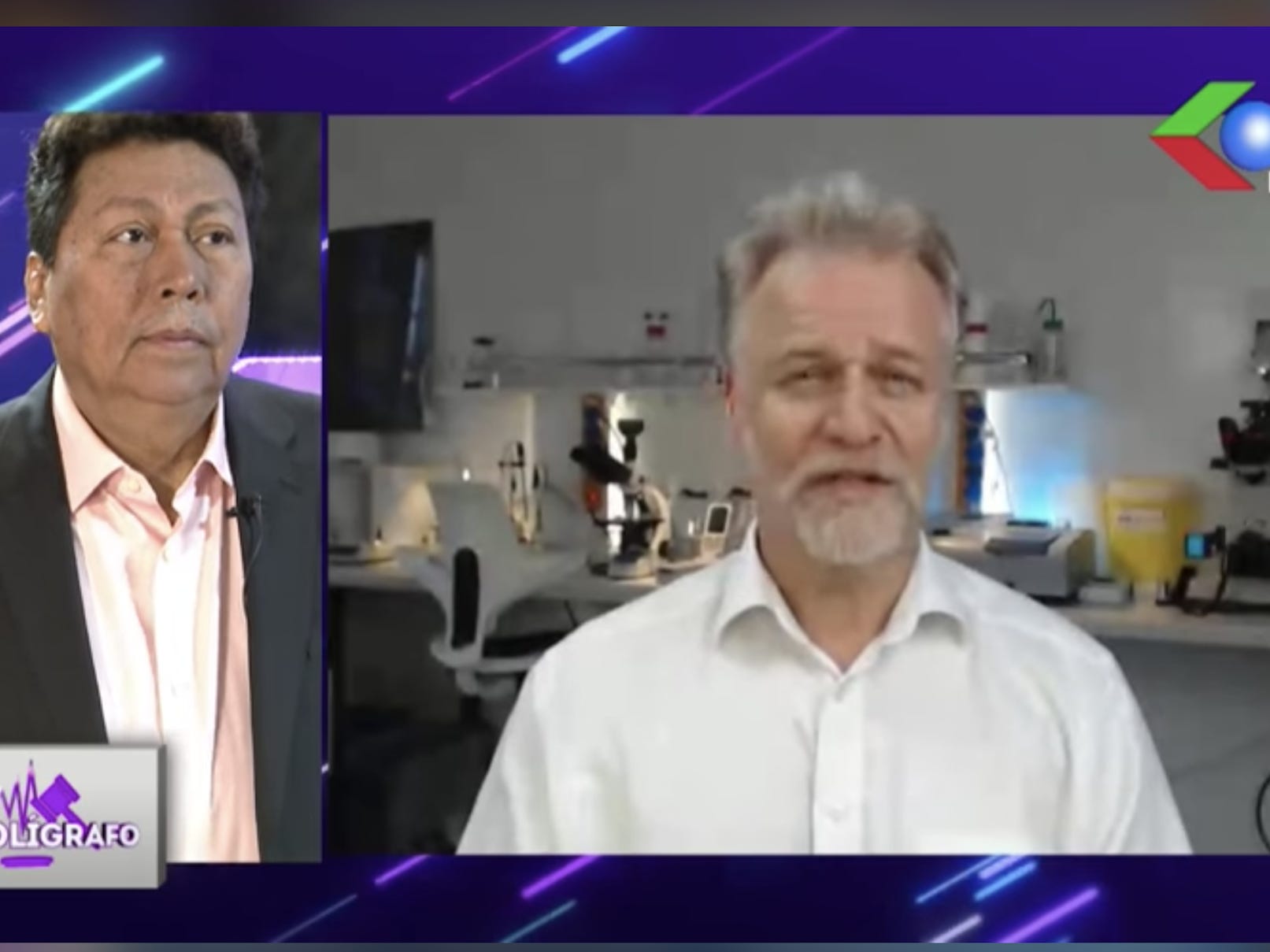 It was in Bolivia that Kalcker partnered with COMUSAV to champion the bleach.

In March, in a hotel in the Bolivian city of Santa Cruz de la Sierra, COMUSAV held what it billed as the largest conference yet on the medical use of chlorine dioxide.

It featured seminars on how to use toxic bleach to treat autism and during pregnancies, and attracted advocates of the substance from countries including Mexico, Argentina, and Peru.

Prominent members of Genesis II were listed as contributors at the event. They included the church's founder, Jim Humble, a former Scientologist who claimed to have discovered the bleach's healing powers on a jungle mission; and Kerri Rivera, a Canadian who has marketed bleach "enemas" for autistic children.

Humble, Kalcker, and Rivera have all been ousted from most mainstream social-media platforms. Insider last year revealed that Rivera was selling the bleach on Telegram, the encrypted app that's also been a refuge for ISIS terrorists and the far right.

Neither Kalcker, Humble, nor Rivera responded to Insider's multiple requests for comment for this story.

While the COMUSAV conference was being held, Kalcker also embarked on a tour of Bolivian public universities, championing the toxic substance which he claims is being suppressed as part of a conspiracy by global elites.

It was part of a renewed effort to capitalize on the substance's popularity in the pandemic and to expand the movement, with COMUSAV groups springing up in countries across the region.

Some public university labs in Bolivia have even started making chlorine dioxide for pharmacies, a clear sign of the support authorities have given to the dangerous campaign. 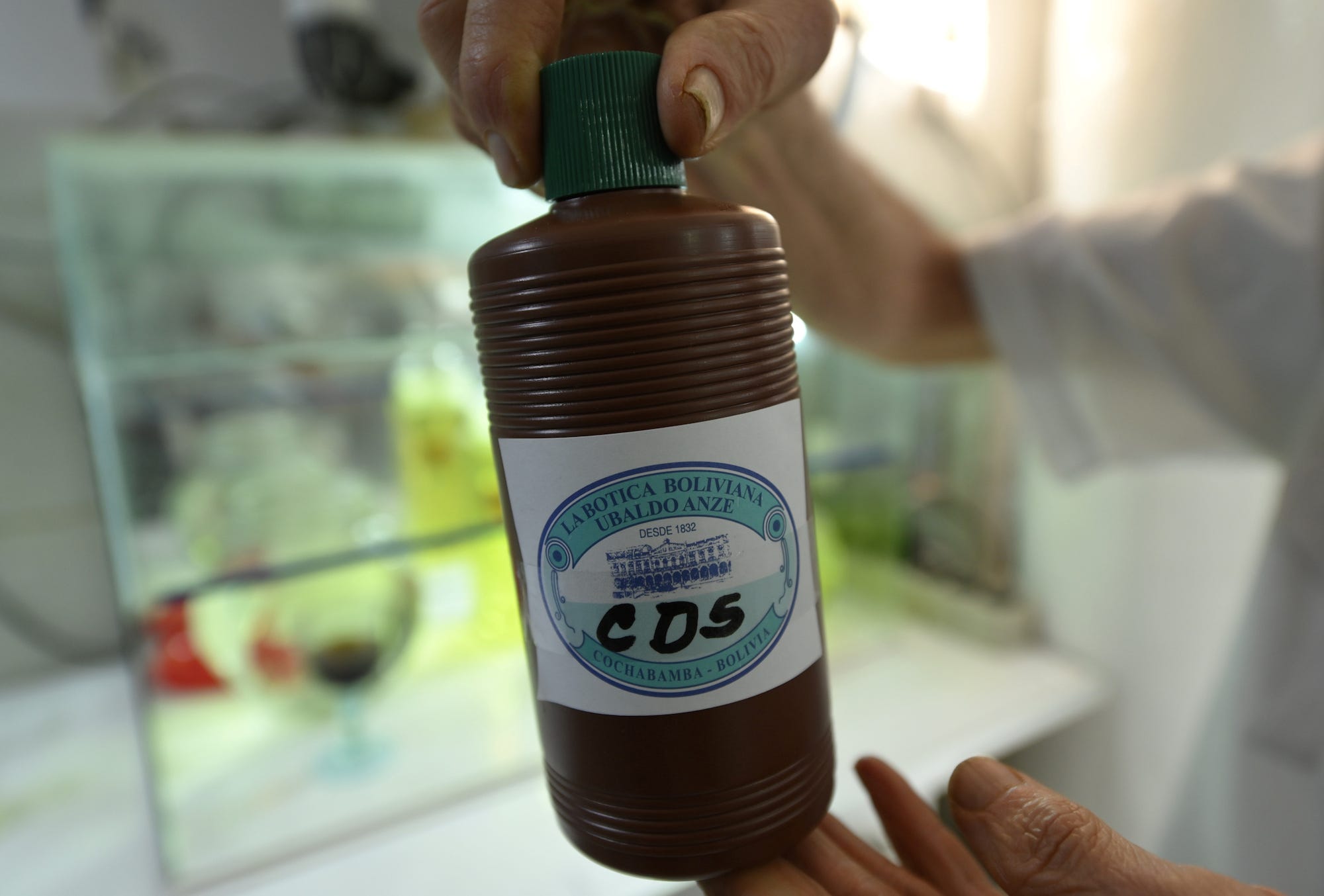 A pharmacist holds a bottle containing chlorine dioxide at the Farmacia Boliviana in Cochabamba, Bolivia.

It's not just in Bolivia where toxic bleach has champions at the highest political levels. In May, Peru's congress launched an official inquiry to establish if the substance can cure COVID-19, Vice News reported.

But it's in Mexico, the second-most populous Latin American country, that the movement is spreading most quickly, said the founder of Anticlo2, an activist group tracking the spread of COVID-19 misinformation in Latin America on the Discord app. Insider is withholding the activist's identity because of threats to their security.

"Measuring popularity can be difficult as there are no official numbers. But I take as a metric the number of points of sale that they advertise," the activist said. "And in recent months they are advertising many more points of sale in Mexico than before."

Advocates of chlorine dioxide have enlisted the support not just of politicians and medics, but also of media figures and influencers across the region, to popularize the substance:

In Colombia, when the model and DJ Natalia París was criticized for hosting a January party on a private yacht in violation of COVID-19 rules, she claimed that the chlorine dioxide she had consumed protected her and guests from infection. Days later, country authorities ordered her to stop promoting the bleach on social media.In Mexico, the actor Verónica del Castillo and an army officer, Coronel Pedro Chavez Zabala, have recommended taking the bleach at press events and on social media.And in Argentina, a TV host drank from a bottle of the bleach live on air last August, as seen here:-Cristian (@Cristian_2_27) August 6, 2020

Another member of Anticlo2, based in Mexico, told Insider that the popularity of the substance was mainly spreading in rural communities, and being promoted and sold on social media. This activist also requested to remain anonymous for safety reasons, but their identity is known to Insider.

"The main problem is in small towns where the majority of people only have basic education, since people stop vaccinating at the request of rural doctors who use false news and misinformation about vaccines to offer ClO2 [chlorine dioxide] as a remedy," the activist said.

Children have died after consuming the bleach

The impact of the wave of MMS misinformation in Latin America is unclear, but reports continue to emerge of fatalities caused to those who've consumed chlorine dioxide.

Local media in Oruro, southern Bolivia, reported in March that 85% of people who died with COVID-19 after being admitted to the ICU had taken chlorine dioxide.

In February, authorities in Argentina opened an investigation into Kalcker and several Argentinian nationals after a man, 50, and a boy, 5, died after consuming the bleach.

And last week, an eight-month-old baby in the Argentinian city of Rosario was hospitalized after consuming the bleach in a bottle prepared by her mother. The woman said she had given the child the substance by accident.

The success of the movement can be partly attributed to Facebook's failure to take action quickly, critics said.

On Facebook, MMS advocates have been able to profit from the sales of the bleach, linking to pages where it can be bought, directing people to private chats to negotiate sales, and charging around $60 for video "consultations" on how to take the bleach, the Anticlo2 activists said.

Despite Facebook's banning misinformation about the COVID-19 pandemic from its platform, COMUSAV has been able to openly promotes the toxic bleach in national, local, and regional groups.

Several such groups, with tens of thousands of members, were removed by the site after an Insider investigation in March. But since then, many more have emerged, raising questions about the site's willingness to proactively enforce its disinformation policies.

Carmen Scurato, a senior counsel at the Free Press nonprofit, said Facebook has been slow to remove disinformation and misinformation that aren't in English.

"One of the things that we found in our research was that when Facebook in particular said we got rid of misinformation, they did not replicate those enforcement actions in Spanish or in other languages. So that content was still able to spread on the platform, just not so much in English," she told Insider.

Facebook removed the new groups when Insider alerted the platform to their presence.

"We have taken action on the accounts, Pages, and Groups brought to our attention for violating our policies. We have over 35,000 people dedicated to keep our community safe, a task particularly important during the COVID19 pandemic," a company spokesman said.

Infighting and divisions, but the movement remains strong

As the movement gains strength in Latin America, it appears to be marred by infighting and even a schism, said the Anticlo2 activists.

They told Insider that Kalcker now leads a group focused on promoting MMS in Mexico, while another group, led by the COMUSAV founder Patricia Callisperis, was promoting it in several other countries.

The groups operate separately, the activists said, but the movement remains powerful, and both groups are both profiting from the spread of misinformation about chlorine dioxide.

In a statement to Insider, Callisperis denied falling out with Kalcker, but distanced herself from him.

"He simply does not understand scientific research and published together with others an article not authorized by the Bolivian team," she said.

Jim Humble, the secretive founder of the Genesis II church, has also been playing an increasingly important role in promoting MMS for Callisperis' group, the Anticlo2 founder said. They pointed to a lengthy speech delivered by Humble at the COMUSAV conference in March, which was streamed by several COMUSAV Facebook groups.

Callisperis denied the claim, saying: "Jim has nothing to do with COMUSAV."

How will this end?

The success of the MMS movement shows the double-sided effect the pandemic has had on medical misinformation.

For some of its promoters, like Grenon, the pandemic has brought new, negative attention from law enforcement. But others, like Kalcker, have been able to exploit people's fears in the pandemic and, aided by the laxness of social-media giants in enforcing policies and the cynicism of political actors, have turbocharged their movements.

Where do they go from here? The founder of Anticlo2 warned of the movement's continued rise, saying governments across Latin America were underestimating the danger the activists pose.

"I think the MMS is going to continue spreading because in no country in the region are they connecting the dots. Nobody is noticing the international reach it has, all countries are underestimating it," they said.

"Latin American countries do not realize that the promoters of MMS capitalize on the fear that the pandemic generates in some sectors of the people."