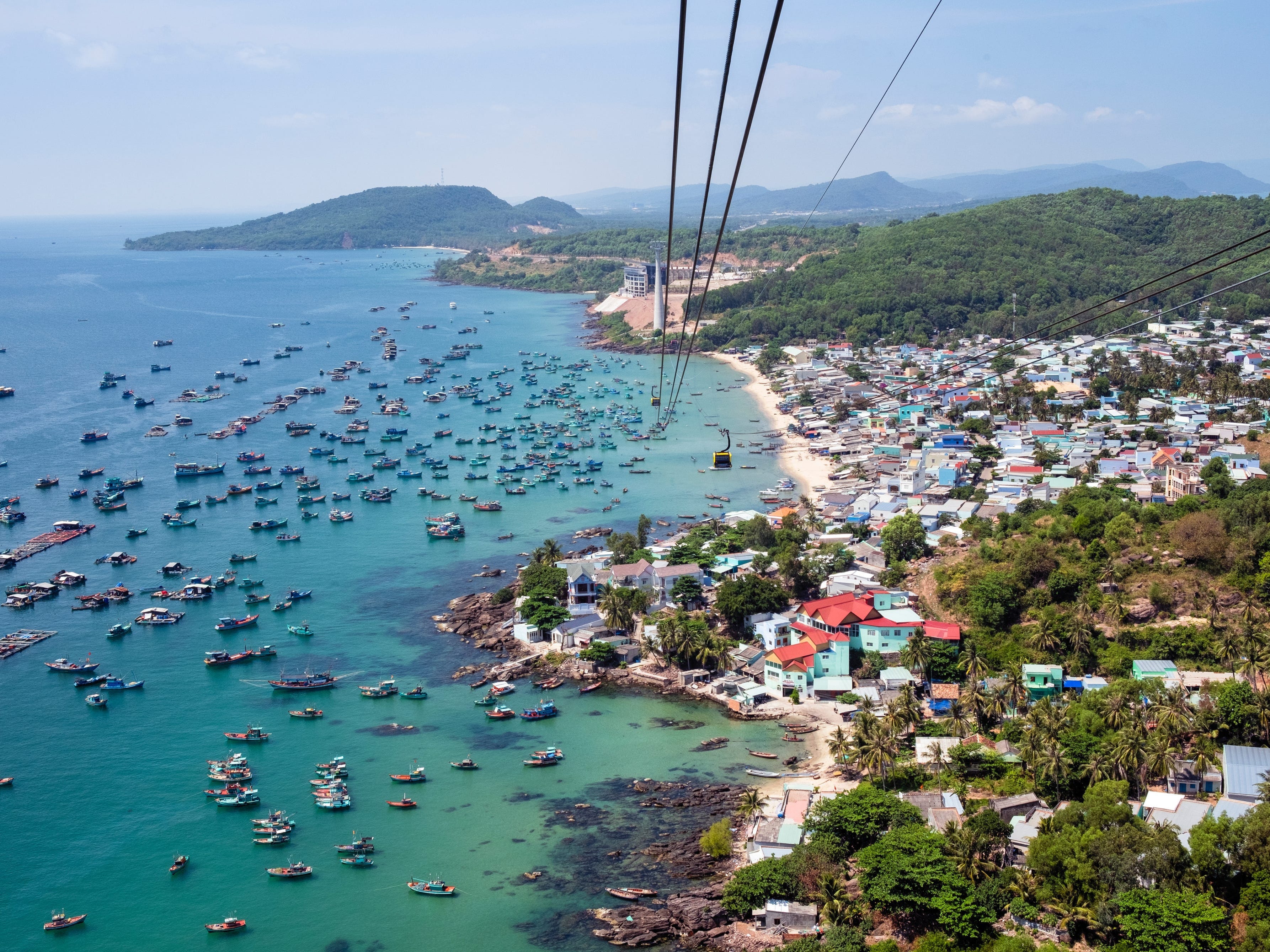 Travelers who arrive on the Southeast Asian island of Phu Quoc may be forgiven for thinking they are in Venice, the Amalfi Coast, or Paris – anywhere but Vietnam.

When Ken Atkinson first visited the Vietnamese island of Phu Quoc in 2003, he was struck by its beauty.

"It was similar to Phuket or Samui when these Thai islands started from nothing," Atkinson said of the island, which is southwest of Vietnam. The executive chairman of Grant Thornton Vietnam, Atkinson has been based in Ho Chi Minh City for more than two decades.

Hawksbill and green turtles nested on its white-sand beaches. Crystal-clear waters teemed with coral reefs. Much of the 593-square-kilometer island was covered with forest ecosystems. There were no more than 45,000 residents then, and their key occupations included fishing, producing Vietnam's best seafood and fish sauce, cultivating green pepper, and farming pearls. The nature on Phu Quoc (pronounced foo kwok) was flourishing so richly that UNESCO designated the island a biosphere reserve in 2006.

"To me, it was a diamond in the rough," said Atkinson. "There was a great opportunity to develop Phu Quoc into something spectacular in Vietnam."

Fast forward to 2021, and Vietnam's biggest island has indeed been developed into something new – but it's also become something unrecognizable.

Previously, Phu Quoc was likely to be mentioned in the same breath as Bali or South Korea's Jeju – islands that promoted local culture as they developed their tourism scenes. Now Vietnam's largest island is more likely to be compared to Las Vegas or China's Hainan. Phu Quoc is on steroids with the kind of development that's already threatening its seductive image as the "last paradise" of Vietnam.

Thousands of hotel rooms, condotel units, and row upon row of cookie-cutter shophouses, villas, and residences are being built as far as the eye can see.

"They've got more rooms than Sydney, Australia. There's something like 30,000 hotel rooms, built, under construction, or in the planning stage," said Atkinson, whose firm provides financial advisory and transaction support to investors. "That's excluding Vingroup's 12,000 additional rooms, and before all the condotels, villa developments and residences, which means at least 40,000 hotel rooms."

So, what's lost when an island completely changes its identity in the course of 20 years – and who loses the most? Insider spoke to Vietnam's real estate, hotel investment, and relocation consultants, as well as tourism players, sustainable development experts, and locals in Phu Quoc to find out. 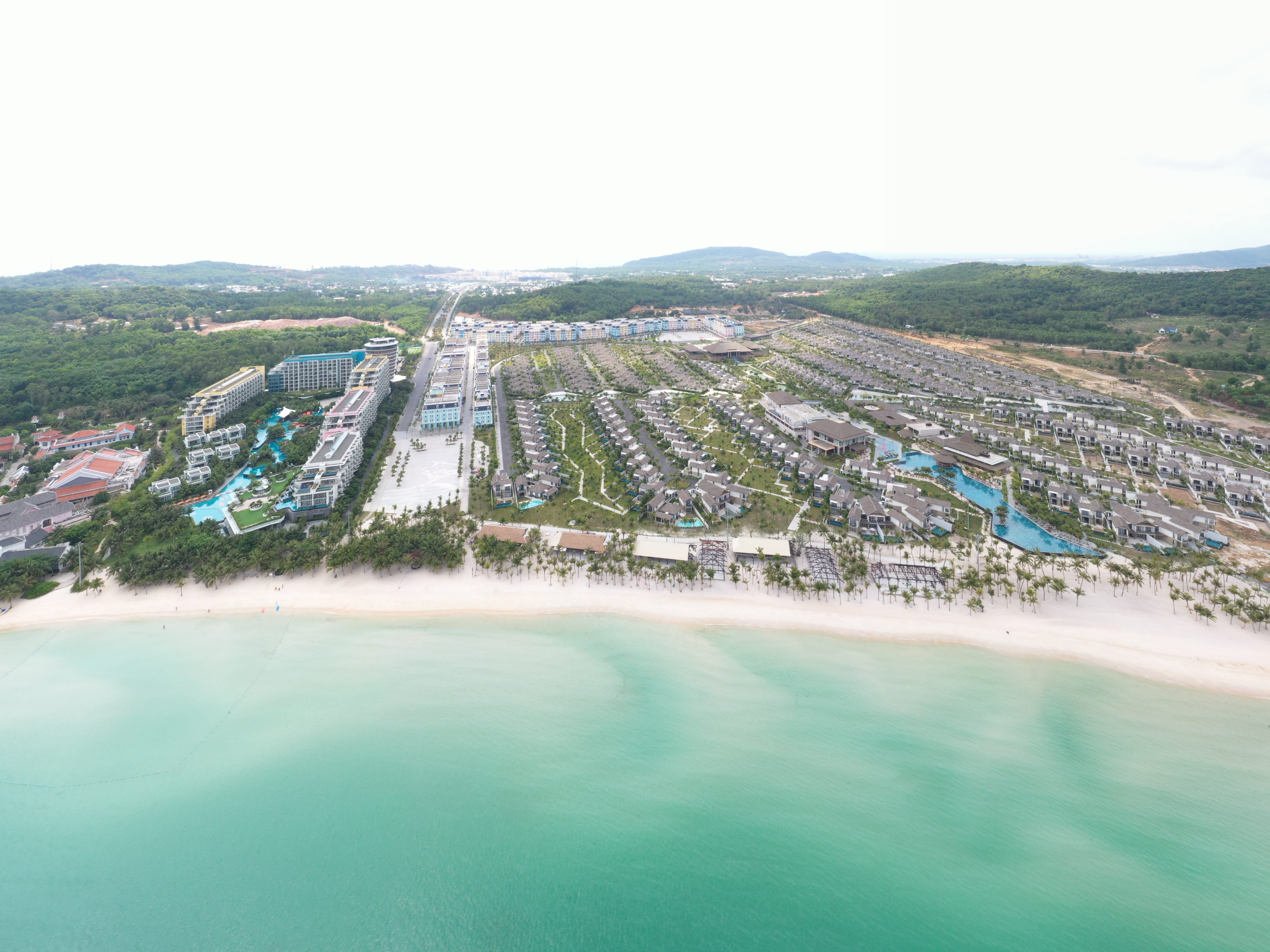 Development stretches as far as the eye can see on a Phu Quoc beach.

The new architects of Phu Quoc

James Clark, a Ho Chi Minh City resident since 2012, is the founder of the Future Southeast Asia newsletter. He told Insider he first visited the island in 2015.

"Since then, I've kept hearing reports of Phu Quoc's breakneck speed of development, along with the problems that go with such rapid over-development," Clark said. He revisited the island in March and was astonished by what he found.

The government, Clark said, is "intent on turning this once sleepy island into a 'sleepless city.'" 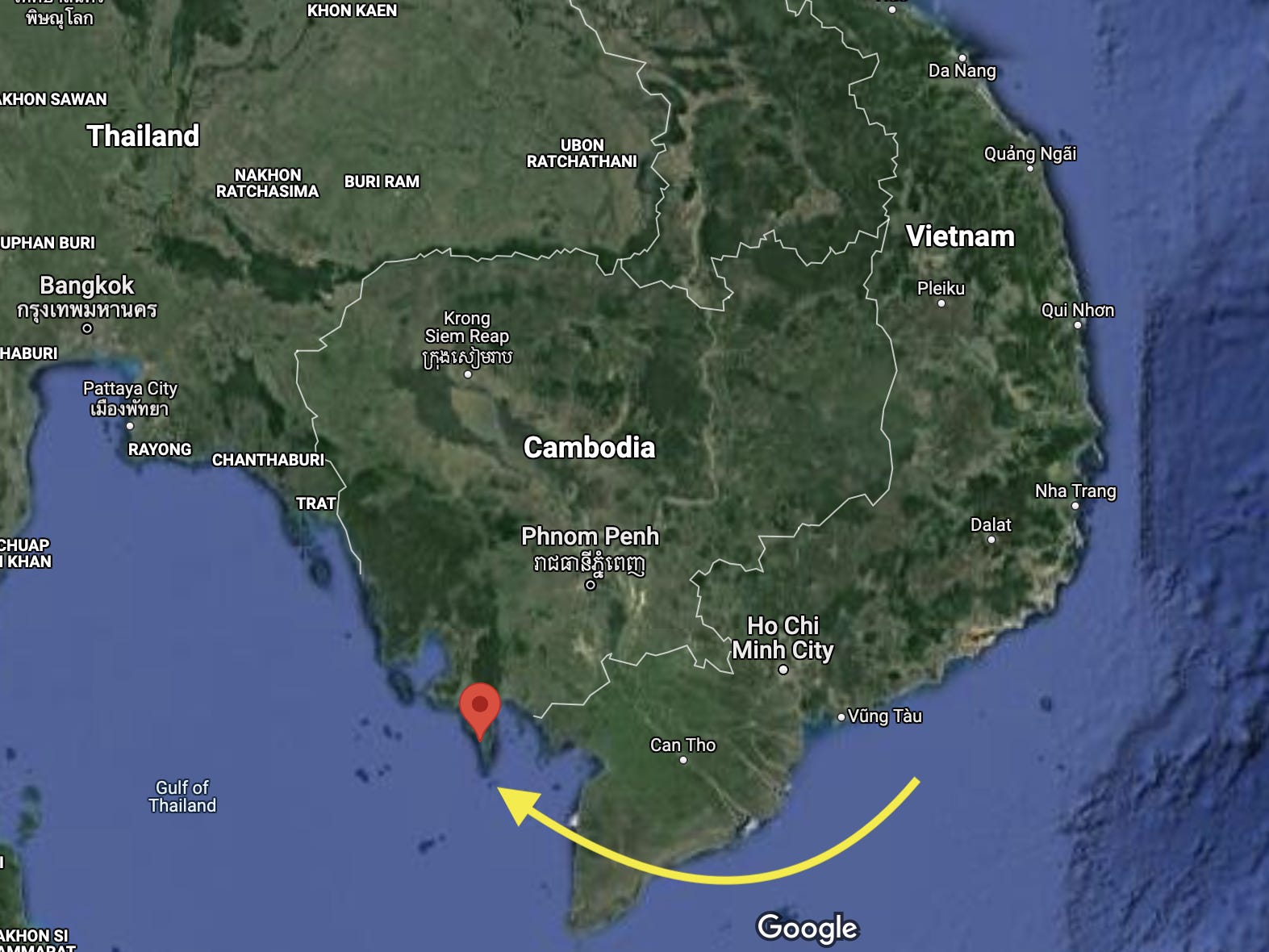 To date, Phu Quoc has attracted $16.5 billion in investments, according to an article endorsed by the Vietnam National Administration of Tourism. The bulk of investment is by big-name Vietnam developers. In April, Vingroup – Vietnam's largest conglomerate – opened a $2.8 billion "tourism-entertainment universe" spread over 1,000 hectares in northern Phu Quoc.

Called Phu Quoc United Center, the center of this universe is the Grand World "sleepless city." It's chock full of round-the-clock shows, Venetian-style shophouses and gondola rides, bars, clubs, and the Corona Casino – the only licensed casino in Vietnam – which promises to keep guests awake. 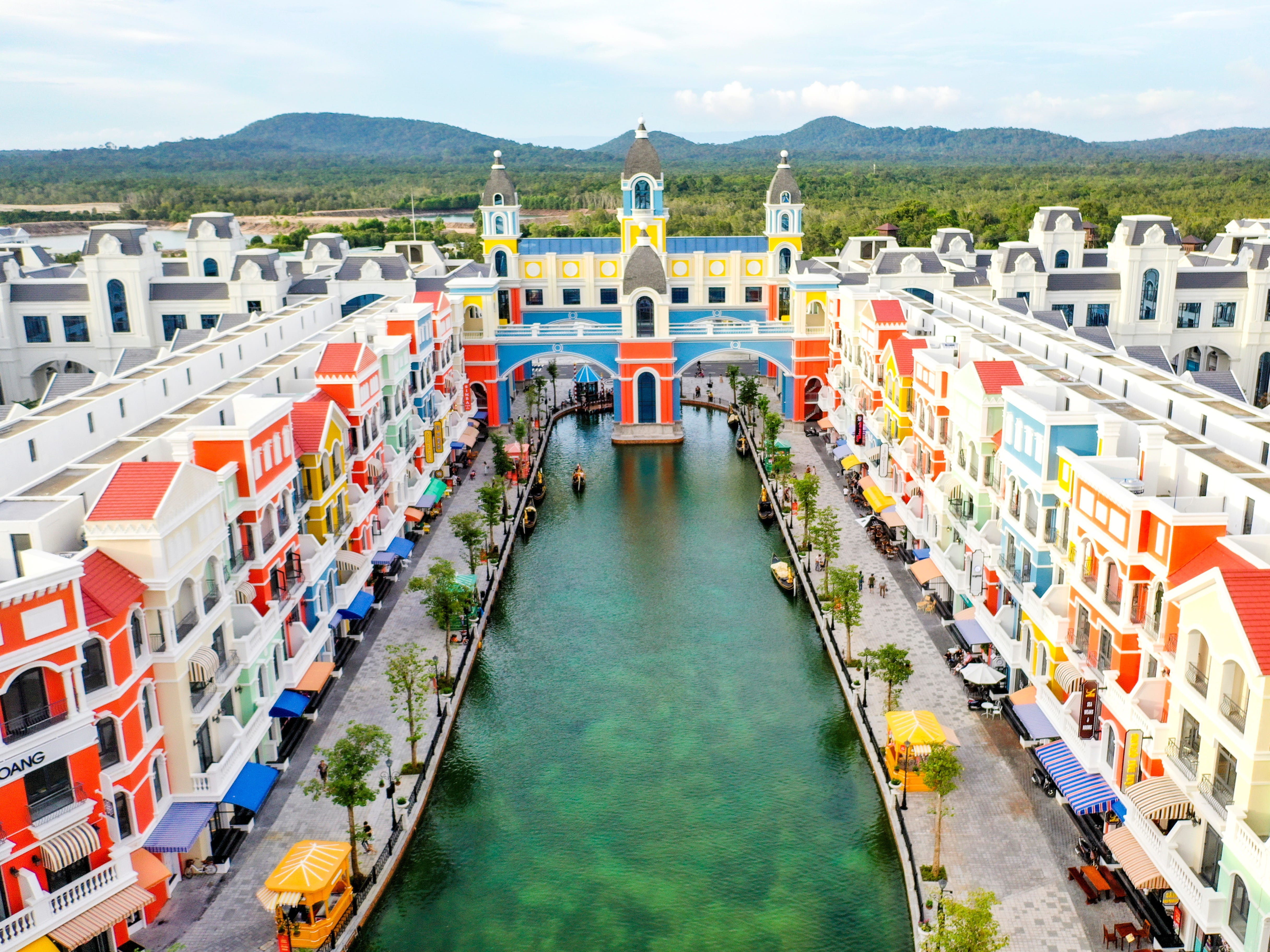 A canal on Phu Quoc is built up to look like Venice, replete with candy-colored storefronts.

"I have never seen anywhere in Southeast Asia that compares to what is going on here," Clark said.

Tu Quyen is one of those local residents. Her husband Tuan founded the first licensed tour company on the island, John's Tours Phu Quoc Travel Service, in 2006.

"He started by transferring guests by motorbike to attractions and hotels," she told Insider. "Then he made small connections with local fishing boat owners, taking guests to small islands to fish and snorkel."

"In the beginning, we had about 20 guests per day, mostly foreign visitors from Australia, the US, and Europe. There were no Vietnamese tourists," said Tu. In 2019, John's Tours handled 200 to 300 guests per day. In the peak period, those numbers reached as high as 500 to 700 guests a day.

"The development has helped the economy, and my company, a lot," said Tu. 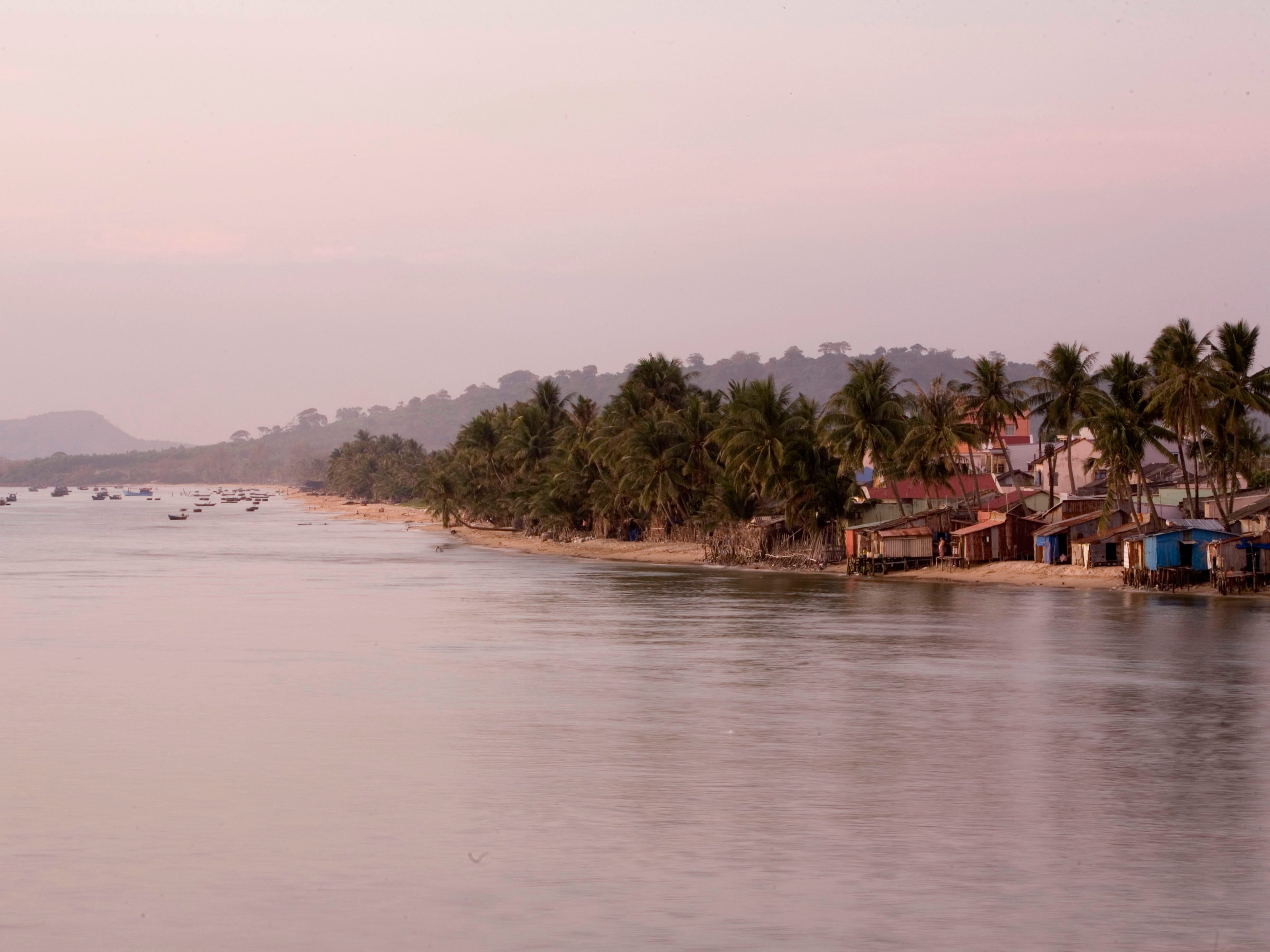 A Phu Quoc beach in 2009. The island has been developed into an unrecognizable version of itself.

The Phu Quoc International Airport opened in 2012, opening the floodgates for domestic tourism to the island. The airport primarily operates routes from Ho Chi Minh City and Hanoi. In 2018, plans were announced for a second runway and passenger terminal to handle 14 million passengers a year by 2030, up from four million currently, according to a Center for Aviation report.

Most of the projects appear to be aimed at the fast-growing Vietnam middle-class. Many of their websites are in Vietnamese. The vast majority of the five million visitors who visited in 2019 were locals, said the experts interviewed for this article.

Marco Foerster, who is half Vietnamese, works as an international business advisory manager for Dezan Shira & Associates in Ho Chi Minh City. The company helps foreign companies settle and grow in the region. He said projects like Vin's Grand World and Sun's Grand City provide the Vietnamese middle class with a "somewhat international and cosmopolitan tourist destination without them having to leave the country."

The developers seem to have a fascination with recreating European towns and resorts in Phu Quoc. Travelers who arrive on the Southeast Asian island may be forgiven for thinking they are in Venice, the Amalfi Coast, or Paris – anywhere but Vietnam. 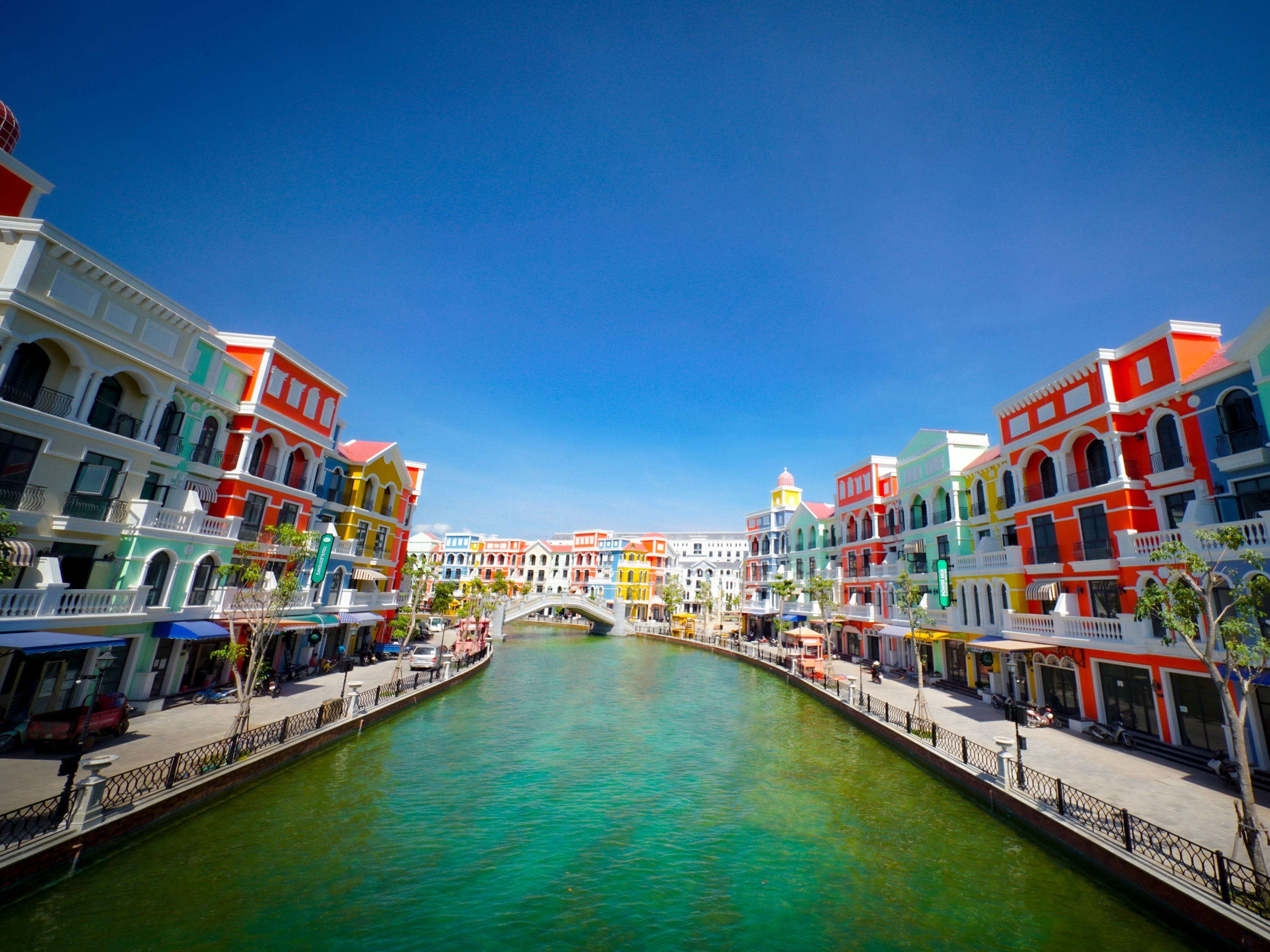 "Oftentimes a nice-looking backdrop suffices for social media posts and not much authenticity is required," Foerster added of the island's appeal to Vietnamese travelers.

The same, however, does not hold true of an international crowd, Foerster said: "International visitors visit Phu Quoc to experience Phu Quoc, not a colorful European town."

Jeff Redi, the managing director of Diethelm Travel Vietnam, had a similar perspective. "It might be nice for some people to see a replica of Venice or Firenze in Phu Quoc, but I doubt it is what international travelers are expecting to experience when in Vietnam."

Only qualified categories of foreign visitors have been allowed into the island since March 2020, with strict quarantine requirements. Vietnam is struggling with the highly contagious Delta variant and slow vaccination, which has clipped both international and domestic travel. Plans to use Phu Quoc as a pilot to reopen the country to international visitors in phases from October now look highly unlikely, according to Atkinson. 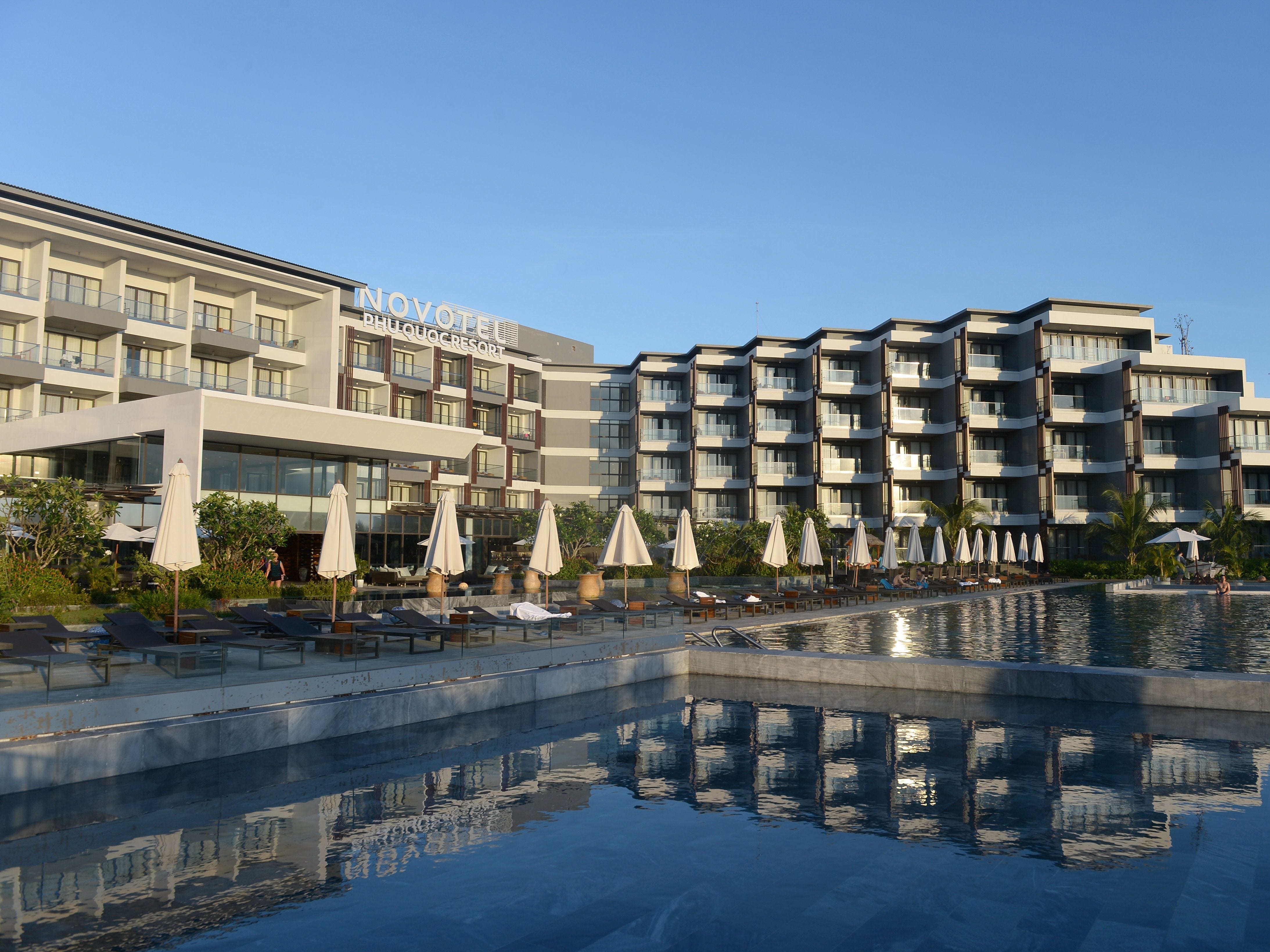 A new build hotel on Phu Quoc offers no sense of place.

The conflicting interests of domestic and international tourists is not the only problem Phu Quoc is facing. The island is also groaning under the weight of waste.

Nguyen Quynh, a project manager at the World Wide Fund for Nature (WWF) Vietnam, said the plastic waste generated by tourists has already been "distressingly overwhelming" to the ecosystem. The island, she said, has a shortage of landfills.

"Without proper action, those mountains of trash will soon become a threat to the island's burgeoning tourism sector," Quynh said. 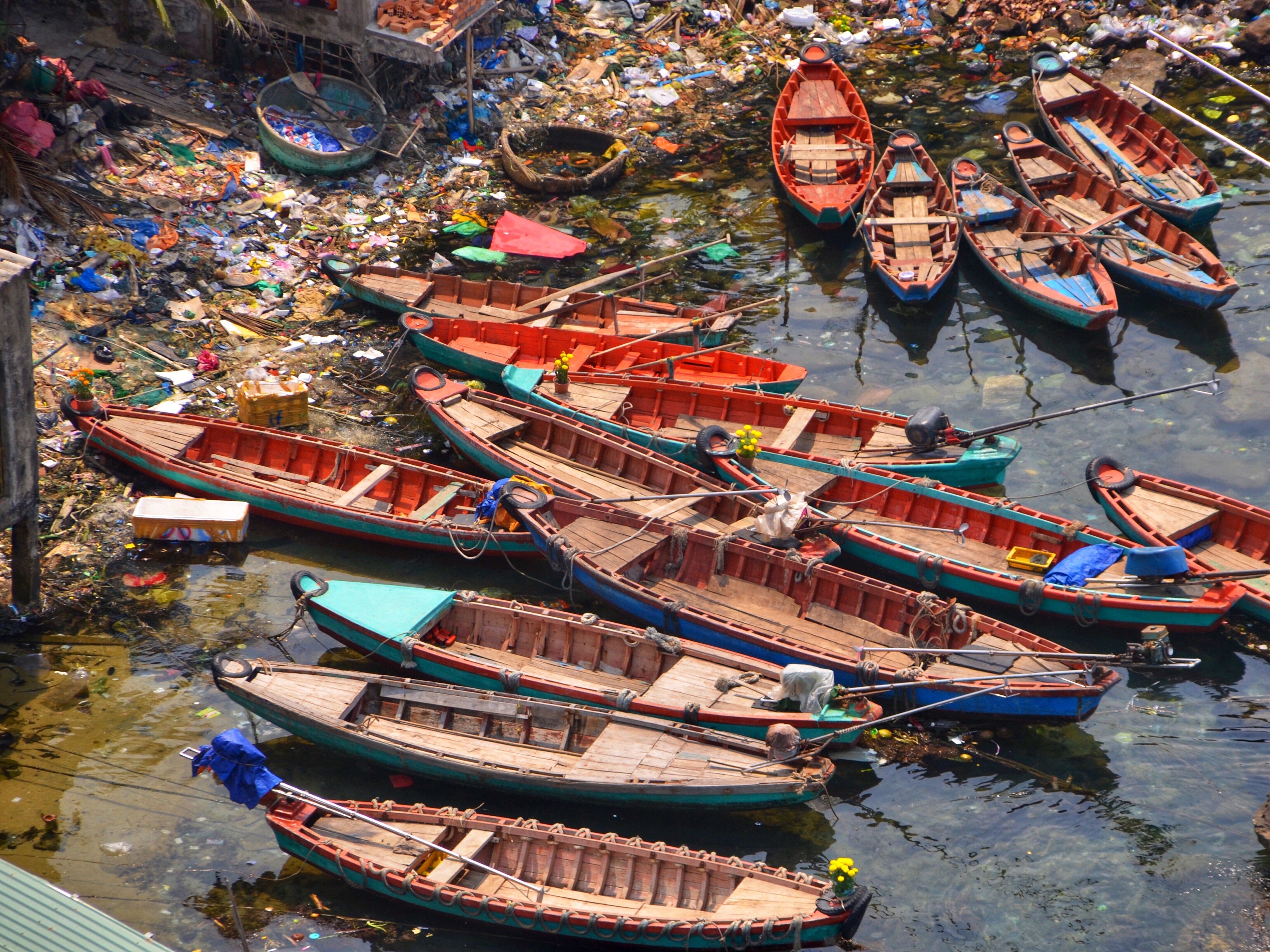 Phan Thanh Huyen, 23, works as secretary of the Board of Directors at Vinmec International Hospital in Phu Quoc. She told Insider the rapid change has created jobs for locals and boosted the island's education and healthcare systems.

Life is also more convenient, she said. For example, Phan now doesn't have to travel 25 kilometers to town to buy her favorite shampoo.

"Because of the development in the north, the biggest mart opened four months ago," she said. "Without the mart, I have to go to town or place an order online and wait one week for delivery."

But Phan also sees urbanization leading to a rise in crime and pollution on her island: "I'm afraid that Phu Quoc can't be as natural with fresh air, beautiful beach and forest as it used to be."

WWF, which has been focusing on plastic waste reduction in Phu Quoc since 2018, has seen some improvements. The city issued a plan to manage marine plastic waste by 2025 and local authorities are calling for investment in waste treatment facilities, Nguyen said. WWF's next project is to get the major developers and corporations on the island to invest in improving the protection of these areas. 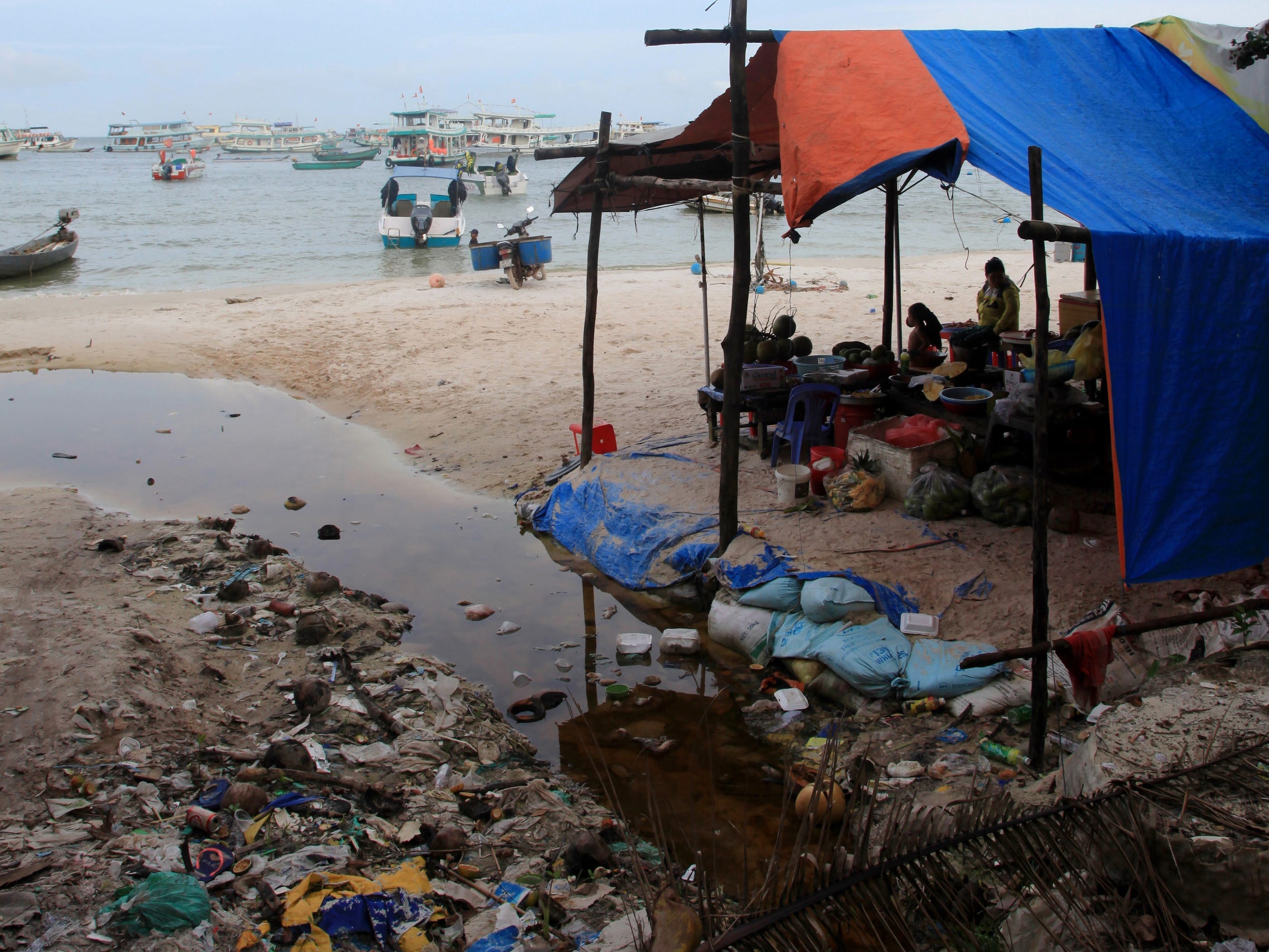 I'm afraid that Phu Quoc can't be as natural with fresh air, beautiful beach and forest as it used to be," a Phu Quoc resident told Insider.

The soul of the place

The question of why and for whom Phu Quoc was developed in the first place runs deep. Like, down to its master plan deep.

"There is a lack of coordination on the urbanization in Phu Quoc," said Redi of Diethelm Travel Vietnam. "It seems there is no proper master plan on how the island will look in the future and when massive construction will stop."

On the one hand, it looks like a clear play for mass tourism. "The government has done a good job at creating a scenario for mass market tourism, offering developers tax incentives, visa-free incentives, favorable land use fees and such," said Michael Piro, chief operating officer of Indochina Capital.

Yet, mass market tourism was never really the plan, according to a master plan designed by architecture firm Wimberly Allison Tong & Goo (WATG) in partnership with the Vietnamese Institute of Urban and Rural Planning. The 2030 masterplan, which was approved in May 2010, established a broad vision and design guidelines for all future development on the island.

Instead, the plan was to design "a world-class, eco-tourism destination" that would match the island's UNESCO Global Biosphere Reserve status, the master plan shows. The WATG website touts "careful consideration" of Phu Quoc's ecosystems and "balanced tourism growth." 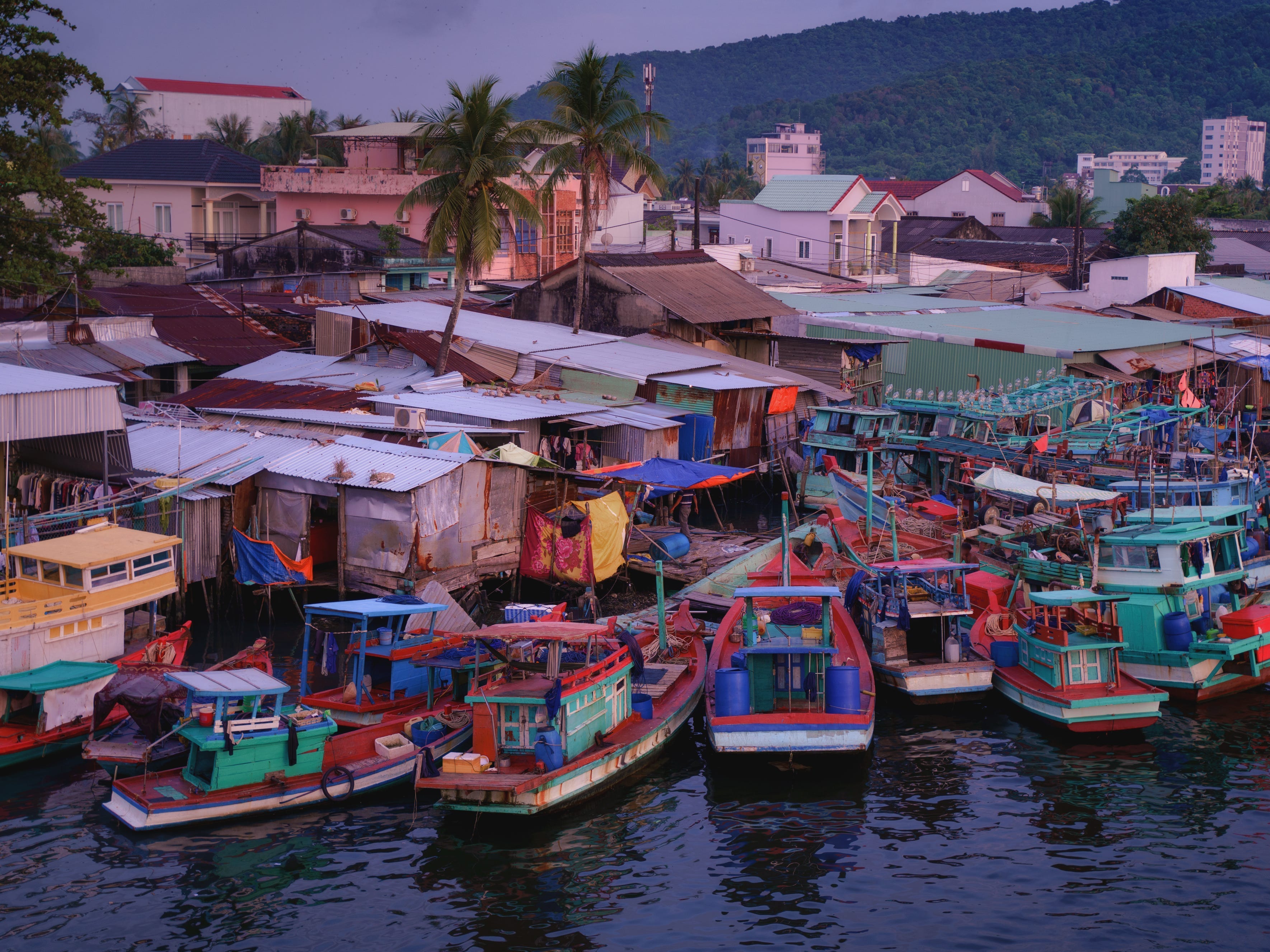 "Locals are the soul of a place. Without local culture and nature, Phu Quoc seems to be the same with many other commercial destinations."

There's also the matter of how locals have been involved – if at all.

A May 2019 study by two local university lecturers, Vu Minh Hieu and Vu Minh Go, shows that over 96% of locals surveyed said they had not been asked for their thoughts on tourism development plans by any local authorities. Close to 75% said they have no idea what the term "sustainable tourism development" means.

The experts and locals that Insider spoke to agreed that local involvement stands to hurt the island's development.

"If we see beaches and palm trees as the only value to bring in tourists and investments, we sideline locals and don't give them a chance to actively take part in reshaping their island," said Foerster, the business advisory manager at Dezan Shira.

As Phan, the secretary who lives and works on Phu Quoc, put it, "Locals are the soul of a place. Without local culture and nature, Phu Quoc seems to be the same with many other commercial destinations."

Editor's note: If you're an APAC-based freelancer who wants to write stories like this one about hospitality and tourism, email me your pitches at lbatarags@insider.com.