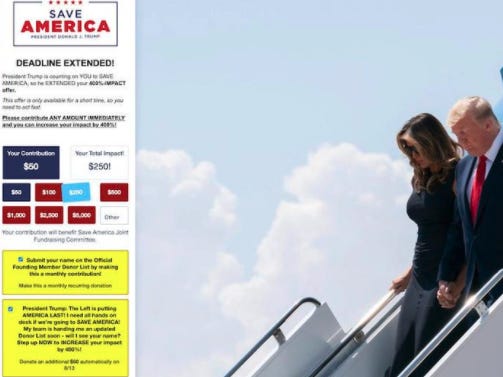 A fundraising email from Save America, sent on Tuesday, included a fundraiser with pre-checked boxes.

Save America JFC, via Forbes

Trump and the GOP have refunded millions of dollars to donors in 2021, The New York Times reported.
The refunds are the result of a fundraising strategy that uses pre-checked boxes to get recurring donations.
Save America, a Trump PAC, is still using the recurring donations tactic, Forbes reported.
See more stories on Insider's business page.

Former President Donald Trump's aggressive fundraising tactics used in last year's presidential election have led to millions of dollars in refunds to donors into 2021, according to The New York Times.

Trump and the Republicans returned $12.8 million to donors in the first half of this year, around 20% of the total the former president and his committees raised online in 2021, the paper reported.

The continuing avalanche of refunds is a sign, The New York Times said, that the Trump campaign's strategy of opting donors into automatic repeating donations by pre-checking boxes has steered huge numbers of supporters into unwitting contributions.

But despite investigations and disapproval from the Federal Election Commission, Forbes reported that a Trump political action committee is still using pre-checked recurring donation boxes in their fundraising efforts.

The Trump campaign deployed a strategy of extracting extra money from donors by automatically prechecking a box to take out a withdrawal every week, according to an investigation by The New York Times.

The investigation found that another automatically checked box that doubled contributions, known as a "money bomb," meant some donors gave much more than they had anticipated.

Disclaimers, the paper said, were often buried beneath several lines of bold text.

After introducing these boxes, the demands for refunds soared and reports of fraud to credit card companies rocketed, the Times reported. As a consequence, the Trump operation began to return money to donors.

The Trump campaign had to refund 10.7% of its online contributions in 2020, Forbes reported.

The tactic of automatically prechecking boxes proved beneficial to the Trump campaign, the paper noted. It led to an "interest-free loan" from his supporters and a spike in revenue in the lead-up to the election, the Times said.

But as Peter Loge, the director of the Project on Ethics in Political Communication at George Washington University, told the New York Times, it's deeply controversial. "If you have to return that much money, you are doing something either very wrong or very unethical," he said.

The Federal Election Committee appears to agree. In May, it voted unanimously to recommend that Congress ban campaigns from the repeated donations tactic.

In the Senate, Sens. Amy Klobuchar and Dick Durbin introduced legislation in May to ban campaigns from using prechecked recurring donation boxes.

The practice is also being investigated by state attorneys general in New York, Connecticut, Minnesota, and Maryland, Forbes reported.

According to Forbes, the Trump operation is undeterred by the backlash.

While some major Democratic fundraising organizations, including ActBlue, have said they are phasing out the practice, at least one pro-Trump political action committee is still utilizing it.

On Tuesday, Save America emailed supporters a link that included a link to a fundraising page with a pre-checked option to make donations reoccur for four months, Forbes reported.

A spokesperson for Save America did not immediately respond to Insider's request for comment.

More than $135 million was refunded to donors by Trump, the Republican National Committee, and their shared accounts in the 2020 cycle through to June 2021, according to new Federal Election Committee records seen by the Times.