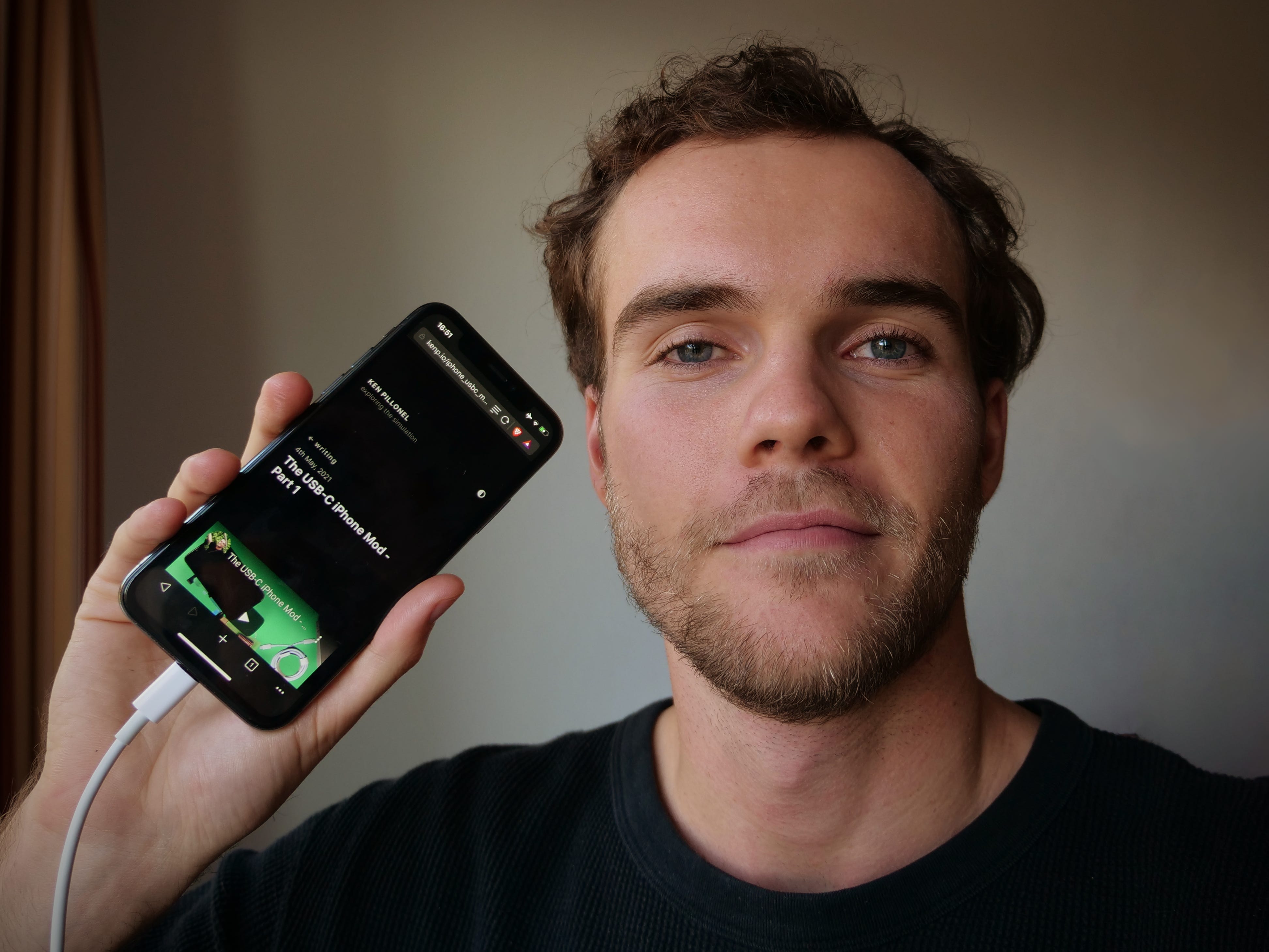 Pillonel poses with his hacked iPhone.

An engineering student tinkered for months before completing an iPhone with a functioning USB-C port.
He said the iPhone works, but the user would be prohibited from actually using it.
The phone is up for auction on eBay, where the top bid has skyrocketed in recent days.

Ken Pillonel, an engineering student, became the first known person in the world to create an iPhone with a functioning USB-C port after spending months modding a secondhand iPhone X.

"After waiting for years for Apple to make a USB-C iPhone, I decided that I'd had enough. I'll just make one myself," he said in a Youtube video with over 170,000 views documenting the design process of the phone.

The final product is now up for auction on eBay, where the current bid sits at $85,550. On Wednesday, the price for the modified phone lingered at just $5,000, and with seven days left on the auction, the price could skyrocket even more.

"I'm quite surprised by the reaction," Pillonel told Insider. "I believe the reason it's doing so well right now is that there hasn't really been a new collectible related to Apple put up for sale in recent times. So people who haven't had the chance to own an object like that are very interested in it. They view it as an investment."

He set minimum requirements for the phone, including that it must be able to charge and data transfer and that the rest of the phone must be functional.

Though Pillonel said his design is a working iPhone, whoever wins the phone at auction is prohibited from actually using the phone, since the device is meant as a proof of concept, according to the eBay listing.

In the Youtube video, Pillonel said he bought the cheapest iPhone he could find – an iPhone X – but couldn't find any advice online for the project he wanted to attempt, except for people warning others not to try it.

The Youtube video shows off the long journey to the finished product, where challenges included having to reverse engineer a fake Apple Lightning connector and getting a custom circuit board.

"It's going to be harder than I thought," he said, only a few minutes into the video.

Pillonel said his interest in USB-C ports started a few years ago, noting that the EU has proposed that all electronics should come with the USB-C charging port to cut down on e-waste.

"I believe the iPhone is one of the most-used consumer electronics device in the world that hasn't made the switch yet. Quite a few people are frustrated about that, including me," Pillonel said. "Being an engineer, I'm always eager to learn new skills, and in this project I saw a lot of opportunity to do that. So for those reasons combined, I thought: 'Maybe I should be the one to do it!'"

Though he posted a Github repository with the details needed to customize the phone, this isn't a mod for the faint of heart. Pillonel is a master's student in robotics at the Swiss Federal Institute of Technology, who said he likes to tinker with 3D printing and works as an engineering consultant in his spare time.

"If things go well it means that I will be able to continue doing similar projects, and that is what I'm most excited about," he said.