SpaceX founder Elon Musk has called Starlink user terminals, which are designed to connect to the internet via a fleet of orbiting satellites, "UFOs on a stick."

SpaceX has rocketed 835 Starlink satellites into orbit to build a high-speed internet service.
Elon Musk, the company’s founder, says Starlink will soon open for a public beta, followed by paid US service shortly thereafter.
Early results are promising, with high speeds and low latencies. SpaceX even gave Starlink terminals to Washington State emergency responders and the Hoh Tribe, which both lauded the technology.
Starlink also got FCC approval to bid for $20.4 billion in subsidies, is close to being licensed in Canada and Australia, and has won multiple US military contracts.
But Starlink faces significant challenges in terms of the network’s capacity, effects on astronomy, and creation of space debris.
Visit Business Insider’s homepage for more stories.

SpaceX is on a winning streak with its ambitious plan to envelop Earth with broadband internet service, called Starlink, and shows no signs of slowing down.

But its mission isn’t without controversy or opposition — including from astronomers and companies trying to launch rockets through an ever-crowded path to orbit.

The aerospace company, founded by Elon Musk in 2002, wants to launch nearly 12,000 Starlink satellites by mid-2027, though possibly up to 42,000. The goal is to nab $30 billion to $50 billion a year from a trillion-dollar global telecommunications industry, Musk has said.

To that end, SpaceX rocketed 60 more of its flat, desk-size satellites a few hundred miles above Earth on Sunday. The launch marked the project’s 13th operational mission, and SpaceX plans to fly Starlink-14 on Thursday, Starlink-15 in early November, and batches of dozens more roughly every two weeks thereafter.

At least 762 working Starlink satellites are in orbit right now. That represents more than one-quarter of all active spacecraft around the planet and nearly half of those in low-Earth orbit. While not enough to provide coverage around the world, Musk says it’s plenty to kick off a full public beta test in North America in the next few months.

At the current rate of launch, SpaceX could get enough satellites in orbit for “significant” global service before 2020 is over.

A record-breaking flight schedule that’s building out an operational internet service is just one way SpaceX has hit a remarkable streak with Starlink over the past couple of months — though not without controversy.

SpaceX ‘just catapulted us into the 21st century’ 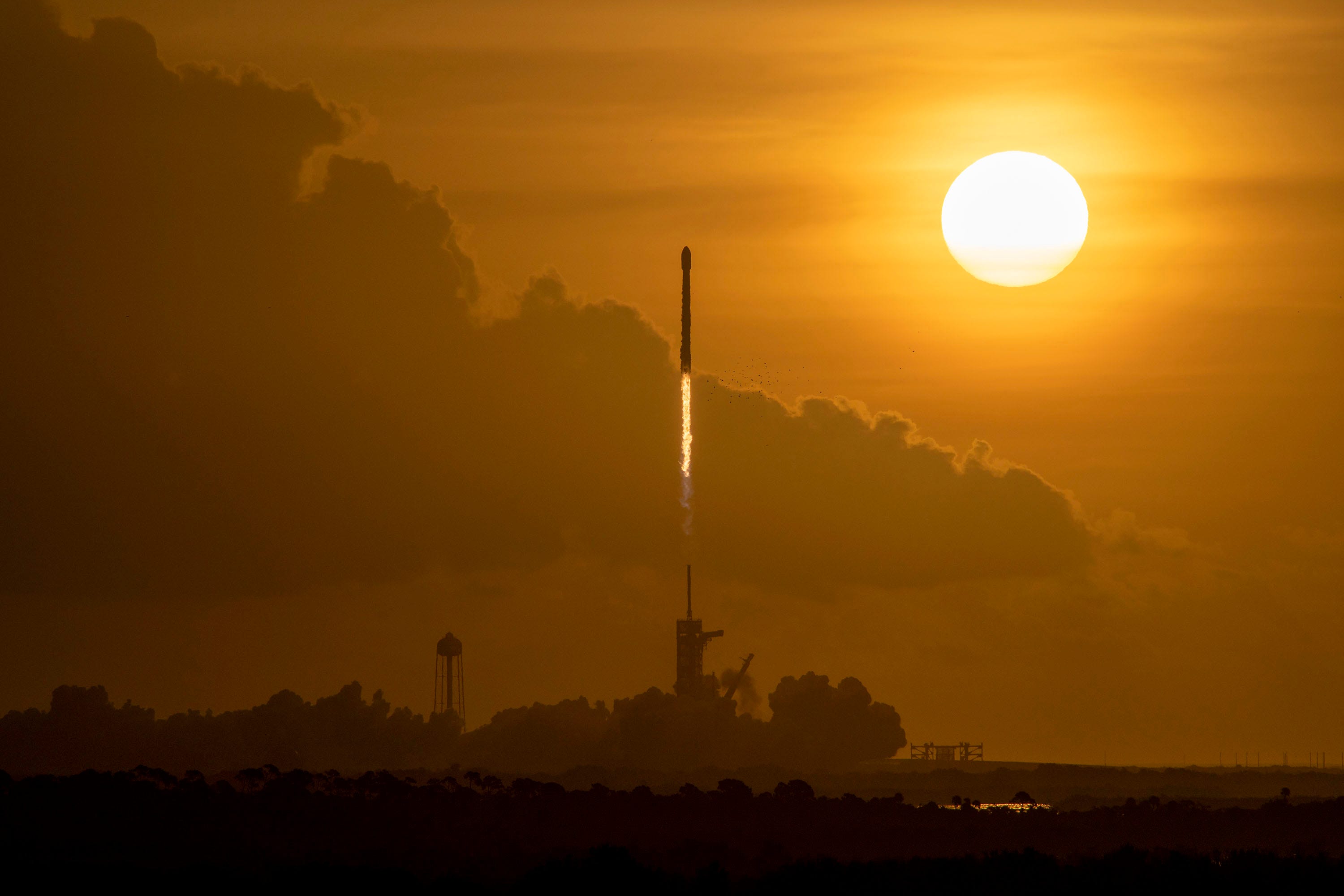 SpaceX's Starlink-12 mission lifts off during a sunrise over Cape Canaveral, Florida, aboard a Falcon 9 rocket on October 6, 2020.

Some of SpaceX’s biggest wins stemmed from a private beta test the company began this summer.

Testers, most of them remote residents of the US Northwest, were supposed to stay quiet, per nondisclosure agreements they had to sign. But some publicly tested their connections, allowing Reddit users to get ahold of the results and post them online.

The data revealed broadband-like internet performance not yet seen via a satellite system: Connections not only showed speedy download and upload rates, but also had a low ping — a measure of round-trip travel time for data, which is essential to fluid videoconferencing, voice calls, gaming, and other real-time applications.

The Federal Communications Commission, for its part, took notice of the new Starlink beta data. The regulatory agency initially doubted satellites could compete with fiberoptic and other ground-based broadband internet services in the agency’s Rural Digital Opportunity Fund — a $20.4-billion subsidy program to shore up internet service in under-connected US areas. But on October 13, commissioners named SpaceX a “qualified bidder,” which permits the company to compete in a reverse-auction process that starts October 29.

SpaceX also revealed in a recent FCC filing that it plans to increase its upload and download speeds 250% with a software update to its satellites and “UFO on a stick” user terminals. And, as if to spike the football, SpaceX also gave permission to first responders and the Hoh Tribe of Washington state to speak up about their experiences using Starlink. Both groups raved about the service.

“The last eight years, I feel like we have been paddling up river with a spoon and almost getting nowhere with getting internet to the reservation,” Melvinjohn Ashue, vice chair for the Hoh Tribe, said in a video posted by Washington State’s Department of Commerce. “It seemed like out of nowhere, SpaceX just came up and just catapulted us into the 21st century. Our youth are able to do education online [and] participate in videos. Telehealth is no longer going to be an issue.” 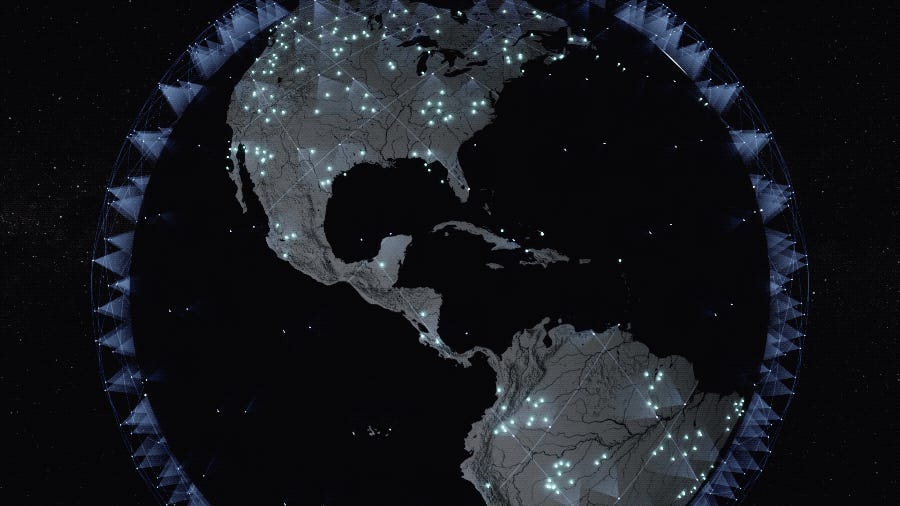 An animation of SpaceX's Starlink satellite constellation providing internet coverage to the Americas.

Another element of Starlink’s streak has been sudden progress toward international licensing, which is essential to the project’s business case. Without an ability to beam down data to servers in foreign countries, the project would have to route its internet traffic through undersea fiberoptic cables instead of via lasers through the vacuum of space (which SpaceX apparently recently tested with great success).

Wireless signals are tightly controlled by government agencies to avoid interference problems, though, so Starlink can only be used in countries that explicitly authorize it. Gaining that permission has seemed sluggish, but SpaceX made significant progress in both Australia and Canada over the past few weeks. Although more steps remain before users can connect to Starlink in either country, both countries have awarded SpaceX basic operation licenses.

SpaceX has also garnered newfound favor within the Department of Defense. After winning a $28 million contract with the US Air Force in 2018, for a project to test encrypted Starlink internet on military airplanes, SpaceX picked up a new $149 million contract with the Pentagon in early October to build Starlink-like satellites able to detect the launch of ballistic, cruise, and hypersonic missiles.

And on Tuesday, Microsoft said SpaceX’s Starlink will connect its new modular data center business and help expand the company’s Azure cloud-computing business to remote areas, such as military bases and disaster areas. The scheme would compete with the plans of Amazon tycoon Jeff Bezos, who wants to link AWS cloud-computing services using a forthcoming Kuiper satellite-internet constellation.

But Starlink is not without major challenges or controversy 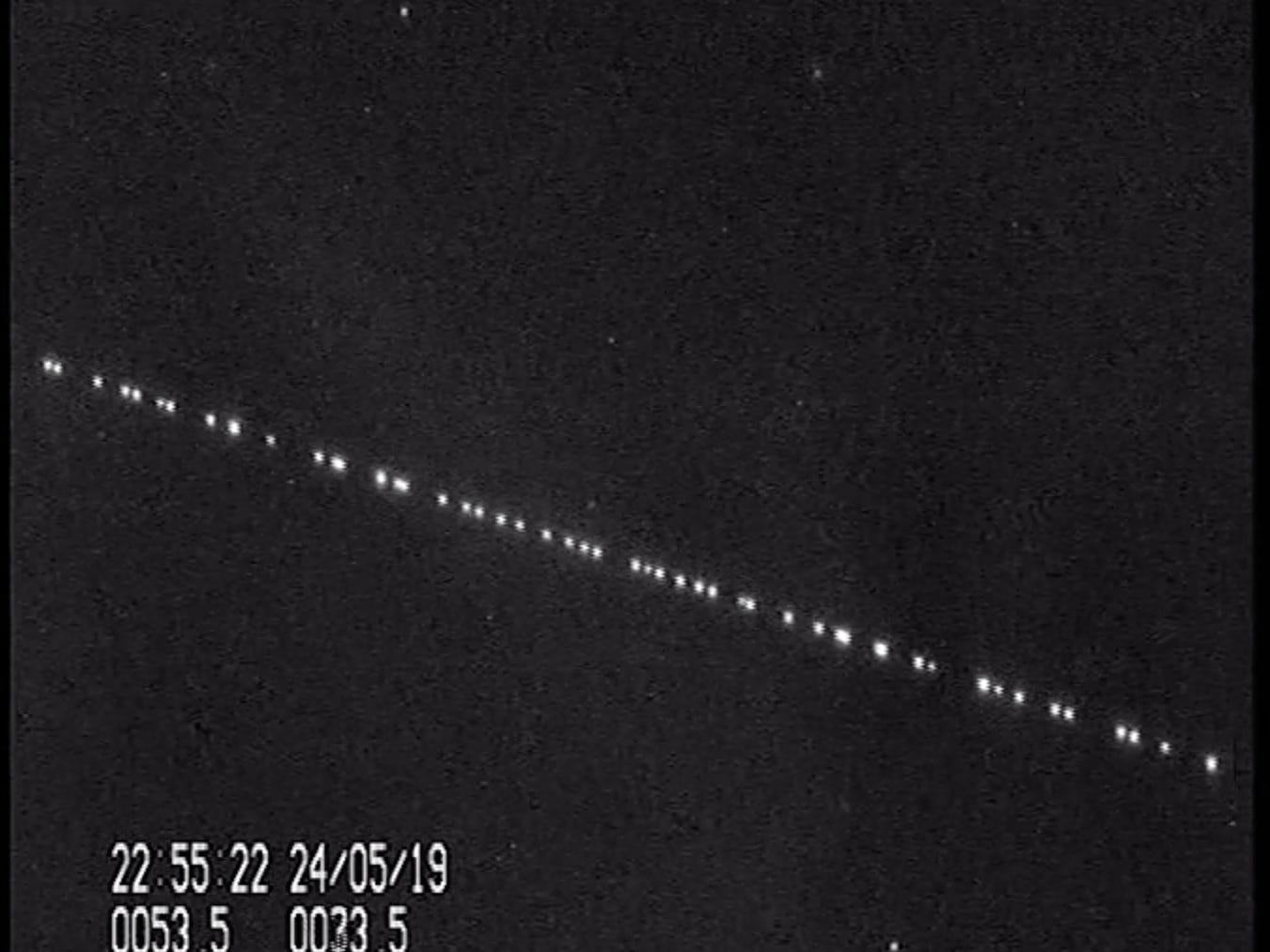 An astronomer in the Netherlands captured the Starlink train zooming across the sky shortly after its launch.

While thousands of Starlink satellites orbiting Earth might seem like a great way to beam internet to anyone who wants it, analysts at the research firm Cowen suggest there are hard limitations ahead.

Cowen analysts said in a September 23 industry update, which focused on Starlink, that SpaceX’s full 12,000-satellite network could support less than half a million users simultaneously using all of a 100 megabit-per-second connection speed.

That’s not realistic, Cowen said, since all connections are never always in use. Yet even accounting for the industry-standard practice of “oversubscribing” an internet network’s full capabilities, SpaceX may see a maximum of 1.5 million users in the US, LightReading reported — and that assumes people will consume bandwidth at current levels (which they won’t, given the rising use of  increasingly high-definition streaming video).

SpaceX might alleviate the problem by adding 30,000 additional satellites and upgrading its spacecraft every five years or so, as Musk said the company would do. But there is a limit to the wireless signals Starlink use.

“There’s only so much data you can push through the license before you run out of the capacity to move information,” Ernesto Falcon, a senior legislative counsel at the Electronic Frontier Foundation who focuses on broadband access and competition policies, told Business Insider in September. “You can’t rewrite rewrite the laws of physics.”

It also remains to be seen how affordable SpaceX can make user terminals that connect users to Starlink satellites. Musk has said SpaceX is targeting $200 per terminal, though analysts say the key component — a phased-array antenna — can cost 10 times as much. 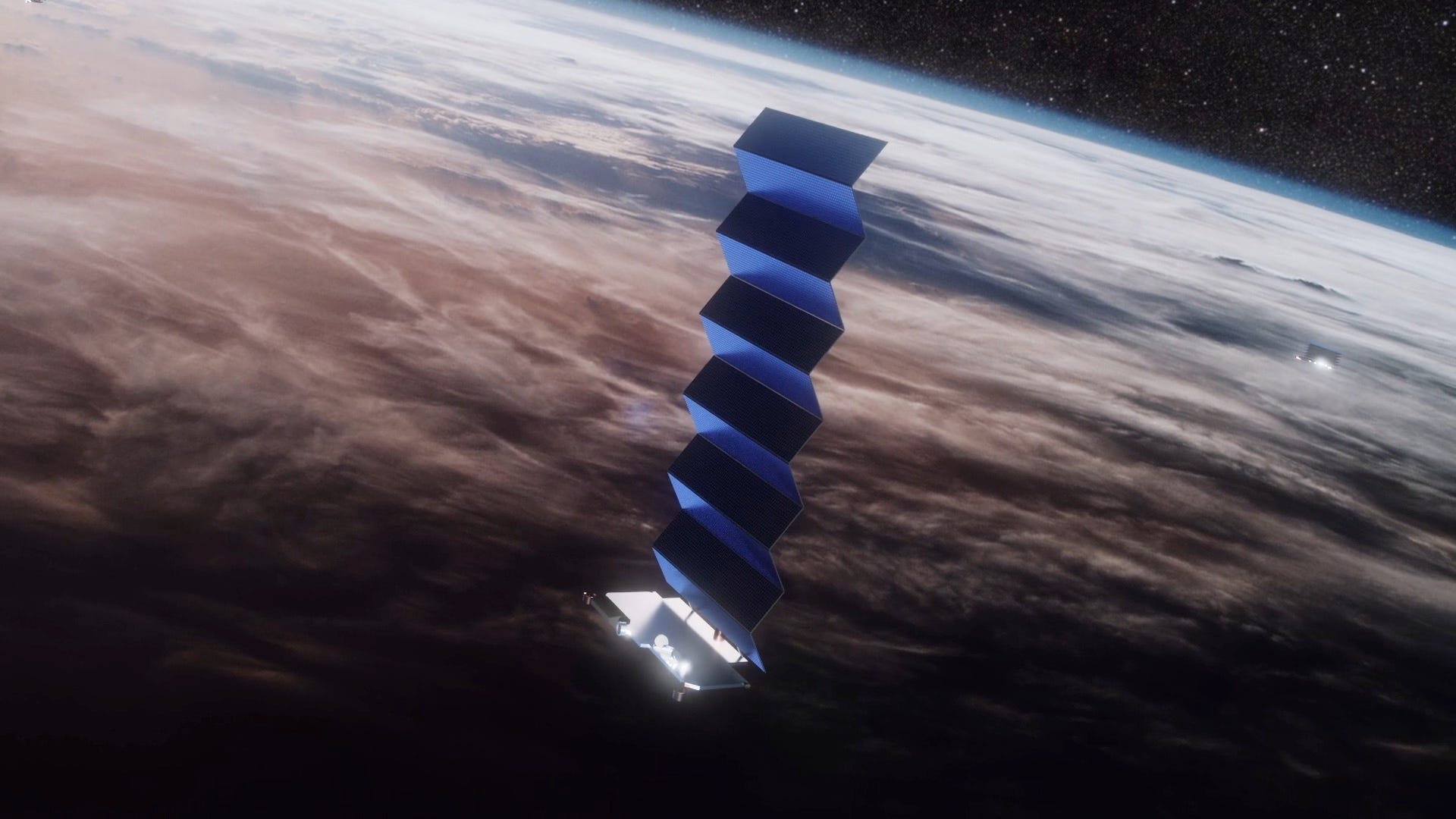 An illustration of SpaceX's Starlink satellite internet constellation in orbit around Earth.

There’s also the issue of crowding in orbit by “megaconstellations” like Starlink, Kuiper, OneWeb, and others. Peter Beck, the CEO of the rocket-launch startup Rocket Lab, said it’s increasingly difficult to find a clear path to orbit with the deployment of Starlink.

“This has a massive impact on the launch side,” he told CNN Business earlier this month. “[Rockets] have to try and weave their way up in between these [satellite] constellations.”

Astronomers are none too pleased by Starlink, either, even after SpaceX’s efforts to darken them and prevent shiny parts from reflecting sunlight toward the ground. Such glare has ruined sensitive telescope observations, including some designed to look for asteroids that may threaten Earth.

A heated debate has also emerged about whether or not huge fleets of satellites will trigger a crisis in orbit that could last centuries: the creation of orbital debris that can occur when satellites crash into each other or pieces of existing debris.

Starlink spacecraft can maneuver in space with a krypton-ion drive, so long as that engine and communication systems to control it work. But around 3% of the 835 Starlink satellites already launched to orbit have failed or stopped maneuvering, according to astronomer Jonathan McDowell.

While not out of line for the industry, and not a big problem now, he told Business Insider’s Morgan McFall-Johnsen that it could become one with the deployment of thousands of spacecraft.

“I would say their failure rate is not egregious,” McDowell said. “It’s not worse than anybody else’s failure rates. The concern is that even a normal failure rate in such a huge constellation is going to end up with a lot of bad space junk.”