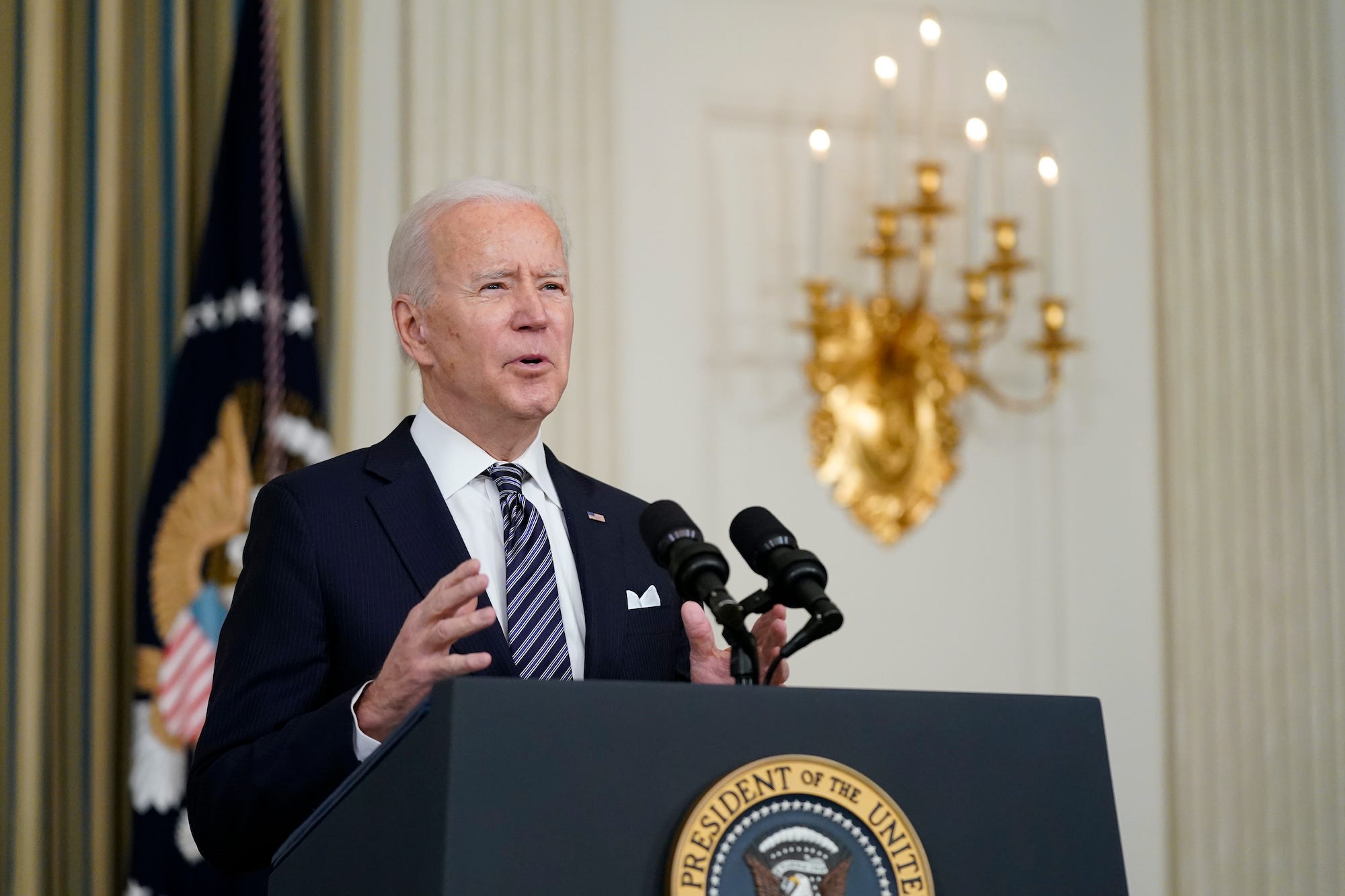 President Joe Biden speaks about the COVID-19 relief package in the State Dining Room of the White House, Monday, March 15, 2021, in Washington

Almost 3 million people have collectively signed online petitions calling for another round of US stimulus payments.

"We need immediate checks and recurring payments so that we can keep our heads above water," Stephanie Bonin, one of the larger petitions' creators told Newsweek.

Bonin's petition is called "$2000/month to every American #moneyforthepeople #covid19" and is directed at the House and Senate. Some Democrats in Congress have urged President Joe Biden's administration to push for a fourth round of checks.

Five smaller petitions on change.org for monthly checks have also gained traction over the past month, according to Newsweek.

White House Press Secretary Jen Psaki on June 3 said Biden is most focused on creating jobs, but he's "happy to hear" other ideas that would stimulate the economy.

Psaki said in a press briefing: "But he's also proposed what he thinks is going to be the most effective for the short term, for putting people back to work, to getting through this pivotal period of time, and also to making us more competitive over the long term."

The economy has shown signs of rebounding, with new jobless claims at a pandemic-era low and payroll growth exceeding expectations in June. But the unemployment rate as of Friday remained at 5.9%, more than 2 percentage points higher than pre-pandemic rate in February 2020, according to the Bureau of Labor Statistics.

Bonin, a restaurant owner in Denver, called in her petition for immediate $2,000 payments for adults and a $1,000 payment for children, along with regular payments for the duration of the pandemic.

"For our team and other Americans who can claim unemployment, even the maximum payments will not be enough for most people to continue paying their bills – and avoid slipping into poverty," she wrote.

The pandemic increased food insufficiency for households across the US, according to a July 1 blog co-authored by Cecilia Rouse, chair of the White House's Council of Economic Advisers, and Brandon Restrepo, an economist in the Diet, Safety, and Health Economics Branch of the Food Economics Division.

Stimulus payments have helped, according to the White House.

"After the pandemic struck and hunger went up dramatically, there were temporary reductions in food insecurity rates following the passage of the CARES Act in March 2020 – when the first round of stimulus checks were released to many Americans," the economists wrote.

The pattern repeated itself with each of the subsequent rounds of stimulus, according to the blog. Food insecurity rates rose, then dropped as the stimulus payments were sent out.

By mid-April 2021, the total rate of food insufficiency in the US dropped to 8%, the lowest rate since the pandemic began, according to Rouse and Restrepo. For families with children, the rate fell to 11% in mid-April, down from 18% in mid-December 2020.

"With Federal aid payments now decreasing, however, it is not surprising that food insecurity is again on the rise," Rouse and Restrepo wrote.