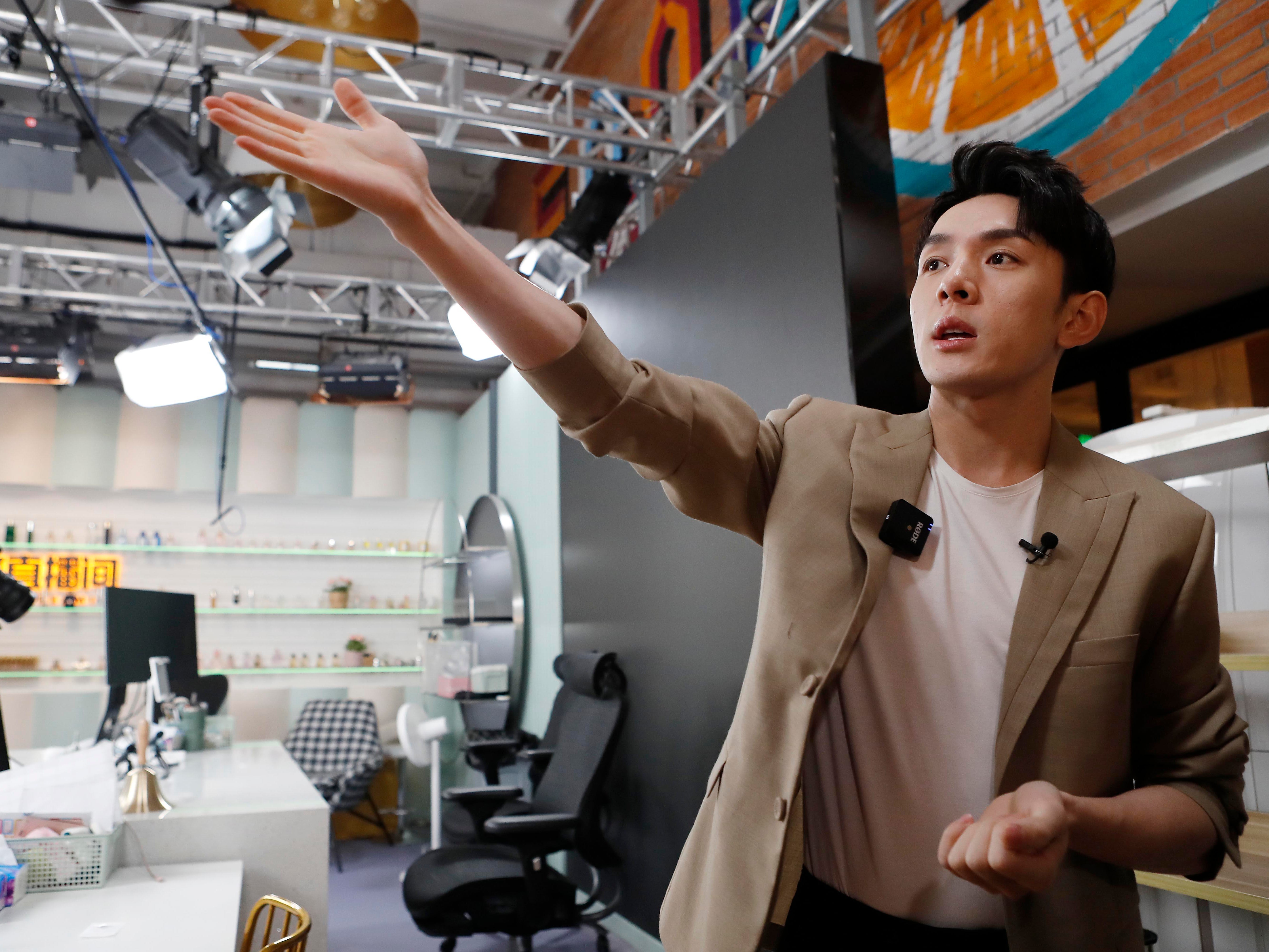 At 28, Austin Li Jiaqi is known as the "Lipstick King" in China.
Li gained his moniker when he tried on 380 lipsticks during a seven-hour live-stream.
His sassy demeanor and snazzy catchphrase "OMG! Sisters, buy this!" have netted him a cult following.
Visit Insider's homepage for more stories.

At first glance, Austin Li Jiaqi looks like the boy-next-door: he's always clean-shaven and typically dressed in earth-toned, well-pressed button-down shirts. But when his stream on Chinese e-commerce platform Taobao goes live, a different side of him comes out to play.

"We're starting now!" he claps and proclaims loudly, as millions of followers and ardent fans pour in to see him try lipsticks and other beauty products live.

China's $38.6 billion beauty industry is the second largest in the world behind the US (which rakes in an estimated $56 billion annually) and is on trend to be the biggest market by 2023, according to the Cheung Kong Graduate School of Business.

In the last several years, Li's built a following of more than 7 million on the Chinese social media platform Weibo and more than 35 million on TikTok. His recommendations can be the difference between a product selling out or sitting on the shelves collecting dust.

The live-streaming sales powerhouse has come a long way from his humble beginnings as a L'Oreal shop assistant in Nanchang, a small city in southern China. He now holds joint live-streams with Chinese singers and actors and has become a society fixture at political conferences, beauty conventions, and gala events for luxury brands and magazines.

Helped along by a full staff of assistants and live-streaming technicians, he rattles off his signature catchphrase, "OMG! Sisters, buy this!" and hawks products on his marathon live-streams from a snazzy studio in Shanghai.

What sets Li apart from other streamers appears to be his cutting – and often snarky – reviews of every product he dislikes, be it Calvin Klein or Chanel. His friendly, peppy tone of voice, combined with how he seems unafraid of offending luxury brands and major retailers with his scathing takes, puts him in stark contrast to other Chinese beauty streamers, who avoid treading on thin ice where key industry players are concerned.

Weibo users are especially intrigued by Li's often vivid descriptions of his products. Coral blush isn't "peach": it's the ripe fruit of summer, tender to the touch, a shade that'll make boys stop in their tracks. That necklace isn't just "shiny – it reminds him of the stars, the shimmering of a million galaxies.

And then there's the lipstick.

From 2017 to 2018, Li cemented his position as the country's "口红一哥" (or "lipstick king"): first, when he tried on 380 lipsticks in a seven-hour marathon stream, and then when he sold 15,000 lipsticks in 5 minutes, beating Alibaba founder Jack Ma in a one-on-one selling competition.

The South China Morning Post also reported that in 2019, Li set a Guinness record for "the most lipstick applications to models in 30 seconds," putting lipstick on four different models in just 30 seconds.

Most recently, Li was named one of the "Time100 Next 2021", a list of emerging leaders around the world who are "shaping the future."

Despite social media chatter about a rumored romance with his long-time assistant, Li maintains that he has "no time to date."

Li notoriously keeps to himself, but in 2020, the Chinese press reported that he purchased a swanky three-story penthouse in private apartment complex Yunjin Oriental, which is located in the middle of a glitzy riverside district just off the Shanghai Bund.

Chinese media estimates that Li earns anywhere between $10 to $20 million from live-streaming every month, and Time has projected that Li will be worth $15 billion by 2023 off of his earnings from China's live-streaming e-commerce industry alone. 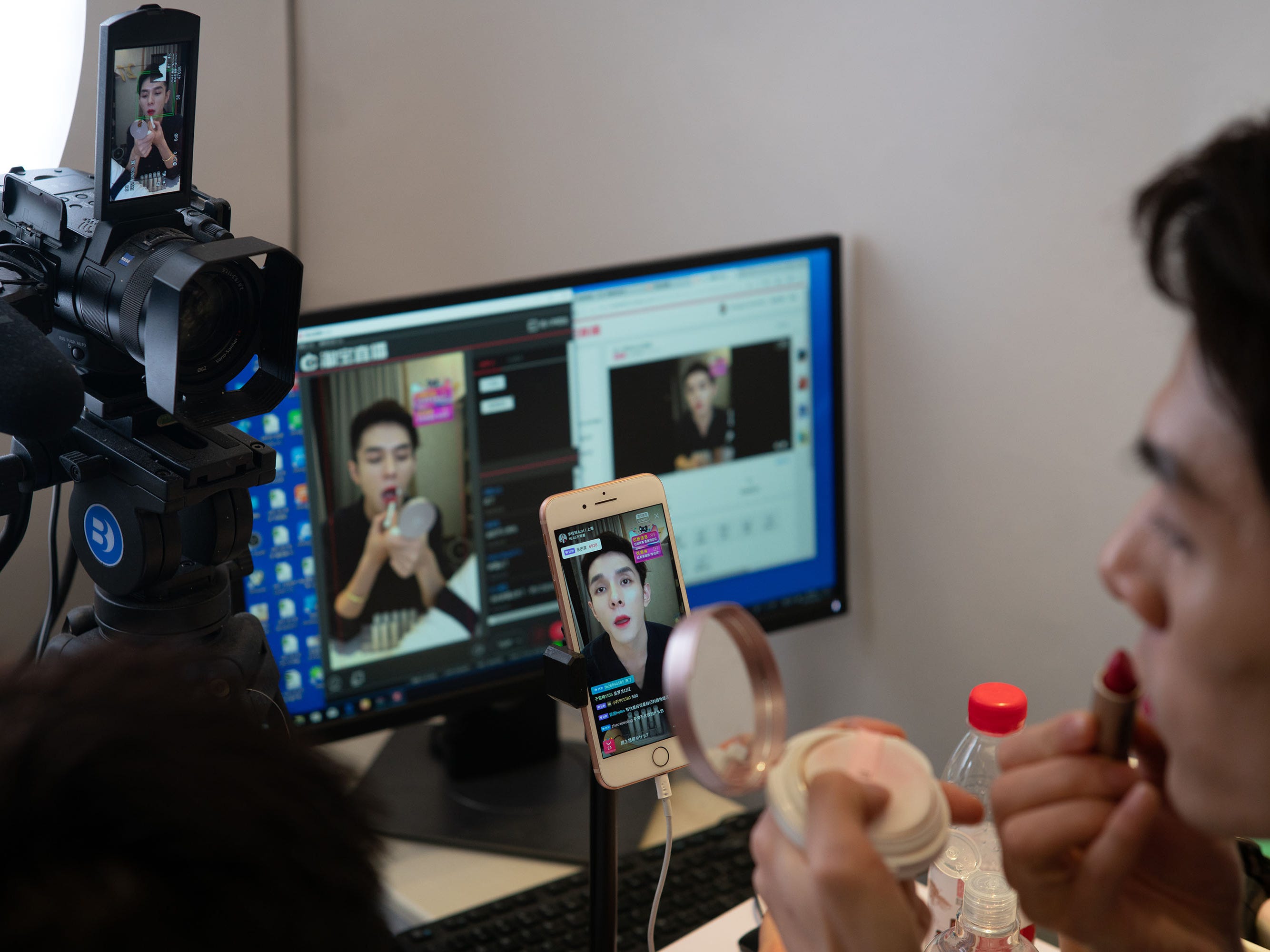 Li's business model is simple: brands allot a certain amount of stock for Li to sell on his stream, and he takes a cut for his services. But the sheer volume of the items that Lee sells, coupled with the line-up of brands that want to foster a working relationship with him, has made him a force to be reckoned with in China's e-commerce market.

Products are sold in real-time during marathon live-streams that can last from anywhere between six and eight hours. These days, Li sells everything from skincare products to household appliances and snacks. Customers are motivated to lock in impulse buys as Li counts down from 10, making gleeful announcements on his stream when thousands of products sell out in a matter of seconds.

But just as it might be the pinnacle of success for a brand to get a shout-out from Li, some might prefer he leave them alone.

Whether brands like it or not, Li's endorsement can have a huge impact on sales.

In 2020, it was reported by Chinese media Jing Daily that a five-minute segment on Li's stream caused the sales of a widely-anticipated 24-shade line of lipsticks from Hermès to tank in China.

When reviewing the Rouge Hermès line on his Taobao stream, he told his 12 million viewers that the shades looked "cheap."

"There's no soul in these colors," Li said, sighing. "It's unflattering, just like the shades your old mother would use."

A clip of his Hermés live-stream went viral on Weibo, as the hashtag #李佳琦的表情 (translated: The Look On Li Jiaqi's Face) trended, praising him for his honest – albeit cutting – reviews.

His bluntness makes him a standout in a crowded e-commerce market and wins him a devoted cache of supporters.

"Never change, Jiaqi," a fan wrote on social media after the Hermés stream. "This is why we know we can rely on you!"