The "antiwork" movement is rapidly growing, as people – especially Gen Zers – embrace a work-free lifestyle.
Both an online and in-person movement, it's about workers pushing back against exploitation and rethinking possibilities.
Insider spoke to three antiworkers about why they've left working behind, and what it means about the American Dream.

Larry had a vision after he graduated college: He and his then-wife were going to be a "power couple." They were going to actualize their American dream. They'd buy a house in the suburbs and go on vacation every two years.

That vision of the perfect life eventually shattered. His then-wife saw through the illusion of work, he said, and quit to take care of their children and her elderly father. It took him a little longer to get there.

"It's something that someone else planted in our minds," Larry, whose last name is known to Insider, said.

"I really don't have any expenses. I don't need any money. I can survive without money," he said.

Larry is a part of something that's growing: People who are opting out of working.

Some of them call it "antiwork." It's a trend bolstered by younger workers, as Gen Zers make their mark on the labor market. In America, it looks similar to similar youth-led movements against work in other countries, especially China, where young people are "lying flat" by decentering a drive to constantly be more productive and competitive at work, and instead find happiness in their own lives and relaxation.

"I don't really want to work anymore," Larry said. He added: "I don't want to have any meetings, no deadlines, no goals, no quarter, no seminar. I don't want none of that stuff no more."

A rising disillusion with the state of work has spawned millions of Larrys over the last year. People have been quitting their jobs at record rates for six months in a row now – and many aren't going back. That's because, for some, work doesn't seem to be worth it anymore. Wages have been on the decline for decades while student debt rises. The number of people with low-wage jobs has grown since the Great Recession, as salaries that support a middle-class life have cratered.

Then came the pandemic: Billionaires added $2.1 trillion to their collective wealth as millions of Americans were unemployed. Inequality widened.

The stories of those in the antiwork movement provide some answers to why there's an ongoing labor shortage. Whether bosses realize it or not, workers are effectively striking for better conditions – and it might just work.

A million strong – and growing

The Reddit group "r/antiwork" has garnered a million followers since it first began in 2013; half of these joined just in October 2021 alone. That means that tens of thousands of people – if not more – visit the group daily. As expressed on the subreddit, antiwork is about embracing a work-free lifestyle, and finding community in pushing back against exploitative working conditions.

"A lot of people mistake antiwork for being lazy, and like nothing has to ever get done," one moderator of the subreddit, who goes by u/rockcellist, told Insider.

"But the truth of the matter about antiwork – and everything surrounding it – is that obviously things have to get done, but the current structure in which things get done and the way that capital flows as they get done is unfair and should be nonexistent."

Kade, a Gen Z worker in Kansas, is one of the people who turned to r/antiwork and posted after he quit his job as a service worker. He had been considering quitting for a while, but he was pushed over the edge after his boss posted a sign telling workers they couldn't use their phones during shifts – and, if they were caught with their phones, management could confiscate them.

"I never really see anybody not doing work and on their phone," Kade said. He added that he didn't think management should have the right to take his personal property.

Kade said he first started seeing posts from r/antiwork a few months ago, and that reading people's accounts of quitting – and learning about the ways they're rethinking work – factored into his own decision to quit. He's already had at least one interview for a new job, and has a little bit of savings built up to keep him afloat in the meantime.

"I think it felt like I could be like a bigger part of a movement," Kade said. "I didn't want to put up with this stuff."

It's also where Kaytlynn Nicholson, a fellow Gen Zer, went to post after she quit her job in food service to pursue woodworking full-time. 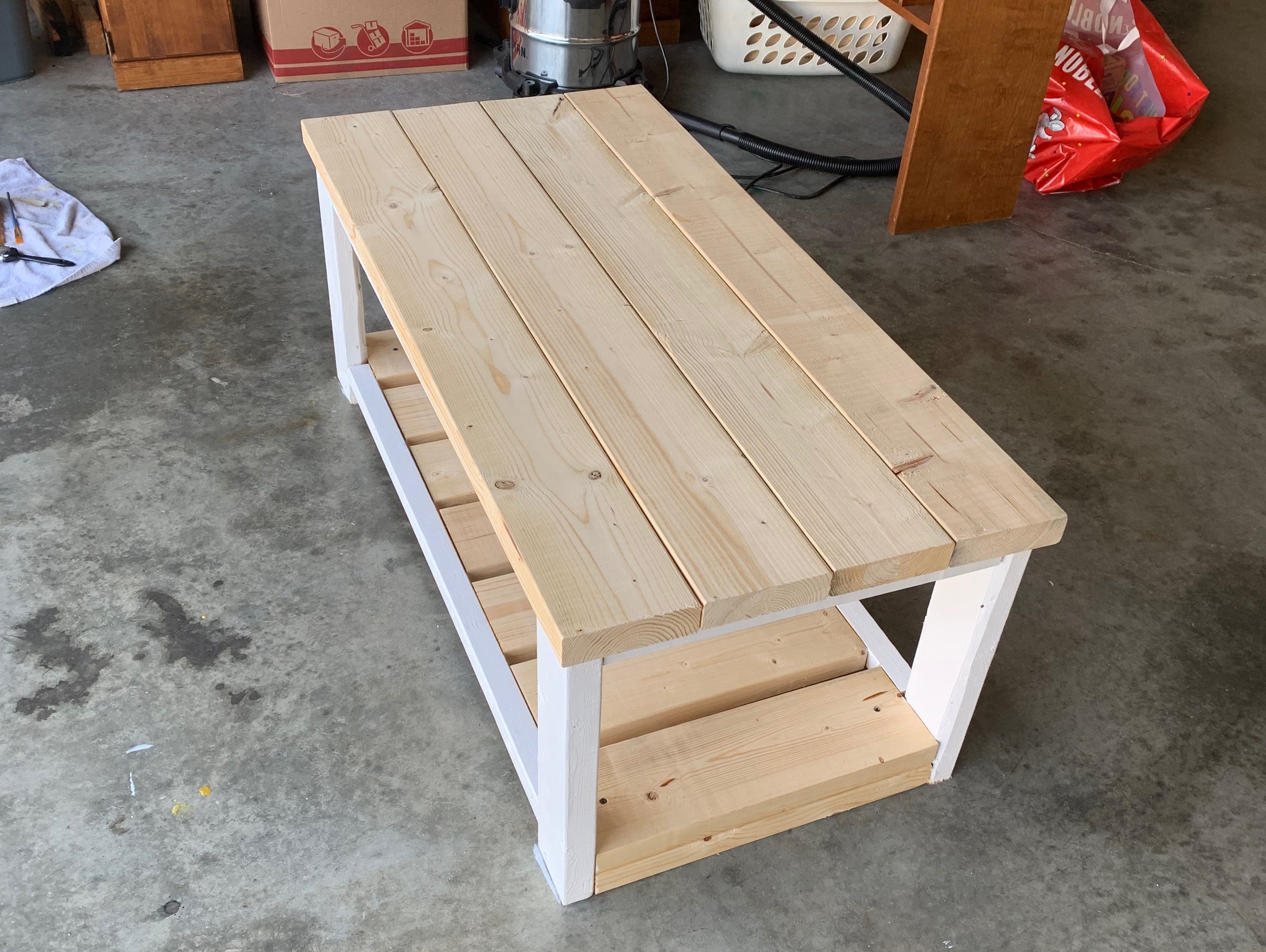 Some of Nicholson's woodworking.

The group helped her see that she's not alone – she had thought issues like understaffing and long hours were just at her workplace.

"I realized that that's happening everywhere – companies are saying, 'Hey, you know, there's a labor shortage, but they're not hiring people and they're just overworking their current employees,'" Nicholson said. "I think that it's good to know that – that you don't have to take that."

According to Nicholson, she told her boss she couldn't work on a certain day because she needed to bring her car in for repairs. Her boss said if she didn't show up, she'd be fired. She didn't show up.

Focusing on woodworking has been fulfilling, she said. "People used to actually build their own stuff and do a lot of stuff at home. I think that that stuff isn't really appreciated as much anymore as it should be."

'Employers just aren't going to have people to run their businesses'

Like many aspects of the economy, the rising sentiment against working in the conditions crafted over the past couple of decades has been jolted by the pandemic. Low-wage workers were labeled essential, but even their small hazard pay hikes ended after a few months.

Some employers seem shocked by shortages, and by workers turning the table and ghosting them.

Insider's Grace Dean reported that a BBQ restaurant in Florida shuttered after only being able to retain four employees.

"Damn you pandemic and the political machine for making [it] more appealing to not work than to be an active part of the workforce in our country," the owner wrote in a Facebook post, referring to the enhanced unemployment benefits that Congress approved during the crisis. Research has consistently shown that the extra $300 or $600 per week from unemployment insurance has had little impact on employment. 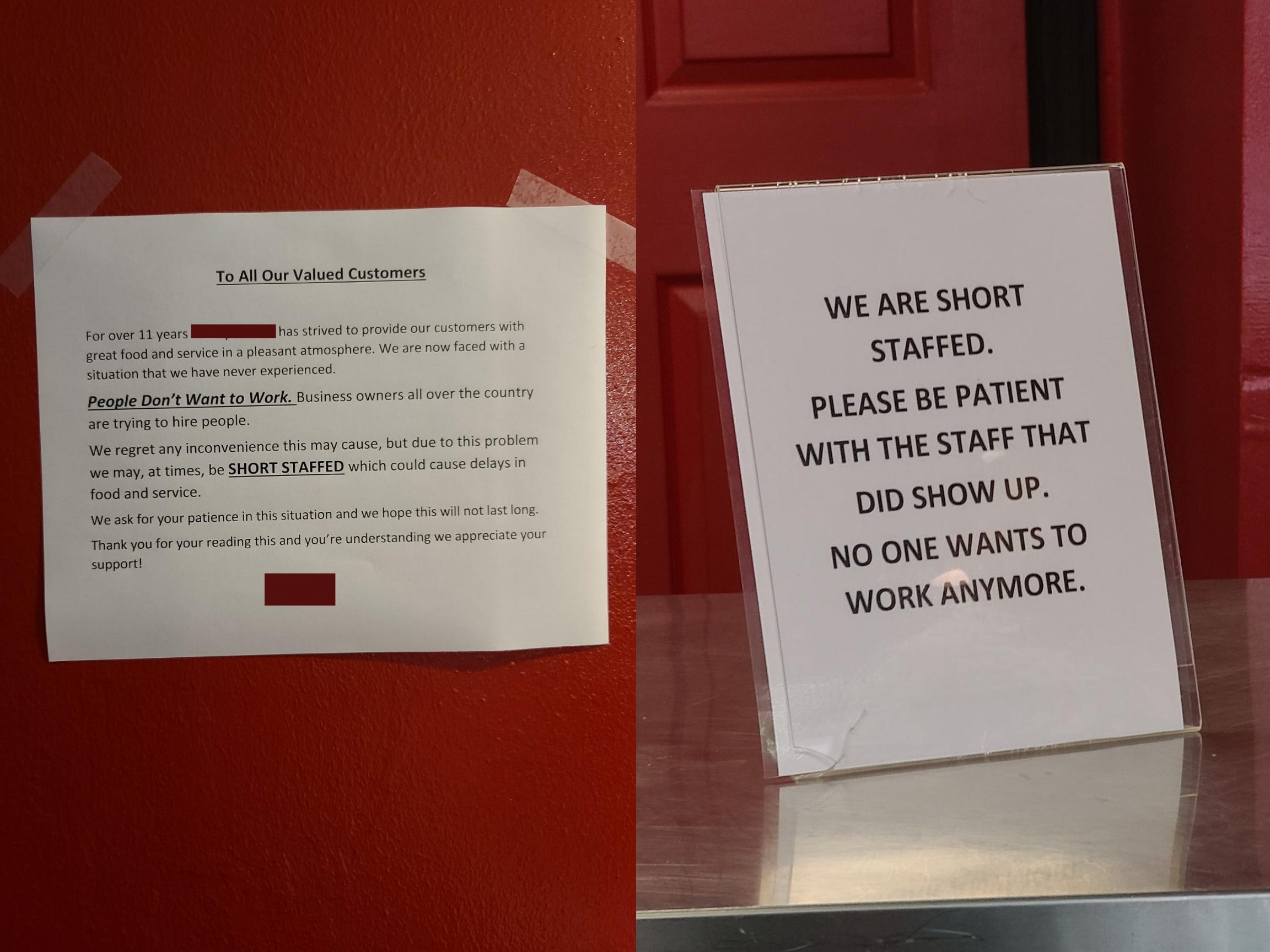 But the rise of antiwork doesn't come as a surprise to Steve Rowland, the host of Retail Warzone, a podcast chronicling retail workers' "horror stories."

"One of the things that really kind of pushed it that way was all the stupid signs that were getting hung up on the doors: ''Nobody wants to work, unemployment benefits, et cetera, et cetera," Rowland said. "​​I think that when that started happening, it forced people to kind of educate themselves on what's going on."

The newest generation reshaping the workforce may also play a pivotal role in the rise of demanding better conditions.

"I think that it has a lot to do with Gen Z," Kade said. "They just don't put up with employers' crap anymore."

Either way, workers say that employers should take heed. Rowland predicts that, come December, there could be a massive shift, as the pandemic, supply chain issues, and unruly customers come to a head.

"It's going to be about a workforce that is finally going to be like 'we've had enough,'" Rowland said.

And, Kade said, if people keep quitting at this rate, "employers just aren't going to have people to run their businesses and they're going to go bankrupt or have to shut down – or change their ways."

For now, though, Larry has found some liberation.

"When you go to this stage in your life where you're not working anymore, and you really don't care about some things, it's freedom. It really is freedom."