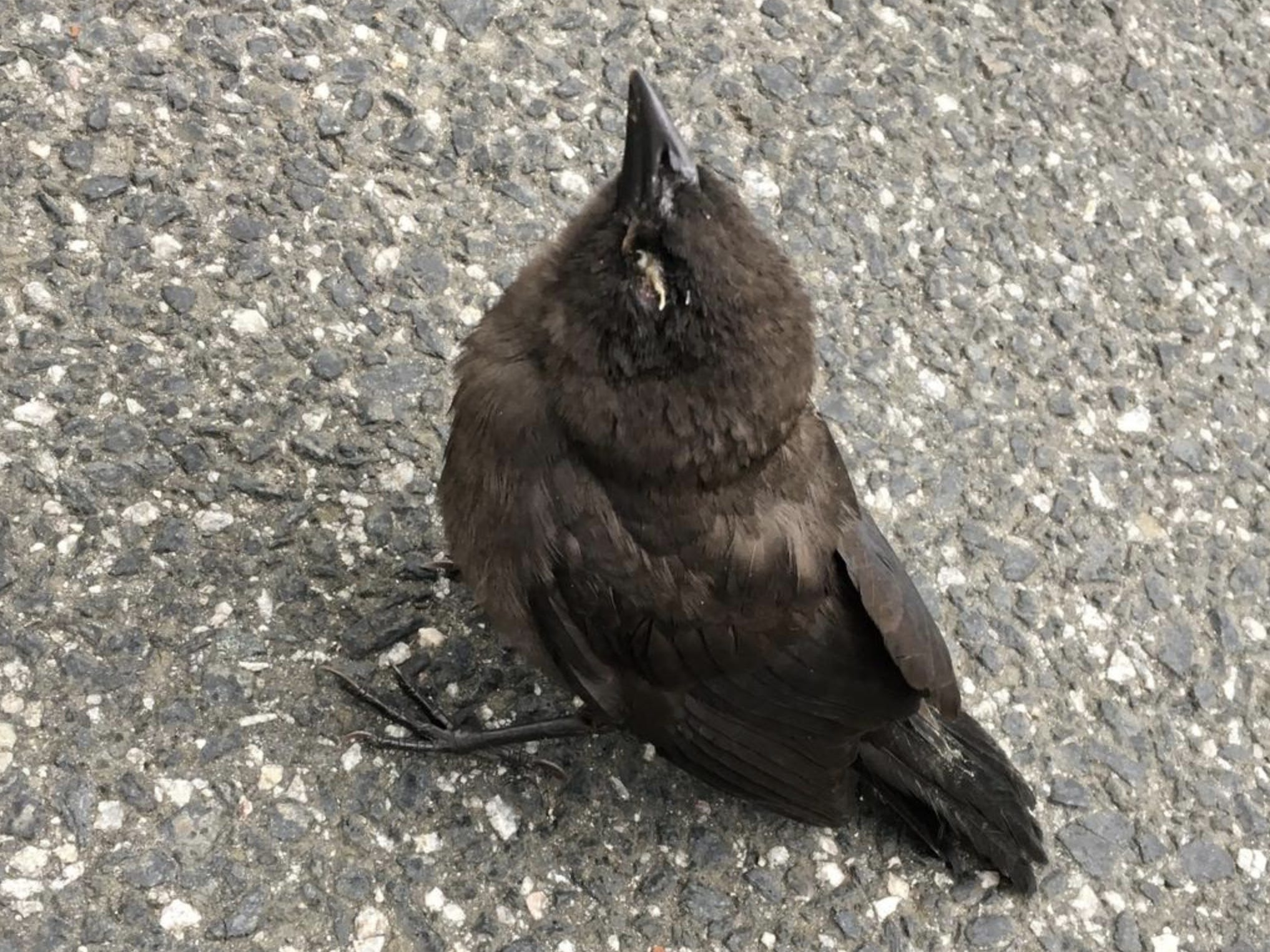 A bird found in Washington DC with swollen, crusty eyes, a common symptom of the strange illness.

A mystery illness has killed hundreds of songbirds in several US states.
It also causes the birds to act strangely, and lose some control of their limbs.
Scientists are testing for viruses, bacteria, and chemicals, but the cause is still unknown.
See more stories on Insider's business page.

Hundreds of songbirds across at least eight US states are dying from a mysterious illness with strange symptoms, but experts have no idea what's causing it.

The US Geological Survey said on June 9 that sick and dying birds were being reported in several US states, with neurological symptoms and some physical complications that include eye swelling and crusty discharge.

Birds with these symptoms have now been reported in Indiana, Ohio, Kentucky, Washington DC, Pennsylvania, Delaware, West Virginia, Virginia, and Maryland. Allisyn Gillet, an ornithologist with the Indiana Department of Natural Resources, said a large variety of songbirds are dying from the unknown illness.

The affected species include those that are typically seen in backyards – common grackles, blue jays, European starlings, American robins, and cardinals, among others.

It's 'as if they didn't have any control over their head'

Gillet said they realized something was going on when a local wildlife rehabilitation center in the state started taking in birds with the same combination of peculiar symptoms. The birds had eye swelling, crustiness, and discharge, to the extent that it hindered their ability to see.

The birds were also disoriented and exhibiting unusual behaviors, including walking in strange ways and stumbling around. They had little control of their limbs and would do things like kick their legs up while on their backs.

"They would sway their heads in strange ways, as if they didn't have any control over their head," Gillet said.

People were reporting the birds seemed oddly unafraid of people, but Gillet said they were likely just too blinded or disoriented to react. She said the mortality rate of the illness appears high, as most of the birds are dead shortly after they are reported to officials. There have been 280 confirmed bird deaths with these symptoms in Indiana alone, according to Gillet.

Diagnostic labs are testing the bird specimens for viruses and bacteria, and are conducting toxicology testing for chemicals. They have been able to rule out avian influenza and West Nile virus, but not much else.

"They haven't come to any conclusion. There are no definitive results right now," Gillet said.

One possible factor being explored is the recent brood of cicadas throughout the eastern US. The emergence of the cicadas aligns with the timing and range of the bird illness. Gillet said there's a correlation there, but a link has not yet been established.

In the meantime, officials in the impacted states are recommending citizens take down their bird feeders and bird baths, things that encourage birds to congregate.

"We want them to socially distance," Gillet explained. "We don't know enough, so we have to take the proper precautions."

She also recommended reporting instances of birds displaying these symptoms to local wildlife authorities. Some states, like Kentucky and Indiana, have online wildlife disease reporting systems where citizens can upload photos or videos of the afflicted bird.

Gillet said the illness is especially unfortunate given that birds in North America already face many threats, such as habitat loss, window collisions, and natural predators with inflated populations.

A study published in the journal Science in 2019 found 3 billion birds have vanished from North America since 1970, and that even common species are experiencing declines.

"It's unfortunate that there has to be another thing that is affecting their populations negatively," Gillet said.

Have a news tip? Contact this reporter at kvlamis@insider.com.