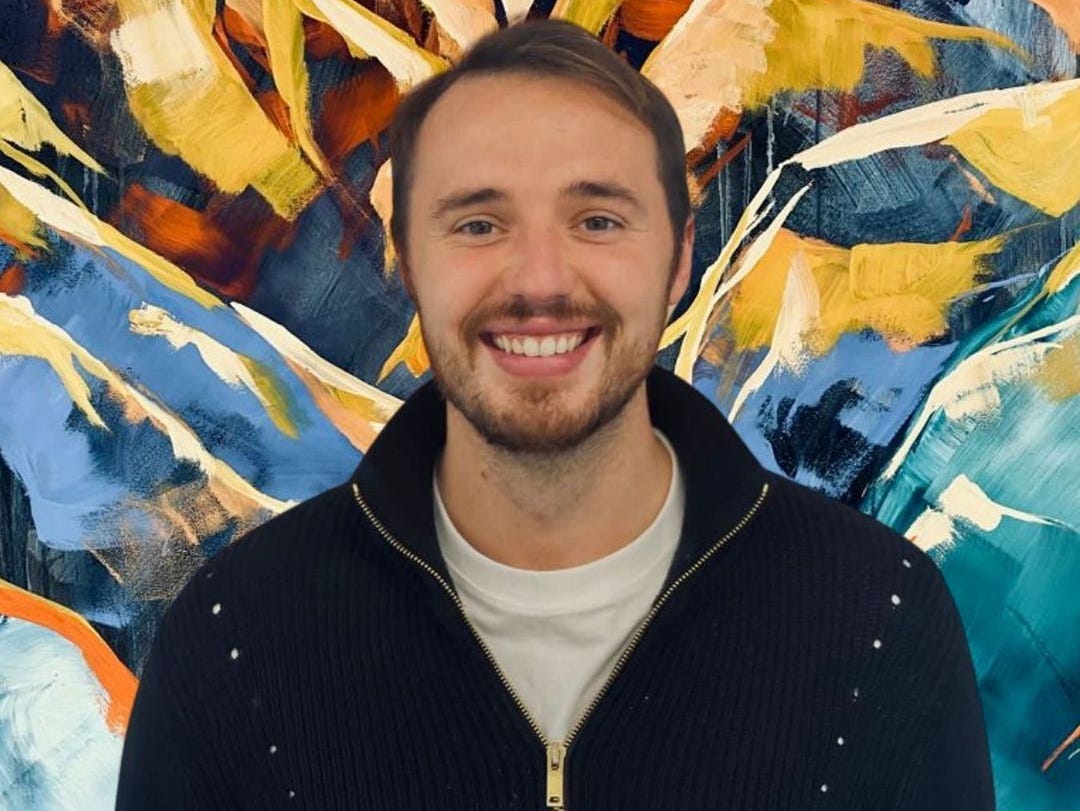 Dom McGregor, 28, is now five years sober. He stepped back from his role as Social Chain's COO in 2019.

Dom McGregor dropped out of university to cofound Social Chain, an agency now worth $650 million.
He increasingly turned to alcohol while navigating the highs and lows of startup life in his 20s.
He decided to get sober after getting so drunk at a work event that his cofounder had to intervene.

This as-told-to article is based on a conversation with Dominic McGregor, a 28-year-old entrepreneur and cofounder of the social-media agency Social Chain, about his struggles with alcohol and how he got sober. It has been edited for length and clarity.

The roller coaster of founding a company now worth nine figures began with a single tweet sent from my university dorm bathroom in January 2013.

I remember waking up hungover and walking down to the bathroom to find no toilet paper.

Instead of alerting my housemates or heading out to buy some, I tweeted a picture of the empty roll: #studentproblems. I decided to start a new account just for tweeting about my life at university.

I had rapidly gained a following of about 50,000 followers when Steve Bartlett, my future cofounder, approached me in February 2013. He was trying to set up his own online business for students and wanted my help.

We met up in a bar. By the end of the night, he persuaded me to drop out of university and pursue the venture with him.

I was 19 at the time. We started growing different student-focused social-media accounts to draw traffic, but we quickly realized that the social-media influence was more valuable than the website trade. So we got rid of the website and doubled down on growing social-media assets.

As freelancers, we began marketing these social assets to companies to pay us to advertise their products, as well as drive traffic and downloads. In April 2014, we traveled together, working flexibly from our laptops in Thailand and Brazil.

At this point, we were bringing in six figures each by advising clients in London, San Francisco, and New York. And in August of that year, one of our clients wanted to invest.

I was 21, Steve was 22, and we'd been operating causally while funding a lifestyle of traveling. Taking investment meant settling down and accepting a lot more responsibility.

We decided to move back to London. And the jump from having to only hold ourselves accountable to having a staff of 10 was huge. Because social media was still in its infancy, it was difficult to find anyone who had experience. The average age of our team was 21.

On the client side, we were flying: winning awards, securing huge deals, growing rapidly. But internally there were cash-flow problems. We started working on a 250,000 pound project, but we didn't get paid for 11 months. This was a recurring problem.

I was existing in two polar-opposite mindsets: I was an uber-successful 21-year-old with my own home and car. But I was also depressed and anxious, constantly thinking about HR issues, unpaid invoices, and delayed salaries.

In both situations, I would turn to alcohol. We had routine celebratory staff parties for every award we won and deal we made. But if I'd had a terrible day, I would go home to unwind with a drink.

This pattern worsened throughout our first year and into our second. By Christmas 2015, I was on a downward spiral. I'd function throughout the week, but then I'd fall apart over the weekends. I started isolating myself from my friends and colleagues.

One Friday night in the summer of 2016, I got the drunkest I'd ever been. For a few weeks, I'd been trying to limit myself to only one drink a night. Emboldened by my new self-control, I attended a nighttime work event. But it was obvious at this point that I was struggling with alcoholism.

I was derogatory toward one of my best friends and embarrassed myself in front of our entire team. When I woke up, Steve had texted me saying we needed to talk.

When he sat me down, I apologized. I felt broken.

It became a case of 'How do I rebuild myself and get sober?' I threw myself into work because that was what gave me stability and focus.

The most difficult part to accept was that it wasn't the success, the business, or Steve who was to blame for my problems. It was me. I think I always had the potential to become dependent on alcohol, but the pressure of becoming a successful founder accelerated it massively.

Slowly, I progressed. I don't remember much of the first five or six months. I walked around like a zombie. I had to remove myself from any social situation that would involve drinking. Although I was throwing myself into work, I had drawn a line between myself and the social aspects of the business.

At first, I wouldn't go to any events or after-work drinks. Steve and I were settling into roles as senior leadership, so distancing myself wasn't unheard of. I stayed at Social Chain as the COO for four years after this, working alongside Steve.

I think being sober made me a better founder, as well as a better person. It was an interesting point of conversation that people could approach me about.

I made friends with older peers who no longer drank and pregnant women at networking events – people who would have steered clear of drunk me.

My sobriety also came at a time when a natural divide needed to be formed between me and Steve as senior leadership and our employees. We needed that distance to effectively grow the company.

Going through that experience broke down any walls between me and Steve. We knew we could depend on each other for anything, and I think that was a major asset when growing our company.

Social Chain is now worth 500 million pounds, and although Steve and I have stepped back from our CEO and COO roles, respectively, we still chat often.

(Editor's note: In 2019, Social Chain merged with Lumaland AG and listed on the Frankfurt Stock Exchange. Its market cap as of November 10, 2021, was 565 million euros.)