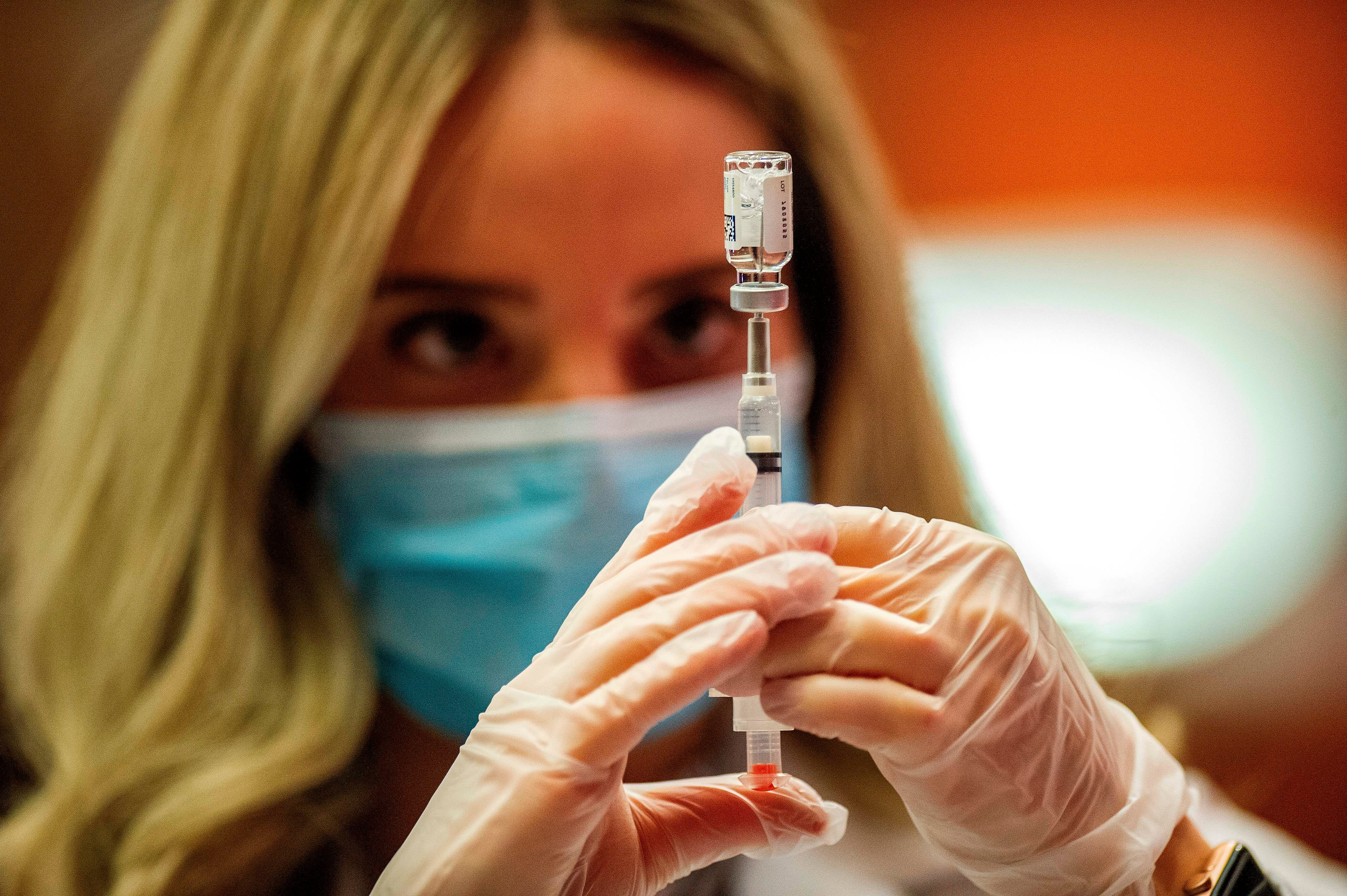 A pharmacist at the Hartford Hospital in Hartford, Connecticut, fills a syringe with the Johnson & Johnson COVID-19 vaccine.

Some of the industries hardest hit by the pandemic have finally started adding back jobs recently.
Healthcare, hospitality, and sit-down restaurant jobs are on the rise, according to job site data.
But some sectors, like education and government, are still lagging behind.
See more stories on Insider's business page.

The US added 379,000 jobs in February and the unemployment rate dropped from 6.3% to 6.2%, blowing past economists' forecasts and hinting at the start of a broader economic recovery.

But in early March, unemployment claims jumped to 770,000, also above estimates, as Americans began receiving stimulus checks, showing that the economy still has a long way to go. A recent Insider analysis found that, after accounting for misclassifications and people not actively looking for jobs, the real unemployment rate is closer to 9.1%.

The pandemic hit industries unevenly – hospitality and travel businesses were devastated, and many of the thousands of small businesses that had to close during the pandemic may never reopen – while e-commerce and food and grocery delivery businesses thrived.

Yet some of the hardest-hit industries are now leading the recovery as they finally start to rehire workers after months of layoffs and furloughs, according to data from job search websites viewed by Insider.

Healthcare, retail, sit-down restaurants, and even hospitality businesses are seeing major job growth, as are pandemic-tested jobs in manufacturing, software development, warehouse and logistics. However, education and public sectors still lag behind, based on Insider's analysis of government data and insights from five top job posting websites – Flexjobs, Indeed, Joblist, Monster, and Snagajob.

If you're one of the many Americans still looking for work, here are some of the industries that are hiring at the fastest rates.

After hospitality jobs dropped by 63% last April, more than any other industry, they're finally starting to bounce back – and the industry is even leading the US' recent surge in job growth as lockdown orders begin to ease. Out of the 379,000 jobs added last month, 355,000 came from the hospitality industry, according to the latest job report from the Bureau of Labor Statistics.

As of March 15, hospitality jobs on Snagajob were up 54% from mid-February and 141% from last March. Indeed's latest jobs report, using data through March 12, found that hospitality jobs were still down 27% from their pre-pandemic baseline of February 1, but had still seen an 8% jump from four weeks ago.

But the hospitality industry's long-term outlook still depends heavily on whether and when business travel picks up again, with many experts predicting that companies will permanently cut back on travel expenses.

As more states allow sit-down dining again, restaurants are quickly ramping up to meet customers' pent-up demand. Of the 355,000 hospitality jobs added in February, the BLS said that 286,000 – around 80% – came from restaurants and bars.

Snagajob found that sit-down restaurants saw a 16% month-over-month spike, even as quick-service restaurants were flat during that same time. Joblist CEO Kevin Harrington said server, bartender, and host jobs have all been growing recently.

Retail stores added 41,000 jobs last month, according to BLS data, though Indeed found that it's been a mixed bag in metro areas where many people are working from home.

"More than two million healthcare jobs were lost in April 2020 alone, and only about half of these jobs have returned since," Harrington said, adding that a recent Joblist survey "found that more than 50% of working Americans reported skipping medical or dental care in the last year."

But amid the country's massive vaccination effort, pharmacy jobs are up 10.9% from mid-February and 49.2% from February 1, 2020, while nursing and medical-technician jobs are also on the rise, according to Indeed.

The gig economy, which included a large, growing, and hard-to-measure segment of the US' blue- and white-collar workforces even before the pandemic, saw a major boost as Americans scrambled to find any source of income.

Snagajob has seen posts for on-demand jobs increase 53% month-over-month and a whopping 470% year-over-year, while Joblist saw a 40% jump in "freelance" jobs last summer.

"This trend has continued in recent months as companies embrace remote freelancers as an alternative to making full-time hires in this uncertain economic climate," Harrington said. "The supply of skilled remote labor is as high as it has ever been right now, and many companies have now figured out how to conduct business remotely."

While blue-collar gig jobs may have shifted from moving people to moving food, packages, and other goods, during the pandemic, Harrington said all types of gig work are here to stay.

Major companies like Amazon, Uber, Google, and Facebook already make widespread use of contractors because they're cheaper, pose less legal risk, and allow companies to grow and shrink their workforces more flexibly. Other industries are increasingly adopting this model.

The boom in e-commerce during the pandemic sparked a rise in warehouse jobs that has continued even past the holiday season.

As was the case before the pandemic, there's once again significant demand for software engineers and project managers, according to Joblist, while Monster has seen a spike in jobs involving computational and math skills.

While not industry-specific, job postings for business roles that can be done remotely have soared during the pandemic as companies become more accepting of remote workforces.

Some industries have yet to restart hiring efforts in significant numbers – and some even continue to bleed jobs.

Monster and Joblist have both seen recent declines in construction jobs, partly due to the winter weather and related supply chain issues.

State and local government jobs also declined recently, according to Joblist and BLS data, while Flexjobs also found a lower availability of remote jobs in this sector.

School closures and plummeting college enrollment rates during the pandemic hit schools' pocketbooks hard, and many have yet to bounce back. Indeed found just a 2.7% increase in teaching jobs since mid-February, down 4.6% since pre-pandemic days.