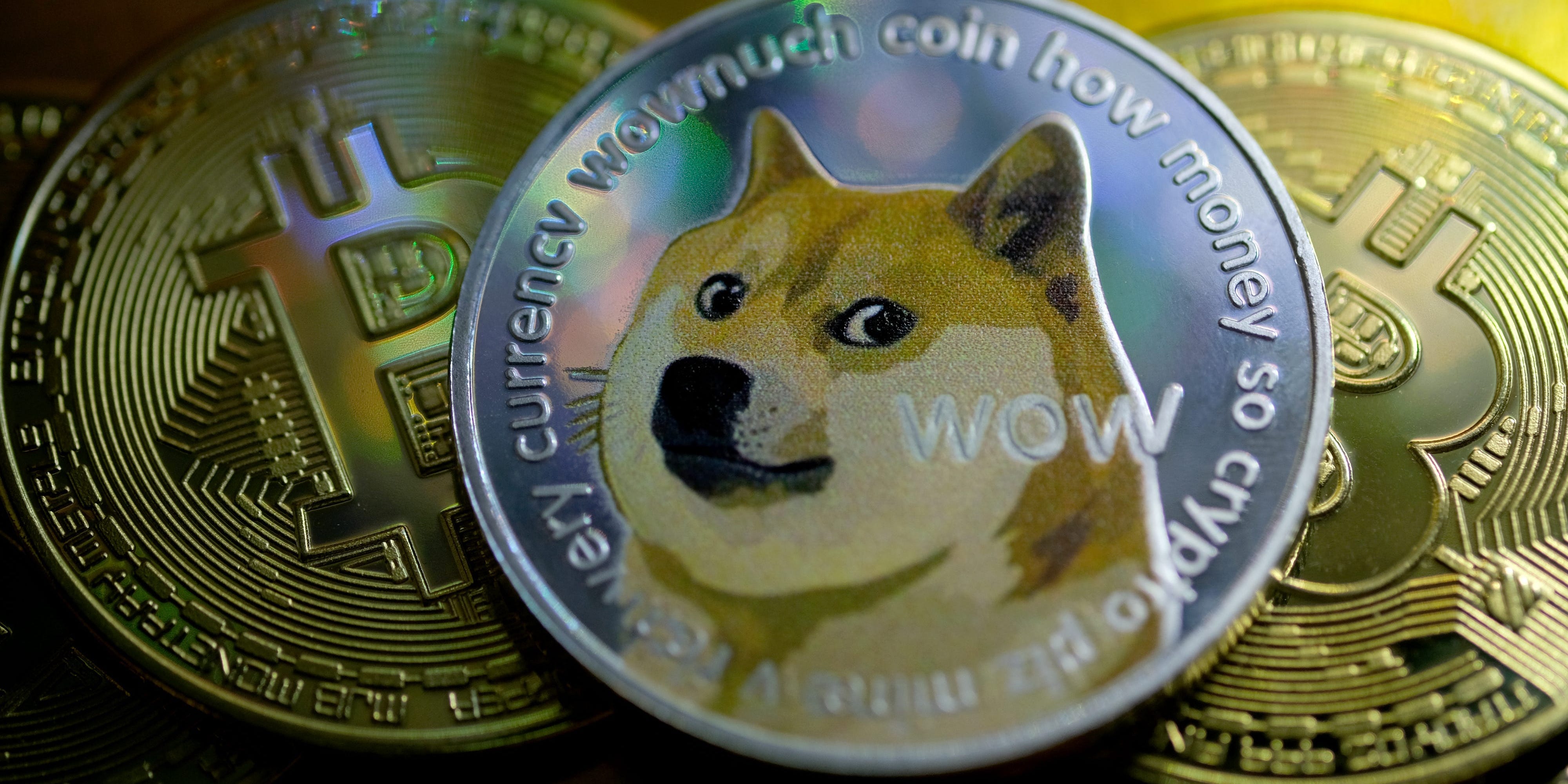 Dogecoin is a 'meme' cryptocurrency, seemingly created as a joke

Safemoon, a new digital token launched in March, has rapidly captured the attention of crypto traders.
Searches for the new cryptocurrency this week peaked early on April 20, the day dogecoin was meant to soar to $1.
"SafeMoon is similar to dogecoin in the sense that it is unclear what the utility of the project is or will be," Ava Labs president John Wu told Insider.
Sign up here for our daily newsletter, 10 Things Before the Opening Bell

But instead of seeing their favorite meme-based token rocket to $1, dogecoin enthusiasts watched as chatter on social media coalesced around a lesser known coin: safemoon.

Safemoon launched in March and is up by roughly 2,000% in a month, according to CoinGecko. Searches for the cryptocurrency this week peaked early on April 20, as momentum was meant to be building behind dogecoin. The coin climbed to a high of $0.00000904 at around 11 a.m. ET Wednesday, and continued its climb by 3% until the next day, according to CoinGecko.

To the dismay of dogecoin fans, meanwhile, the meme token slipped 18% Thursday after reaching a high of $0.42 and has continued to slide since, even dipping under $0.20 briefly on Friday.

Safemoon is a decentralized finance token launched in March 2021. Its tagline, according to its website, is "Safemoon to the Moon!", a similar slogan trumpeted by dogecoin fans. "To the moon" has been spouted by celebrities including Elon Musk, a vocal supporter of dogecoin who has been known to push the token higher with his inscrutable tweets.

"Safemoon is similar to dogecoin in the sense that it is unclear what the utility of the project is or will be," John Wu, president of Ava Labs, the team behind altcoin avalanche, told Insider.

He continued: "Worst case, this is a scam or Ponzi scheme. Better case, this was a euphoric rally driven by TikTok and other viral marketing engines."

However, unlike dogecoin and other cryptocurrencies, safemoon encourages investors to hold. On its website, it said holders will earn passive rewards through "static reflection." This means the team behind safemoon plans to make the reward dependent on the volume of the token being traded. Safemoon in fact charges those selling it a 10% exit fee and distributes half that fee to other holders.

Ian Balina, founder and CEO of Token Metrics, a data-driven investment research platform for crypto, said while there isn't much to say about safemoon just yet, especially when it comes to its blockchain, its trading volume is getting some attention.

"It is very popular online," Balina told Insider. "People are just taking up tokens just like dogecoin based on social media."

The new cryptocurrency has gained traction on social media, TikTok in particular, with one video promoting the coin garnering nearly half a million views.

Ben Weiss, CEO of CoinFlip, which provides bitcoin ATMs across the US, said safemoon has social-engineered its way into social media trends and built a community of hype and speculation around it.

"[Social media] has caused it to rally and people are buying into the hype without much knowledge of safemoon utility or if they don't want to miss out on the next Dogecoin," he told Insider. "Since blockchain and cryptocurrencies are still so new and people are seeing crazy price actions around them, it's no surprise to see similar projects like this that feed on hype."

Here are what five other experts think of the latest craze sweeping the crypto market:

"Safemoon is one of a number of new cryptocurrencies appearing on the market which attempt to address some of the problems that Bitcoin and other cryptos have that block mass adoption. For example, Bitcoin is notoriously volatile its valuation can vary wildly from one day to the next and that makes it undesirable for day-to-day commerce or business activity. Safemoon's exit fee is an attempt to create crypto with less price volatility and therefore more utility in real world applications." – Harold Montgomery, managing director at Wirex USA

"SafeMoon seems like just another meme coin that is driving retail FOMO into it. Safemoon's built-in functions seek to penalize sellers of its token while rewarding holders. It charges sellers high transaction fees for selling the token and pays a portion of that fee to holders. To sophisticated traders, this concept is not attractive as it artificially inflates the price in the short term without a clear benefit for long-term holders. If the safemoon team comes up with a legitimate innovation, it could potentially benefit from its creative name and its branding." – Kapil Rathi, co-founder & CEO at CrossTower

"With Ethereum transaction fees so high in recent weeks, herds of retail investors have started migrating towards Binance Smart Chain (BSC), a more centralized competitor that's significantly cheaper to use (for now), albeit with a much less mature developer ecosystem. At the same time, TikTok has really started to take off as a platform for crypto influencers, and several of these influencers have started to direct their followers towards new tokens on the BSC platform. Safemoon is one such example of a new project on BSC with untested tokenomics that relies on Ponzi-like mechanics that penalize sellers for selling the token. It also appears to reward holders in aggregate by giving them half of the sellers' tokens through a shared liquidity pool, thus incentivizing them not to sell as part of a "carrot and stick approach.- Demetri Kofinas, creator and host of Hidden Forces, a weekly podcast

"Despite its recent surge, it is important to point out that safemoon is relatively new in the market and investors need to weigh in the potential risks before purchasing safemoon tokens. Personally, I believe it is too soon to pass judgment on its success as its rising value could just be a part of the trend that's pushing dogecoin prices up … The company behind safemoon is however planning on launching its own exchange through a $1 million funding, over half of which has already been raised. It's clear that they're heading for the big leagues like Coinbase where they're aiming to list themselves." – Peter Jensen, CEO at RocketFuel Blockchain

"We take great care when thinking about what assets to make available to our millions of customers around the world. Innovation in the crypto space is happening at a breakneck pace and it can be hard to truly judge a quality project from a lower-quality project if you don't have enough information. We urge everyone to educate themselves on cryptocurrencies before investing, to make sure you're using a trustworthy trading platform, and be cautious of anything that seems too good to be true. For context, we do not list SafeMoon."- Jason Karsh, VP of marketing at Blockchain.com