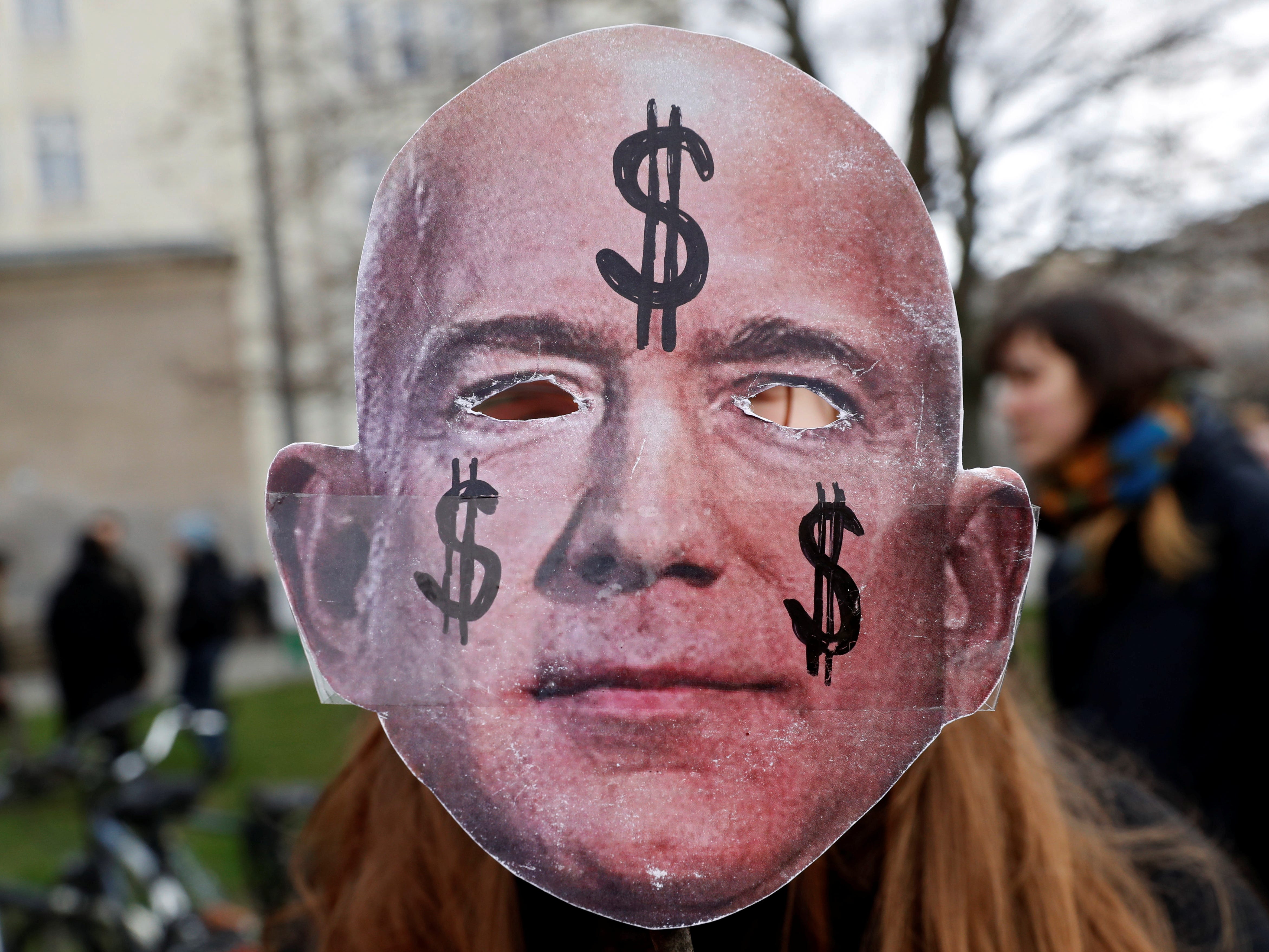 An activist holds up a mask depicting Amazon founder Jeff Bezos, during a protest against the opening of a new Amazon office in Berlin, Germany, February 22, 2020.

Amazon warehouse workers in Europe will swap notes this weekend on how to pressure the retail giant to improve their working conditions.
Members of the Amazon Workers International coalition will gather in person and virtually to discuss how to make the temporary improvements introduced by Amazon during the pandemic permanent.
It comes after French unions successfully forced Amazon to suspend its operations in France this summer.
Amazon has largely managed to tamp down on union activity in the US, but the French case shows labor activists may have more success in Europe.
A spokesperson for Amazon said the firm believed in constructive discussions with unions, and said the firm already offers “industry-leading” pay.
Visit Business Insider’s homepage for more stories.

European Amazon workers will unite in Lille, France, this weekend to campaign for better working conditions after the pandemic and discuss international industrial action.

Members of Amazon Workers International (AWI), a movement of French, Spanish, Polish, German, and American warehouse workers founded in 2015, will gather in person and virtually for a two-day conference.

In March, Amazon introduced temporary safety measures in its warehouses in response to the coronavirus, including additional time at breaks, more space between workers, and increases in pay of around $2 per hour.

AWI wants to make these changes permanent. The group has an online following of 1,500 and up to 50 members will join the meeting, French organizer Jean-Luc Bérot told Business Insider.

Members will plan future campaigns and learn about labor laws in other countries.

Bérot and other organizers have planned presentations on the French labor law that led Amazon to suspend its French operations in March after a court ordered Amazon to limit deliveries to essential goods.

Bérot became active in French unions after suffering from tendinitis as a warehouse worker. He joined AWI to lobby Amazon’s European headquarters in Luxembourg.

He told Business Insider: “The pandemic has shown that the measures taken by Amazon are imposed by Seattle and then Luxembourg for Europe, so negotiating at a national level is less effective.”

In Germany, AWI is active in around six major distribution sites. Christian Krähling, a German warehouse worker, believes Amazon’s global system requires a global response. He said: “[Fulfilment centers in Poland] deliver half of the goods that are delivered to Germany. If we go on strike in Germany, they will send the goods from Poland.”

Over the pandemic, Bérot said the group had connected with environmentalist group Amazon Workers for Climate Justice.

Though Amazon France did not comment on AWI, a spokesperson told Business Insider: “Amazon already offers most of what these groups are requesting: industry-leading pay, social benefits, and opportunities for career growth.”

In July, Amazon France agreed a 1.6% permanent pay rise for all French workers following negotiations with unions and a bonus for front-line workers.

The spokesperson for Amazon France said: “We believe in constructive social dialogue with unions to reach agreements that are in the employees’ interest.”

During the pandemic, Bezos’ wealth has increased by $73.2 billion, according to a report released last week by the Institute for Policy Studies and Americans for Tax Fairness.