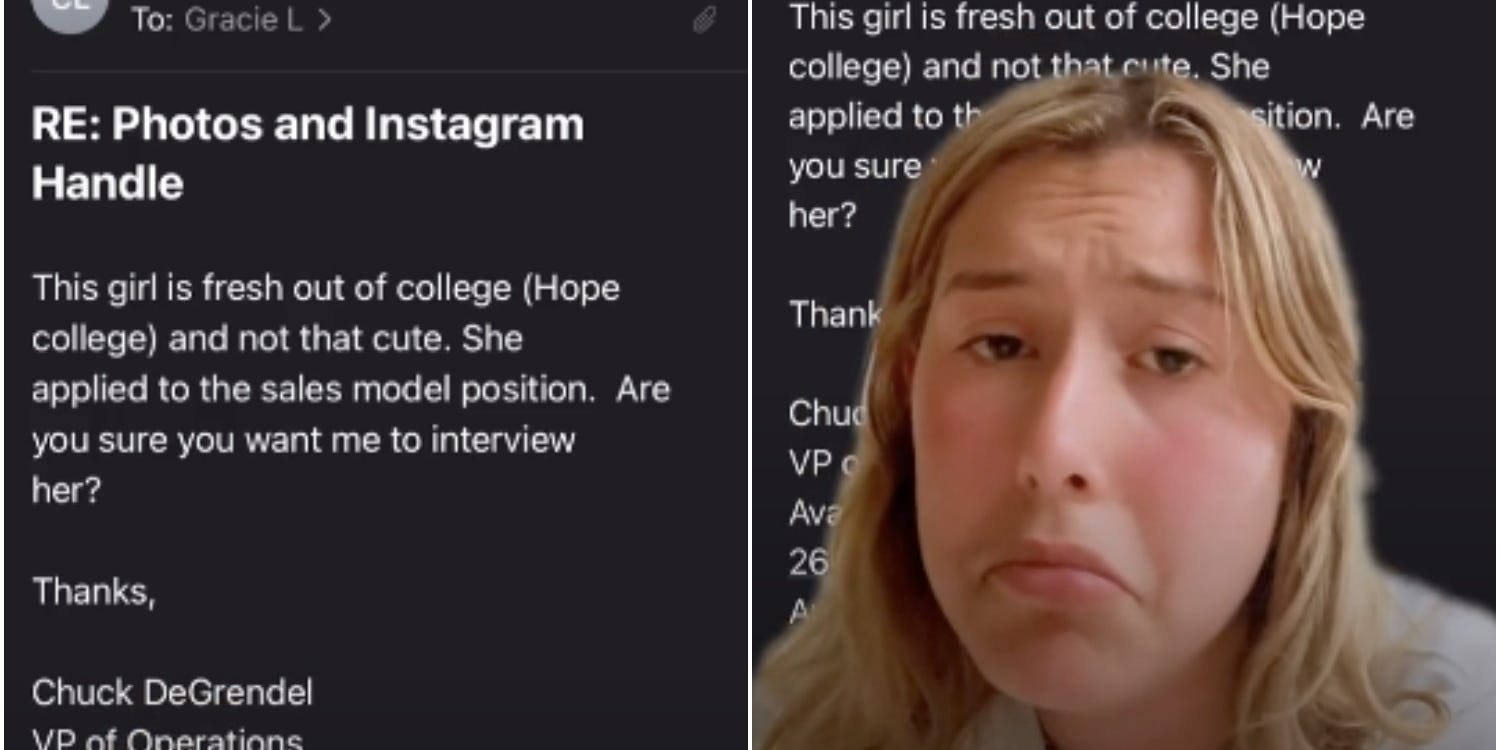 Gracie Lorincz, 21, made a TikTok video about an email she accidentally received from the VP of Operations at Ava Lane Boutique in Auburn Hills, Michigan.

A girl who applied for a job at a Michigan boutique store outed its boss for calling her "not that cute" in an email.
In a viral TikTok video, Gracie Lorincz said she was hurt after receiving the email accidentally.
The owners of the store apologized on Facebook Live and said they're receiving online abuse.
See more stories on Insider's business page.

A hiring manager at a beauty boutique in Auburn Hills, Michigan, has publicly apologized after a prospective employee outed him for saying she shouldn't be interviewed because she was "not that cute," according to the New York Post.

Gracie Lorincz, a 21-year-old recent college graduate, posted a TikTok video on Thursday in which she showed an accidental email sent to her by the vice president of operations of family-owned beauty boutique Ava Lane Boutique.

The email, sent by Chuck DeGrendel, says: "This girl is fresh out of college (Hope College) and not that cute. She applied to the sales model position. Are you sure you want me to interview her?" The email was actually meant for DeGrendel's wife and co-owner, Laura DeGrendel.

Read more: From 'vanilla' skirt suits to 'too-tight' shirts: Female lawyers describe how it's impossible to win when it comes to professional dress codes

Lorincz, who applied for a position as a brand representative, posted a screenshot of the email on TikTok alongside the sarcastic caption: "Feeling amazing."

The video has since gone viral, amassing more than 1.7 million views at the time of writing.

On their Facebook group, which has since been set to private, Ava Lane Boutique purports to have built an "amazing community of women who empower each other through positivity and fashion."

Chuck DeGrendel has since made a tearful apology video on Facebook Live video.

"I sent a reply back to Laura that said that she was a recent college grad, and I didn't feel that she was that cute, so I wasn't sure if we wanted to proceed with an interview," Chuck says in the video. "I don't know why I said that, but I did, and I'm very, very sorry for saying that because it was very unprofessional and really not in line with our core values here, or my core values in general."

His wife, Laura, also appeared in the apology video and claimed that the family's phone numbers and address had been shared and that their children were receiving death threats, the Post reported.

Laura claims Lorincz urged her TikTok followers in the video to make these threats, although there is no mention of this.

Lorincz's mother, Heather Lorincz, told Fox News that the email made her daughter "feel terrible" and that the Facebook Live apology was not enough.

"She is a sweet kid, she is not an attention hog, she is not a social media personality and didn't anticipate what this turned into," Heather said, according to Fox News. "I don't want this woman's business to suffer. I don't. But I feel my daughter deserves a real apology, not a Facebook Live."