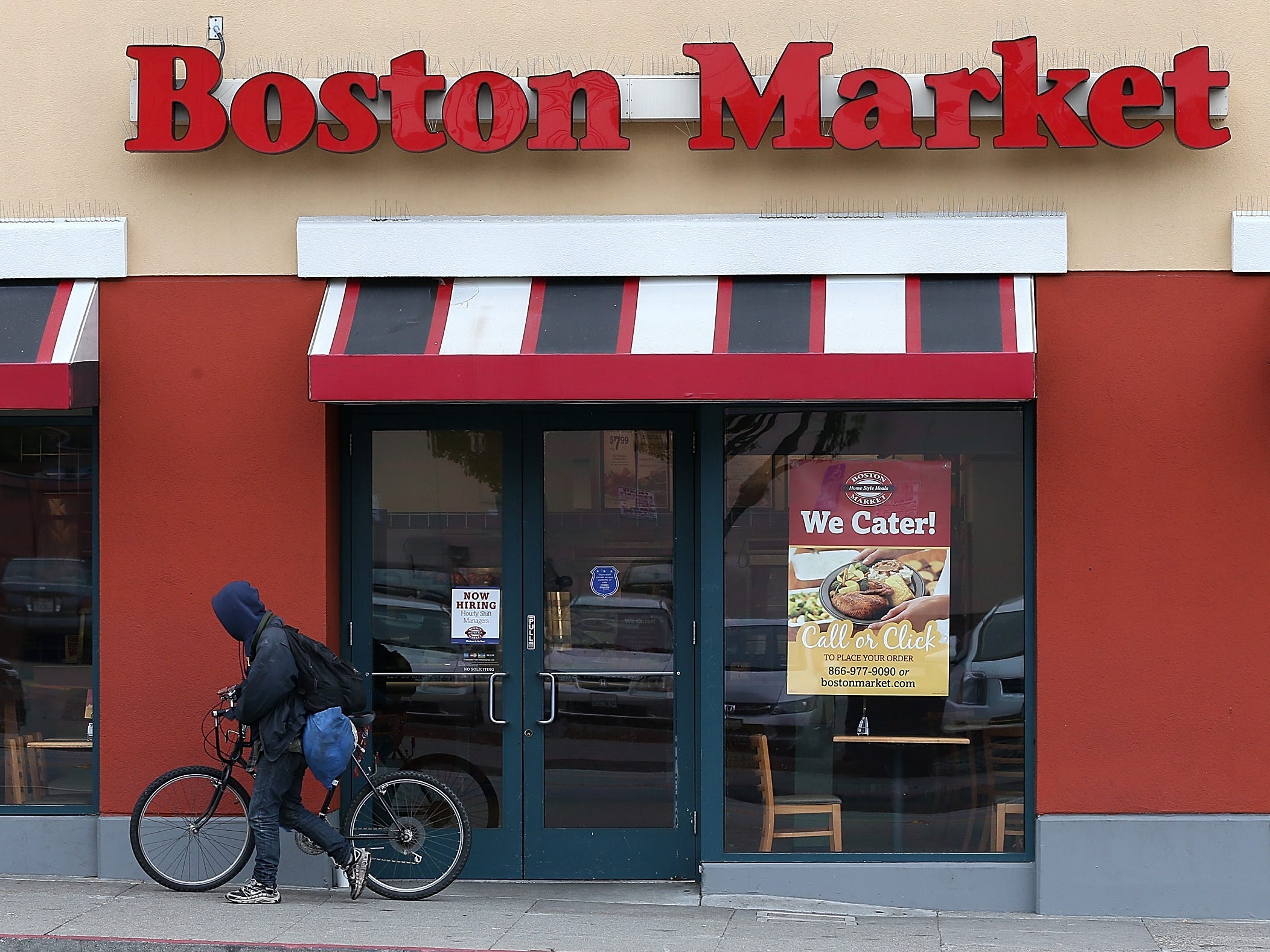 A Boston Market restaurant in San Francisco, California. Staff at one of the chain's restaurants in Los Angeles didn't show on Thanksgiving, reports say.

A Boston Market restaurant in LA shut on Thanksgiving after staff didn't show, reports say.
"No employees showing up today… We are unable to fulfill the orders," a sign at the restaurant read.
The company said it was refunding people who had preordered Thanksgiving meals.

A Los Angeles restaurant shut on Thanksgiving after staff didn't show up, leaving customers unable to collect preordered meals, per reports by The Daily Bulletin and KTLA. It comes amid a surge in hospitality staff resigning from the industry.

The Rancho Cucamonga branch of Boston Market, a restaurant chain specializing in rotisserie chicken, was closed when customers arrived to collect their meals, The Daily Bulletin reported.

The publication shared a photo of a sign it said was posted on the restaurant door, which read: "No employees showing up today… We are unable to fulfill the orders!!! We are sorry!!!" It's unclear who the sign was written by.

A second sign underneath it appeared to encourage customers to instead order from a nearby bakery, which it said was accepting orders.

The company did not immediately respond to Insider's request for comment, but a spokesperson told The Bulletin that it was investigating the incident.

"We are in the process of refunding the Thanksgiving order(s) of every guest impacted by our Rancho Cucamonga location," the spokesperson said. "We sincerely apologize to every guest who placed an order and came to the restaurant today."

As well as having dining rooms, Boston Market restaurants offer catering services, including premade Thanksgiving meals that customers can preorder, collect from the location, and heat at home.

Adam Sharp told KTLA that his family had preordered a meal for 12 people that cost around $400. He said that the food was visible inside the store but that customers weren't able to access it, and that the restaurant had never contacted him to say that the order wouldn't be available.

Joseph Amato, who had also preordered a Thanksgiving meal, told The Bulletin that he had similarly never been contacted about the restaurant's closure.

The Rancho Cucamonga restaurant is usually open from 11 a.m. to 10 p.m., per opening times listed on its website.

Record numbers of Americans have quit their jobs in recent months, and restaurants have been especially hard hit. The industry is known for its low wages, poor benefits, long hours, and stressful working conditions.

Restaurants have been raising prices, cutting opening hours, closing their dining rooms, and even shutting for good because they can't find enough staff.

Like the Boston Market restaurant, other restaurants have temporarily closed after finding themselves short-staffed. This includes a Chipotle restaurant in Austin, which closed for a day after its general manager and four of his employees quit.

It's unclear why staff didn't show up to the Boston Market Rancho Cucamonga on Thursday. On its website, it has 18 job listings, including positions as cashiers, cooks, and as well as a general manager role. The listings say that hourly employees can get discounted meals while they're working and are eligible for medical, dental, and vision insurance after a year, though wages aren't listed.

Got a story about the labor shortage? Email this reporter at gdean@insider.com.