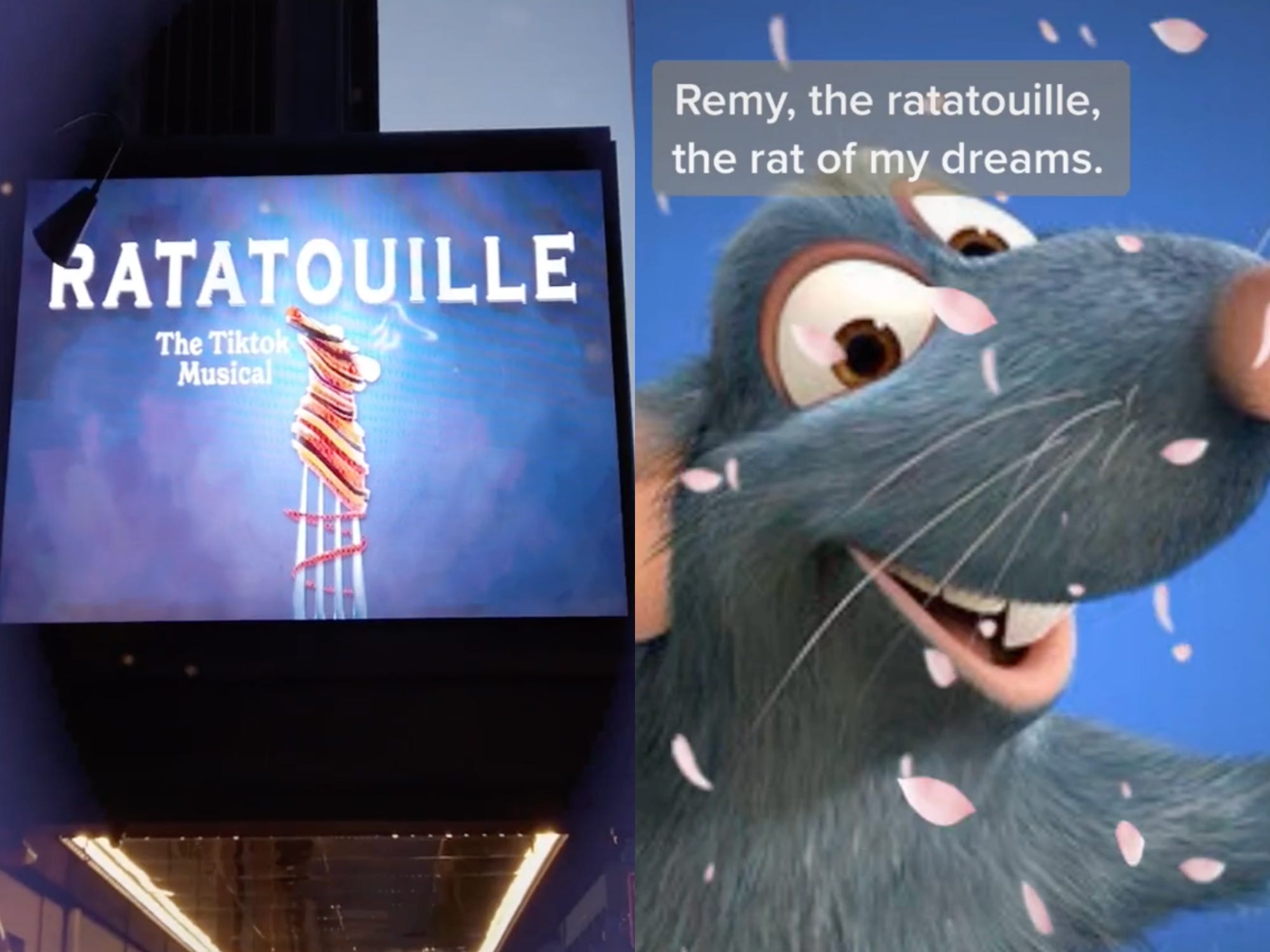 The "Ratatouille: The TikTok Musical" marquee as it appears in the event trailer.

“Ratatouille: The TikTok Musical” earned over $1 million in ticket sales from its virtual New Year’s Day stream, according to The Hollywood Reporter and a tweet from the production’s official Twitter account.
What started as a TikTok trend became a Broadway-scale online production featuring Tony-, Emmy- and Grammy-nominated performers like Wayne Brady, Tituss Burgess, André De Shields, and Ashley Park.
Some proceeds from the virtual performance, also known as the “Ratatousical,” will go to The Actors Fund, a charity that supports performers and other entertainment workers who have been hit hard by theater closures during the coronavirus pandemic.
Visit Business Insider’s homepage for more stories.

“Ratatouille: The TikTok Musical” earned over $1 million in ticket sales from its virtual New Year’s Day stream, according to The Hollywood Reporter and a tweet from the production’s official Twitter account.

The project, which Insider’s Palmer Haasch previously reported began as a series of user-generated videos on TikTok, was picked up by the theater production company Seaview Productions and turned into a Broadway-scale musical starring Tony-award winning talent and the 20-piece Broadway Sinfonietta orchestra.

Some proceeds from the benefit event (which will be streamable for 72 hours) will go to The Actors Fund, a charity that supports performers and other entertainment workers who have been hit hard by theater closures during the coronavirus pandemic. Broadway venues shut their doors on March 12, 2020, and aren’t expected to reopen until May 30, 2021 at the earliest.

Based on the Pixar film “Ratatouille,” Seaview’s musical includes 12 rat- and cooking-themed songs performed by actors like Wayne Brady, Tituss Burgess, Andrew Barth Feldman, André De Shields, and Ashley Park. The show was initially tested out in a series of TikTok posts where users created their own musical renditions of scenes from the film. One creator, Jess Siswick, even designed a playbill for the musical that was eventually turned into the project’s official Playbill.

TikTok has become a central hub for music artists and other performers over the past year as many in-person events have shut down during the pandemic. One need look no further than the Billboard 100 or Spotify Viral 50 to see how TikTok trends have left an imprint on the entertainment industry in recent months.

Artists’ songs can rise on TikTok quickly and unexpectedly, as was the case with Matthew Wilder’s “Break My Stride” and Fleetwood Mac’s “Dreams” which reemerged into pop culture last year after gaining steam on the app. In other instances, marketers or artists try to make songs take off by tapping into existing TikTok fads, creating original songs, or adapting tracks for TikTok’s short-video format and hiring influencers to promote them.

In the case of “Ratatouille: The Musical,” the group was able to pull together the TikTok-born concept into a full-scale streamable performance in a matter of weeks.

“This event really highlights a lot of the TikTok creators, and we’re very happy we got this recognition,” Christopher Routh, the project’s set designer, told the New York Times. “We can take our content and do something good with it, not only raise money for the show but make sure that Broadway comes back stronger than ever.”

For more stories on how TikTok has left its mark on the music and entertainment industries, read these other Business Insider posts:

How a 91-year-old record label is using TikTok to promote its artists, including hiring micro influencers to spark trends: RCA Records’ digital marketing lead, Tarek Al-Hamdouni, walked Business Insider through the label’s strategy for promoting artists and songs on TikTok.The 24 power players using TikTok to transform the music industry, from marketers and record execs to artists: Business Insider compiled a list of the music marketers, artists, digital creators, and record labels that are using TikTok to reshape popular music.Inside TikTok’s music division, where staffers analyze data to spot trends and use different ‘promo levers’ to help songs blow up: Business Insider spoke with TikTok’s music team to learn how it works with artists, labels, and users to shape the music experience on the app.A Sony Music exec explains the label’s TikTok strategy and how it responds when a song like ‘Break My Stride’ catches fire: Business Insider spoke with the marketing team at Sony Music’s Legacy Recordings to learn about its strategy for promoting trending songs on TikTok.Music artist Tiagz explains how he mastered TikTok’s algorithm to score a major record deal, with help from Charli D’Amelio and a 1950s jazz classic: The Canadian rapper Tiagz (Tiago Garcia-Arenas) has built a career as a producer by strategically uploading songs to the short-form-video app TikTok.Read the original article on Business Insider