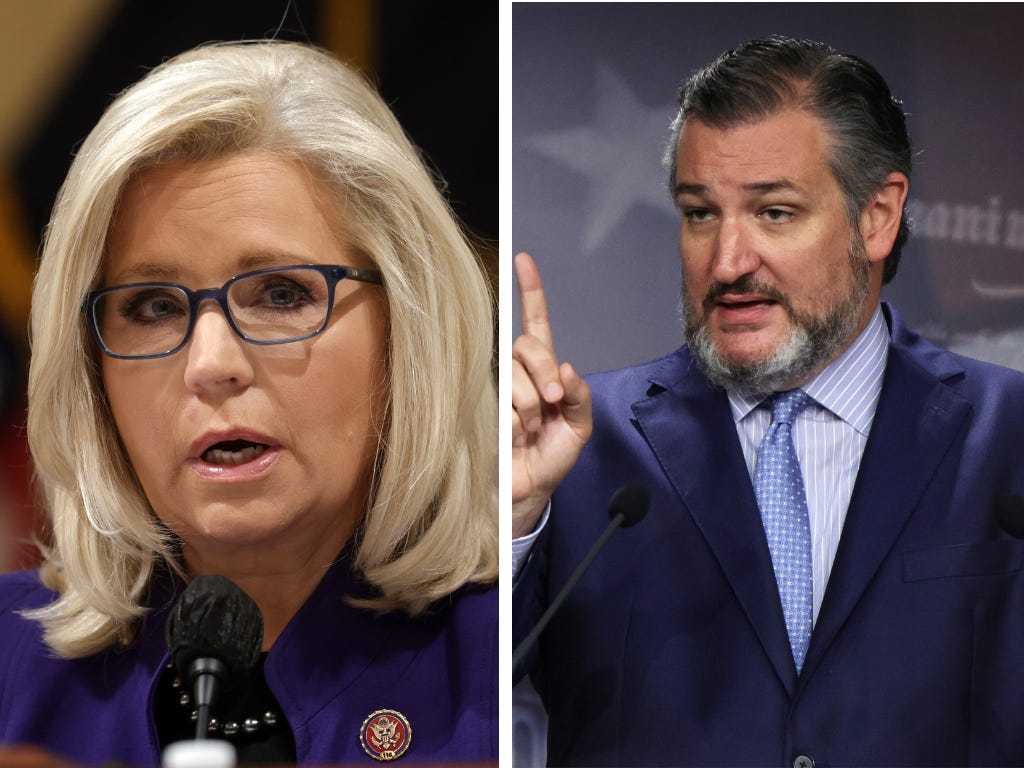 Rep. Liz Cheney and Sen. Ted Cruz locked horns after Cruz took a swipe at the Wyoming lawmaker, suggesting that she run for president as a Democrat.

Sen. Ted Cruz suggested Rep. Liz Cheney run for president as a Democrat.
In response to a clip discussing if Cheney had a shot at the presidency in 2024, Cruz tweeted: "Yes. It's called the Democratic primary."
This week, the Wyoming GOP voted to not recognize Cheney as a Republican.

Texas Sen. Ted Cruz has suggested that if Wyoming Rep. Liz Cheney wants to run for president in 2024, she should do so as a Democrat.

A clip posted by CNN's "The Lead" showed a panel discussing Cheney's chances in the 2024 presidential election. The clip was captioned: "Is there a lane for Liz Cheney in New Hampshire in 2024?"

Cruz retweeted the clip on November 14, writing: "Yes. It's called the Democratic primary,"

Cheney replied to Cruz several hours later, tweeting: "I know you're posturing for the secessionist vote, Ted. But my party, the Republican party, saved the Union. You swore an oath to the Constitution. Act like it."

Her comments likely refer to an earlier comment in which Cruz said that Texas could secede if "things become hopeless" in the US.

Cheney has been on the outs with the GOP since she voted to impeach former President Donald Trump and opted to serve as vice-chair of the House select committee set up to investigate the January 6 Capitol riot. She has become one of the prime targets of Trump's online mocking and was ousted from her role as chair of the House Republican Conference in May.

Cheney has made it clear she still considers herself a Republican, saying in September that she was not ready to "cede the Republican party" to the "voice of extremism." However, in a symbolic vote on November 15, the Wyoming Republican Party said it would no longer recognize Cheney as a Republican.

Cheney previously told the New York Post she has not ruled out running for president in 2024.