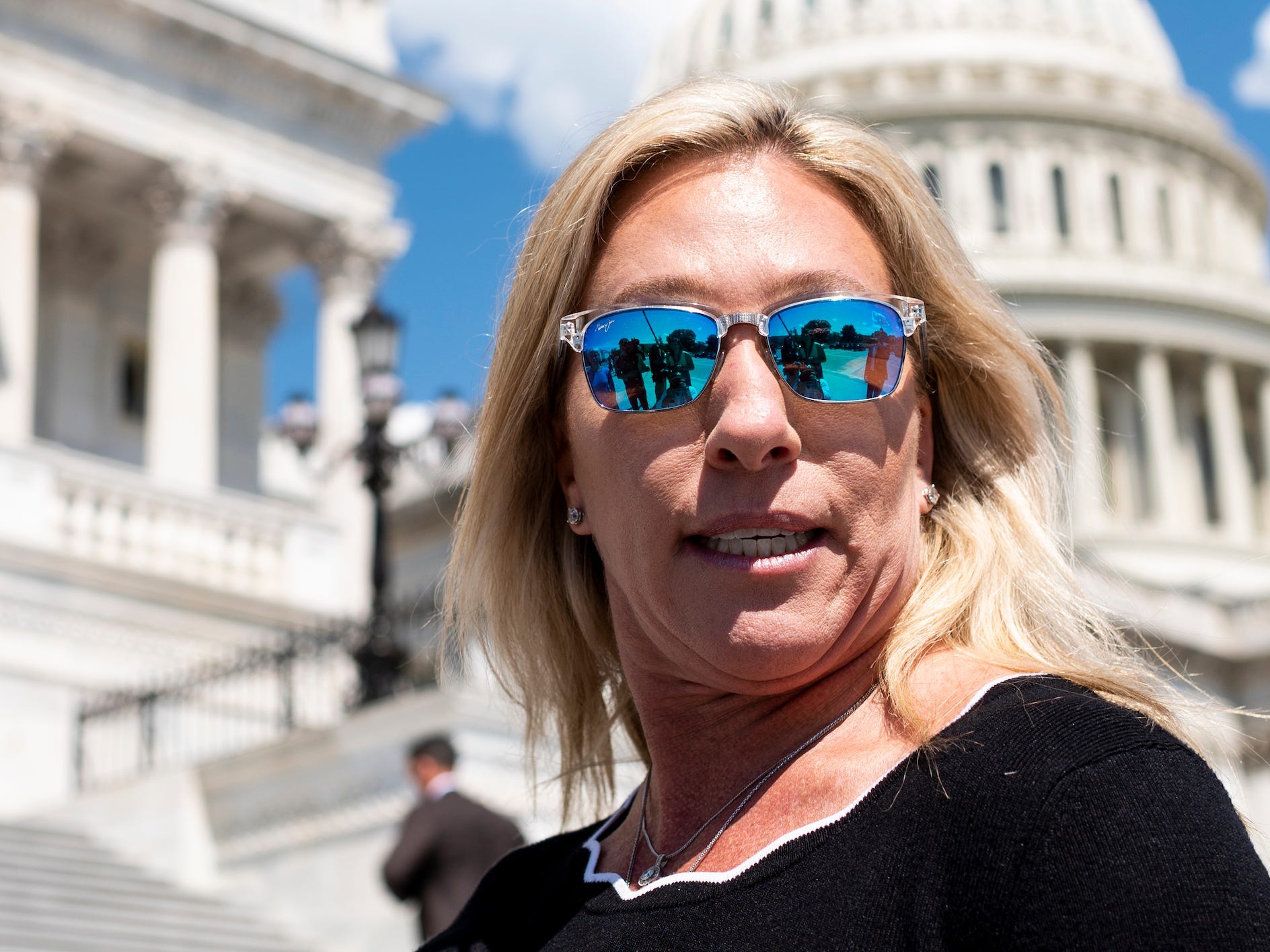 Rep. Marjorie Taylor Greene appeared to contradict former president Donald Trump this week by encouraging GOP voters to "flood the polls." Trump last week said his supporters should not vote in 2022 or 2024 if the Republicans do not back his election fraud claims.

Rep. Marjorie Taylor Greene contradicted former President Donald Trump in a tweet calling for GOP voters to flood the polls.
Greene on Monday told Republicans to "stop listening to grifters telling you not to vote."
Trump released a statement last week saying his supporters should not vote in 2022 and 2024 if the GOP does not back his baseless election fraud claims.

Georgia lawmaker Marjorie Taylor Greene appeared this week to contradict former President Donald Trump's stand that his supporters should not vote in the 2022 midterm elections or the 2024 presidential elections unless the GOP backs his election fraud claims.

"We must root out the fraud, but we also have to VOTE," Green continued. "If we don't vote, the Democrats win by default. It's time to audit the 2020 election, prosecute the fraud, end mass mail-in ballots, and FLOOD THE POLLS in 2022."

Last week, Trump released a statement on Twitter via his spokeswoman, Liz Harrington, claiming that unless the GOP backs him on his baseless voter fraud claims, his supporters will opt out of going to the polls in 2022 and 2024.

"If we don't solve the Presidential Election Fraud of 2020 (which we have thoroughly and conclusively documented), Republicans will not be voting in '22 or '24," Trump said in his October 13 statement. "It is the single most important thing for Republicans to do."

Greene, a congresswoman from Georgia, is up for re-election in 2022. She won a strongly Republican-leaning district easily when her Democratic challenger dropped out of the race. However, Insider's Ashley Collman reported that Greene's 2022 re-election race is set to be a "bloodbath," with likely threats to her seat from both within the Republican party and from the Democrats.

Greene is known for her support of Trump, even embarking on a nationwide "America First" tour to push a conservative, pro-Trump agenda with Florida Rep. Matt Gaetz. However, in recent weeks, Greene fell out with fellow Trump ally Lin Wood, who told Insider that he and Greene were no longer "aligned" in trying to question the results of the 2020 presidential election.

Representatives for Greene did not immediately respond to a request for comment from Insider.

The former president continues to peddle conspiracy theories that the election was stolen from him, despite there being no evidence to support his claims.

Trump is calling for yet another vote audit, this time in Arizona's Pima County, despite the GOP-led vote recount in Maricopa County confirming that President Joe Biden beat Trump, and by 261 more votes than was initially counted.

In the meantime, some Republicans – including former New Jersey Governor Christie Whitman and former Trump official Miles Taylor, are standing up to Trump and urging GOP voters to support moderate Democrats in the mid-term elections.