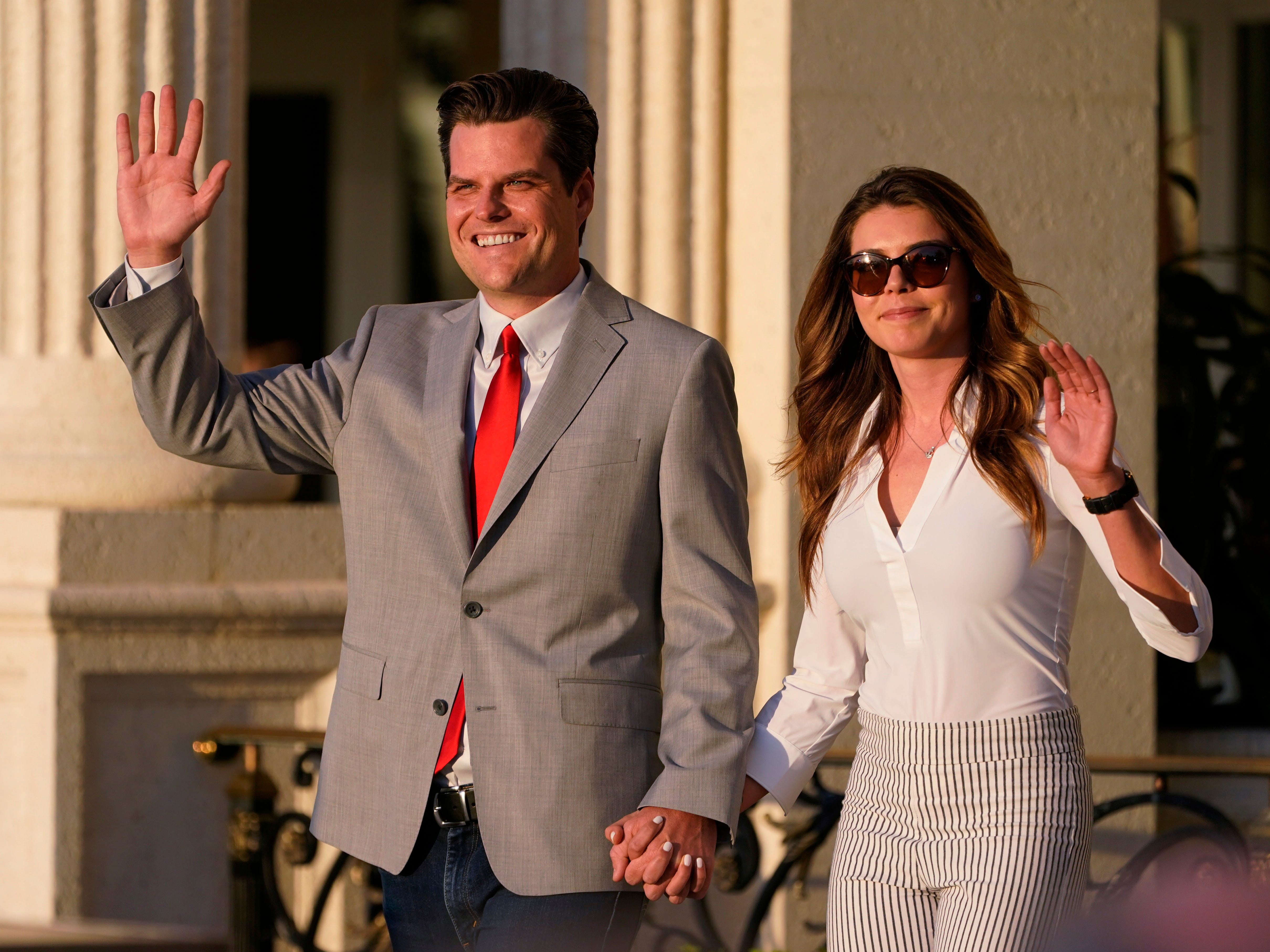 U.S. Rep. Matt Gaetz, R-Fla., and his girlfriend Ginger Luckey enter "Women for American First" event, Friday, April 9, 2021, in Doral, Fla. Gaetz eloped to Southern California marrying Ginger Luckey in a small ceremony on Catalina Island. The 39-year-old Republican announced the Saturday, Aug. 21, 2021 wedding on his personal Twitter page. He exclaimed “I love my wife!” along with a photo of them together.

US Rep. Matt Gaetz announced on Twitter that he and Ginger Luckey eloped to Southern California over the weekend, sharing a picture of the pair with the caption, "I love my wife!"

Luckey, 26, works as an analyst for biotech company Apeel Sciences and is the sister of Palmer Luckey, founder of Facebook-acquired Oculus VR, who supported and hosted fundraisers for former President Donald Trump. She met Gaetz in March 2020 at Trump's Mar-a-Lago Club in Palm Beach, Florida, where they eventually got engaged 10 months later, Luckey told the Daily Mail.

Following a few campaign stops in the Midwest with US Rep. Marjorie Taylor Greene, Gaetz and Luckey tied the knot in a small ceremony on Catalina Island, just 22 miles off the coast of Southern California, Vanity Fair reported.

Only a few dozen attended, including former Rand Paul staffer Sergio Gor, who was both the officiant and DJ. Other attendees included Palmer Luckey and his wife, "Bannon's War Room" hosts Raheem Kassam and Natalie Winters, and Nestor Galban, Gaetz's adopted son, according to Vanity Fair.

Gaetz, a Republican who has represented Florida's 1st Congressional District since 2017, is currently being investigated as part of a sex trafficking probe alongside his former right-hand man, Joel Greenberg. The New York Times reported that the inquiry is focusing on their interactions with "multiple women who were recruited online for sex and received cash payments" across multiple states.

Greenberg was indicted on 33 criminal counts and struck a plea deal in May, pleading guilty to six felony counts of sex trafficking, wire fraud, identity theft, conspiracy, and stalking.

Gaetz has denied any wrongdoing and has not been charged with a crime.