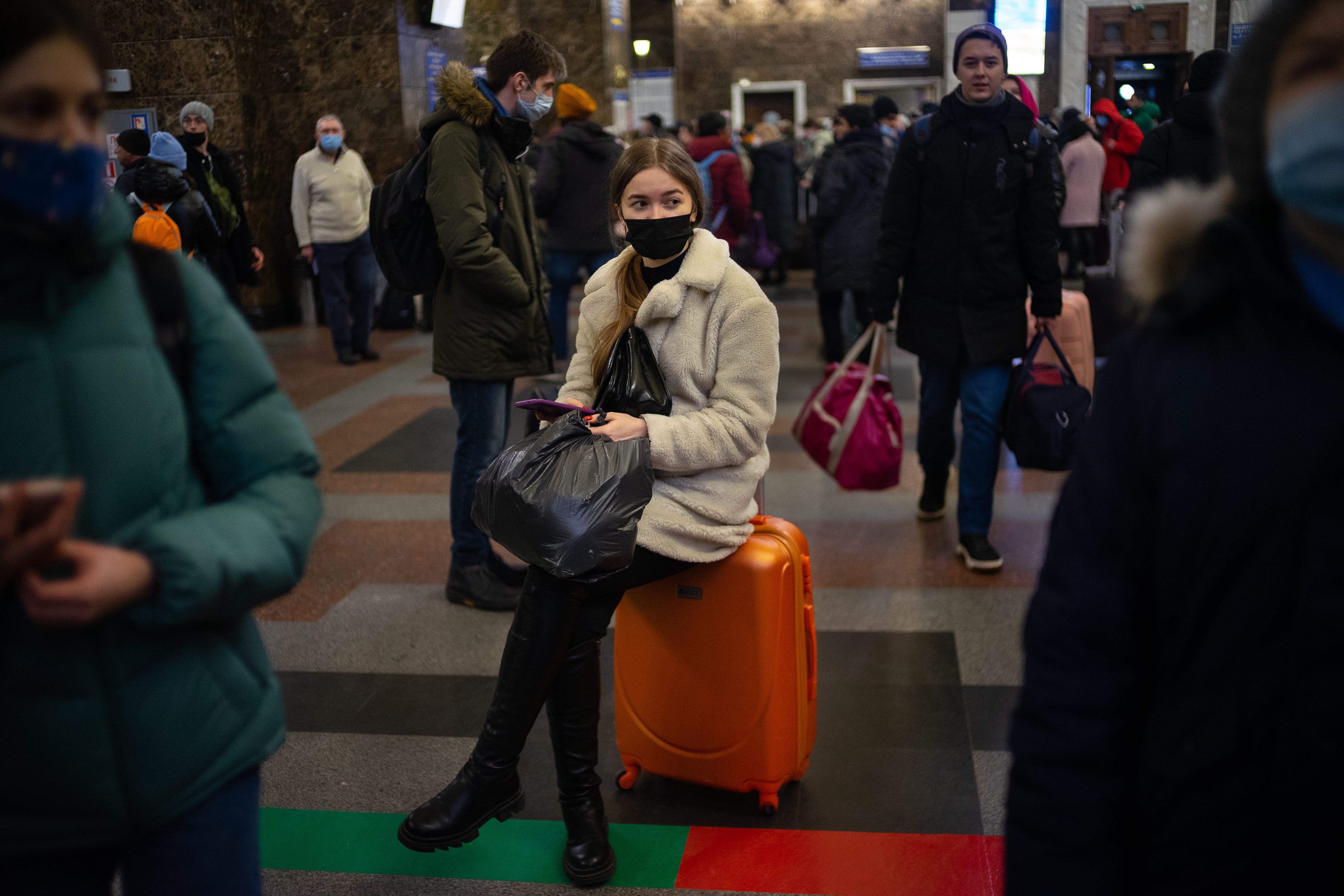 The train station in Kyiv.

An endless sea of red taillights fill every road from Kyiv, Ukraine's capital, to Lviv, in the far west.
Photographer Alan Chin reports from Ukraine.

An endless sea of red taillights fill every road from Kyiv – Ukraine's capital, in the middle of the country – to Lviv, on Ukraine's western border with Poland.

Since the Russian invasion of Ukraine began just before dawn on Feb. 24, with missile strikes and later ground troops closing in on cities, hundreds of thousands of people got into their cars and joined a desperate westward exodus.

Even the night before, this had seemed unthinkable: restaurants and cafes in Kyiv were open and operating as normal. There were no lines at markets or at banks. The undercurrent of anxiety was masked with, depending on who one spoke to, resignation, bravado, denial, or all the above.

But then, starting at about 5 in the morning, explosions could be heard in Kyiv's outskirts. Even more worrying, there were conflicting reports about fierce fighting with Russian ground troops at an airport 20 km from the capital. By late morning, the central bus station had shut down and people, dragging suitcases, began pouring into the train station. Most of the trains heading east, toward the most intense fighting, had been canceled, and an announcement over the PA system urged calm. Residents who couldn't, or wouldn't, travel west took cover in underground metro stations. Many others got into their cars. A stream of cars head west from Kyiv, Ukraine's capital.

The exodus has been calm and orderly. Motorists mostly obey traffic rules, even in massive traffic jams, and yield to ambulances. The long lines that now form at cash machines, gas stations, pharmacies, and supermarkets are as polite and efficient as they could be in a society where a receipt is generated for the smallest transaction. Thus far, electricity, mobile phone service, and internet access have continued to function in most places.

Online map apps like Google and Waze have been largely accurate in showing delays. Because the apps are dynamic in real time – adjusting to estimate the best and fastest routes – and given the huge volume of vehicles on the move, every road has been jam-packed, including potholed and cobblestone, rural lanes. Most of the vehicles, whether luxury SUVs and budget hatchbacks, carry Kyiv license plates.

That didn't mean that it's easy, though, with broken down cars on the side of the road, unpredictable obstacles, and unnerving dangers. Arbitrary rules about who has priority to buy fuel at gas stations added to the confusion. At one, a station employee was asking for a special "gas card," but it was utterly unclear what that meant and the request didn't come up at other stations.

Fifty miles south of Kyiv, lawyer Andriy Oliev was able to fill up and eat a hot dog. He said he was heading to Lviv, where he had relatives. "It's more dangerous in Kyiv than anywhere else in Ukraine right now," he explained. "Russia is trying to catch Kyiv in a circle. They're invading from Belarus. They're trying to catch Kyiv between two lines of fire." 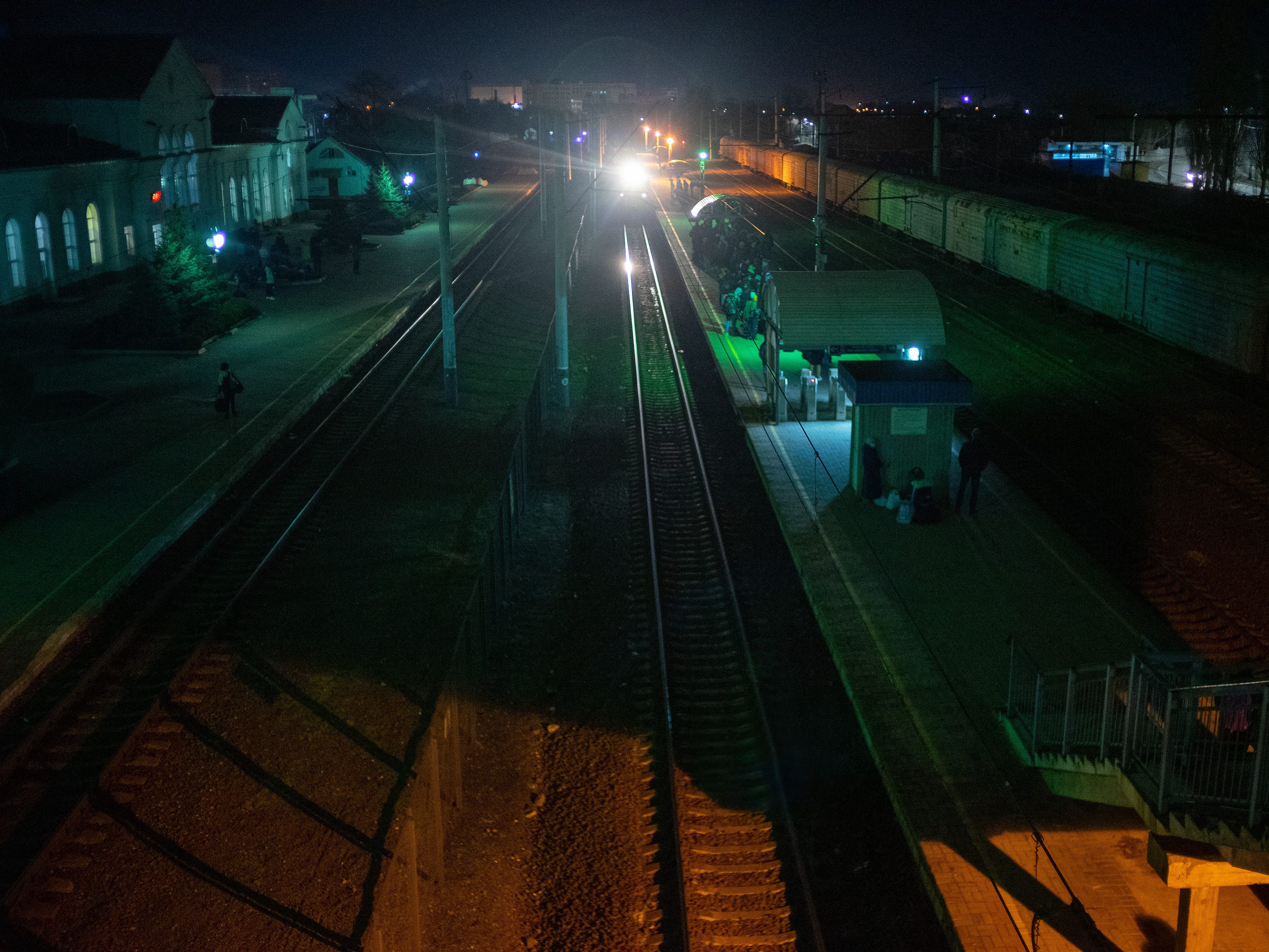 That evening, at the Bila Tserkva train station, M Ahtisham Bhutta was one of eight Pakistani students who had waited all day for the next train to Lviv. Speaking for the group, he said they had been studying at the National Agrarian University, in Bila Tserkva, for the last six months. "We were the first people here in the morning," he said.

"Last night was very horrible for us, because of bombs blasting. More than 10 bombs. We were sleeping. Suddenly it happened and we woke up. I could see the flashes of light," he said. "We didn't change our clothes, just took small bags, and came here. My family listened to the news and have been calling and calling. They are very worried because I am the only son of my parents and they sent me here for a fine education. But now, who knows? It's very difficult for all the students' mothers." M Ahtisham Bhutta (wearing an orange jacket) was one of eight Pakistani students awaiting a train to head out of Ukraine.

Nearby stood Anastasia Vasiliyevska, who works as a manicurist. "This morning at 5, hearing explosions, I was scared, very scared. Nothing ever happened like that before here," she said. She said she was heading to Poland, and added. "I hope they let us in."

"I'm just sad," she continued. "My friends are here and some of my family. They can't leave. They have their own families and children. They don't know what life they would have after… They say, yeah, we could leave, but then what? Where will we go? What will we do? They already bought food, water, everything." 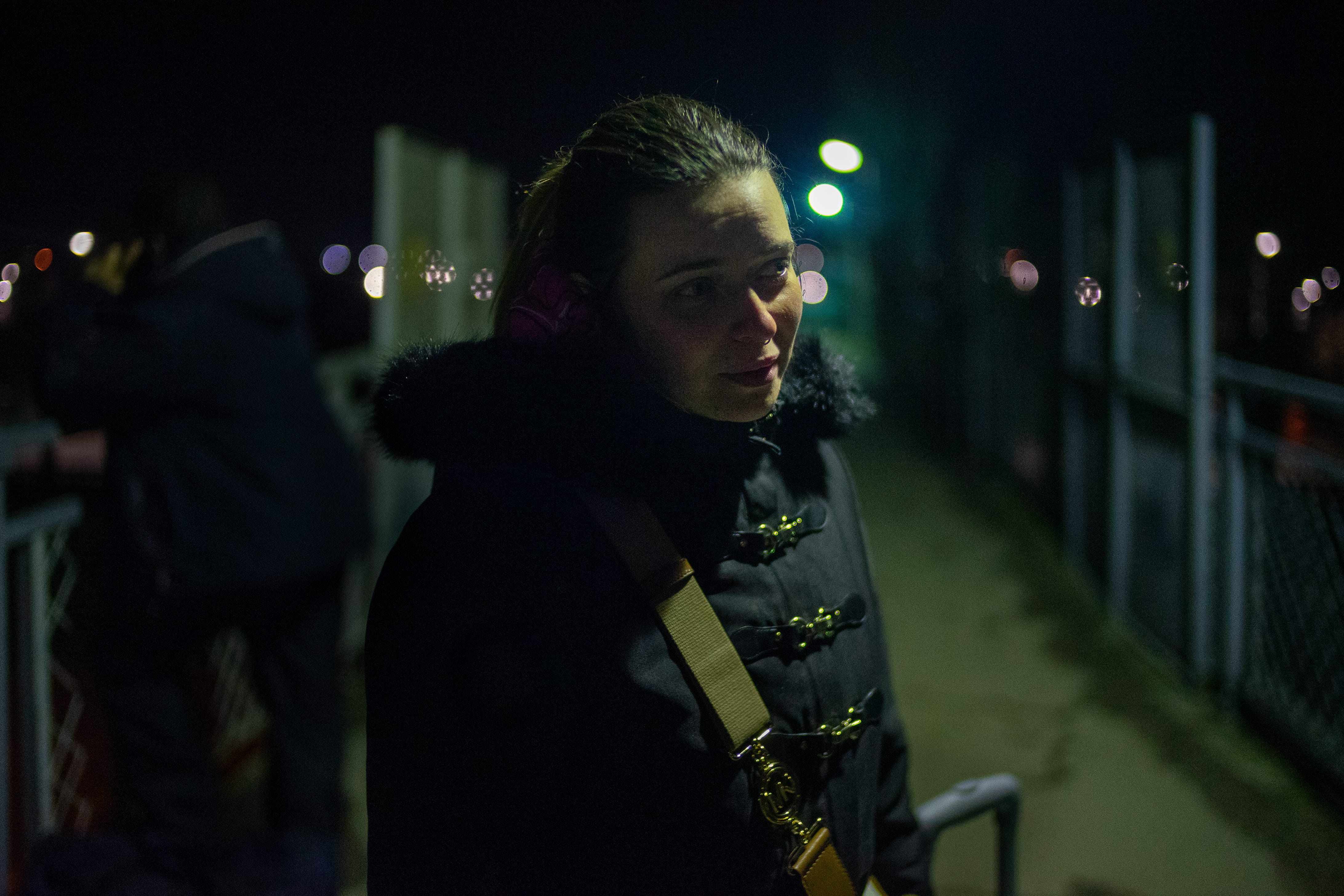 Late at night, winding through the villages of central Ukraine – still not quite 24 hours into the invasion – the only visible military presence was occasional trucks and equipment clearly belonging to support, not combat, units. But near the small town of Skvyra, a large group of men gathered at a gas station. Some were in military uniform, some police, and some were civilians (or perhaps undercover cops). They declined to be photographed or answer any questions. 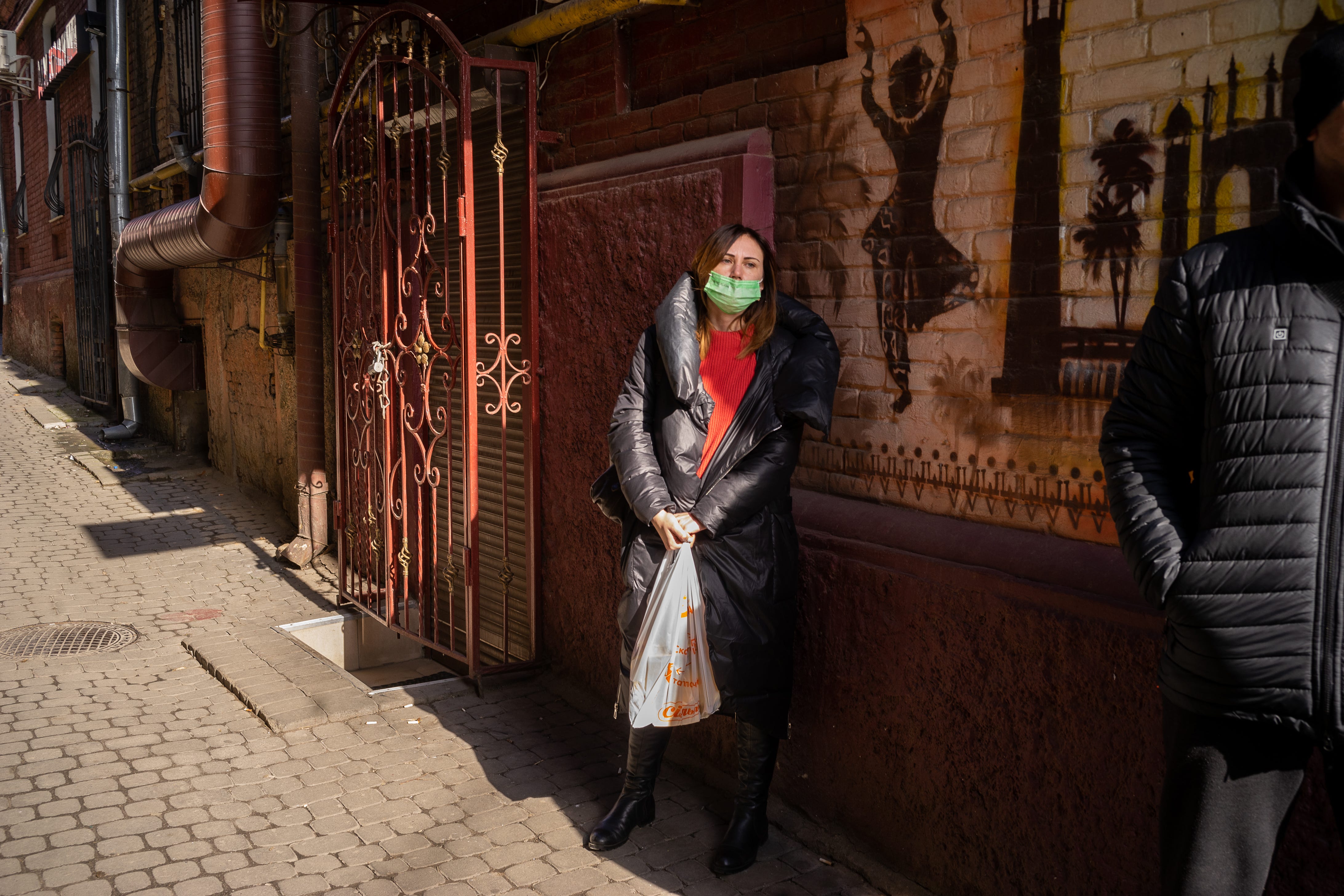 As air raid sirens sounded, a Vinnytsia resident sought the relative safety of an alley, near the wide avenue where she had been walking.

Adding to the stress of the voyage were the corrosive power of rumors. In Vinnytsia, we heard that the Ukrainian government had shot down a Russian aircraft north of the city, though it couldn't be confirmed. Sirens continued to blare repeatedly on the streets downtown. Each wail was followed by an ominous recording announcing that the danger of aerial bombardment was high, and that people should take cover. The police were on edge, with official Ukrainian media constantly warning of "saboteurs" and Russian spies. Along with another American journalist, I was questioned by the police for over an hour and asked to produce documents multiple times.

At one point in heavily congested traffic west of Vinnytsia, many cars and trucks started making U-turns, telling oncoming motorists that a bridge ahead had been blown up. Doing some quick checking, I saw that there had been unconfirmed reports. Northwest of Kyiv, the Ukrainian Army had indeed destroyed a [different] bridge to prevent the invading Russians from using it. But Letychiv and its small span across the Vovk River are over 200 miles away. In fact, this bridge was intact, and the traffic jams were caused by police and military checkpoints. Avtandil and Maluza Glonti and their three children dine at the "Ne Puhu Ne Pera" ("Neither Feather Nor Fur") roadside restaurant.

In Letychiv – nearly half way between Kyiv and Lviv – the Ne Puhu Ne Pera ("Neither Feather Nor Fur") roadside restaurant did a brisk business. Many of its menu items were sold out but what remained was a welcome hot meal for weary travelers.

Avtandil Glonti, a lawyer, his wife Maluza, a doctor, and their three children (above) left their home in Dnipro right before their city was struck by air and missile strikes. The city, southeast from Kyiv, sits on the Dnieper River that divides east and west Ukraine. He explained, "We had to flee Georgia in 2008. It was the same – Putin attacked Georgia."

"We've been driving 15 hours straight, because we don't want to waste time," he continued. "We're going to Poland. Once we're in a safe space, we'll decide what to do. Maybe Germany."

"It's hard psychologically to be in an unstable situation," Maluza added. "We had to abandon everything. But we can go back only if Russia leaves." Dasha Polischuk is a 28-year-old kindergarten teacher from Cherkasy, a city on the Dnieper River, was traveling with her year-old baby boy Maxim, her husband Roma (all above) and other members of her family in a van. They had been on the road for nine hours without stopping, because they had continued to hear the air raid sirens as they passed through towns and cities on the way.

"Shock. Panic," she said of the first explosions the night before. "We were running and rushing to pack everything. In a situation like that it's impossible to explain what happens in your soul. And more importantly, what might happen to your family and your baby. I wish for Putin and his family to live through the same that we just did. I want to ask the Russian people to stand up against Putin."

The mass movement continues, although able-bodied men aged 18 to 60 are now forbidden to leave the country because they're supposed to stay and fight. Ukraine's cities at night are blacked out, to make it harder for Russian planes to find their targets, and quiet, with a curfew in place. It remains to be seen if any of these internally displaced people and soon to be refugees can return home any time soon.