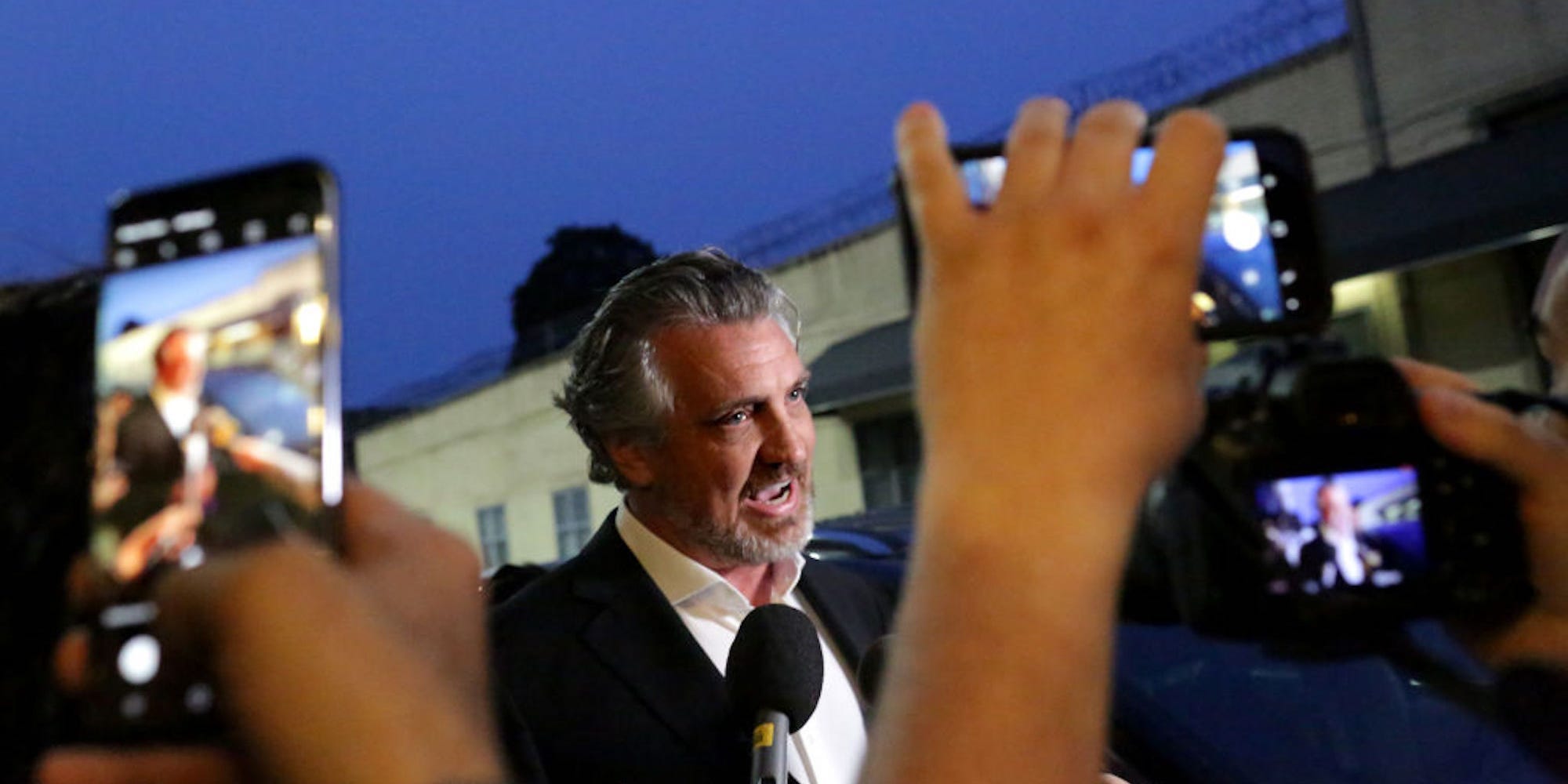 The Informed Consent Action Network is one of the most influential anti-vax groups in the world.
The group has brokered ties with far-right Trump supporters in recent months.
It's bankrolled by the New York philanthropist and billionaire Bernard Selz.
See more stories on Insider's business page.

As part of his bid to encourage Fox News viewers to question the safety of COVID-19 vaccines, Tucker Carlson in June praised the work of an obscure campaign group named the Informed Action Consent Network, or ICAN.

Carlson described ICAN as "a group that advocates for transparency on vaccines," citing emails it had obtained to attack White House medical chief Dr. Anthony Fauci, a popular hate figure for the far right.

ICAN is seen by many as a more extreme – and dangerous – organization that Carlson's description let on.

It was one of the figures on the so-called "disinformation dozen" list cited by President Joe Biden's administration as the main sources for anti-vaccination disinformation online, which Biden has called on Big Tech to combat.

ICAN is particularly notable, experts say, because it has actively courted conservatives and supporters of former President Donald Trump, whom multiple studies have shown to be the most reluctant to trust the shot.

Since being founded three years ago, the group has waged a media, legal, and online campaign to hammer home the theory that the damage caused by vaccines is being systematically suppressed. 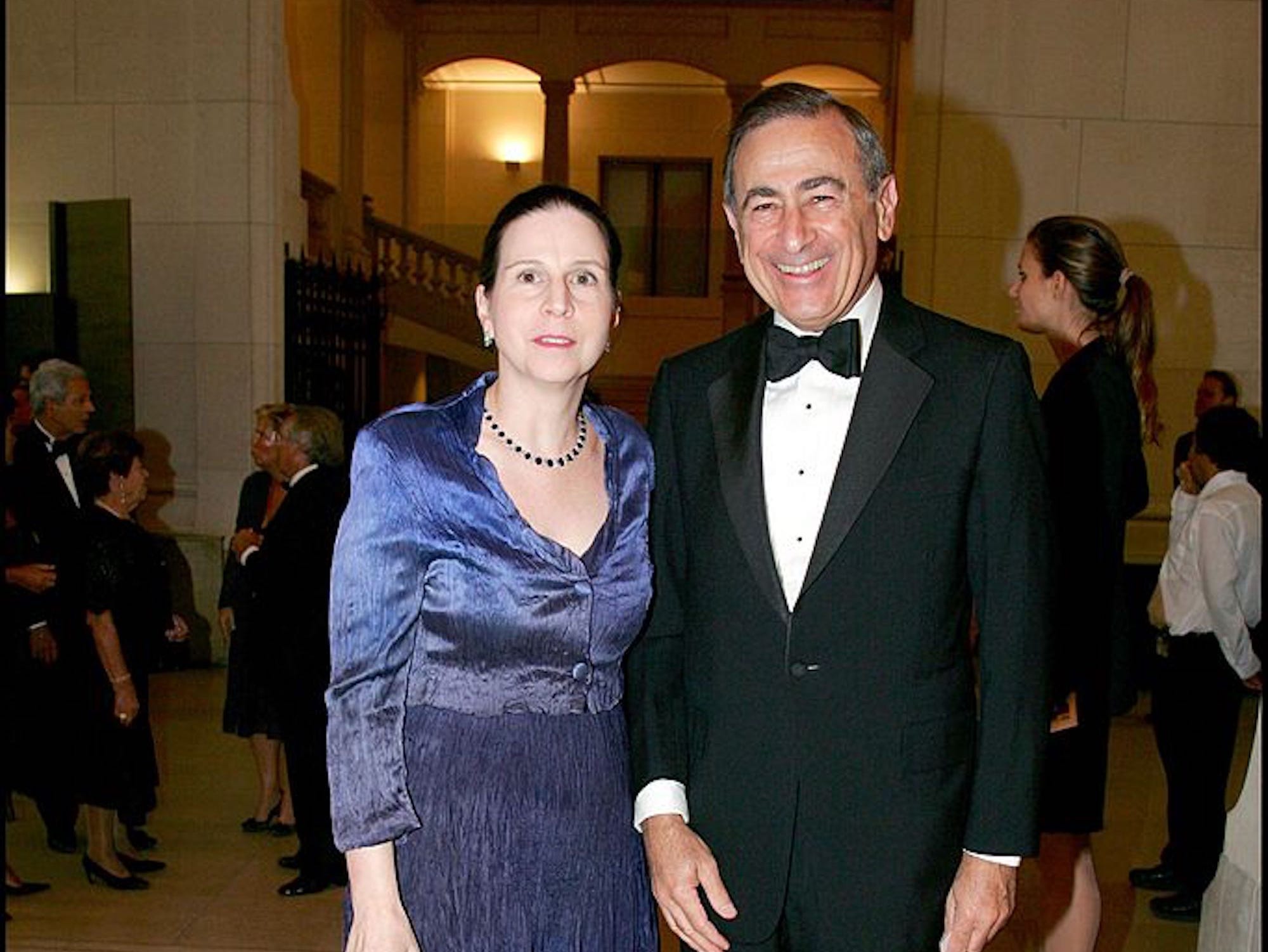 Lisa and Bernard Selz in September 2006.

The group is based in Texas, a hub for libertarian right-wing causes, and the campaign is – per a Washington Post investigation – largely bankrolled by the New York financier Bernard Selz and his wife, Lisa.

Vaccine hesitancy is killing thousands, and impacting US economic recovery

The Delta coronavirus variant continues to spread in the US, causing serious illness almost exclusively in those who have not accepted a vaccine. The continuing spread of the disease also imperils US economic recovery.

Imran Ahmed is the CEO of the Center for Digital Hate, the UK-based charity that compiled the "disinformation dozen" list cited by the Biden administration.

He told Insider that ICAN and its CEO, Del Bigtree, were among the top anti-vaccination influencers on the list.

"The disinformation dozen aren't just 12 individuals, but they essentially act … as marketing tools of the overall anti-vax credo," he said.

ICAN, meanwhile, has sought to build these ties by emphasizing a hostility to liberal and scientific "elites" shared by anti-vaxxers and Trump fans, he said.

Bigtree, in particular, had "made it their focus to target people with Republican values or who are Trump adherents," Ahmed said. In fact, the ICAN CEO had appeared at an event before the January 6 "Stop the Steal" rally in Washington, DC, that preceded the attack on the US Capitol.

Also present were anti-vaxxers Charles and Ty Bollinger, who have featured on Bigtree's influential podcast "The Highwire," which was recently removed by YouTube for violating anti-disinformation policies. Another major anti-vax activist and "Highwire" guest, Joseph Mercola, has appeared on Steve Bannon's podcast, further illustrating how the movements have cross-fertilized.

Tara Smith, a professor of epidemiology at Kent State University, told Insider that Bigtree had long hosted guests who backed Trump's attempts to downplay the pandemic or undermine public-health officials.

"His bottom line pushes distrust of the government and experts, which fits in well with the Trump playbook," she said.

Ana Santos Rutschman, Assistant Professor of Law at Saint Louis University, said ICAN and Bigtree were "taking advantage of the way anti-vaccine messages resonate with many Trump supporters and deliberately propagating vaccine disinformation with those supporters in mind."

As well as forming ties with the right, ICAN has spearheaded legal challenges to vaccine mandates in schools and other organizations across the US.

Bigtree defended his position in a telephone interview with Insider.

"We simply are a consumer-advocacy group that seeks to make sure that people are getting the safest products they can. There is a protocol to how we approve pharmaceutical drugs, and we believe that vaccines should adhere to those same protocols and principles," he said.

He said public-health officials and the Centers for Disease Control and Prevention were wrong to advocate Americans to get the shot: "I believe it's reckless. I believe it's dangerous and I think it is unnecessarily putting people in unknown risk situations."

Claims that the vaccines have not been properly tested for safety have been squarely rejected by most public-health professionals and infectious-disease experts. The shots have been found in clinical and real-world trials to be safe and effective.

The CDC says on its website that the US COVID-19 vaccines "have undergone and will continue to undergo the most intensive safety monitoring in US history." The Food and Drug Administration fully approved Pfizer's vaccine on Monday, saying "the public can be very confident that this vaccine meets the high standards for safety, effectiveness, and manufacturing quality." 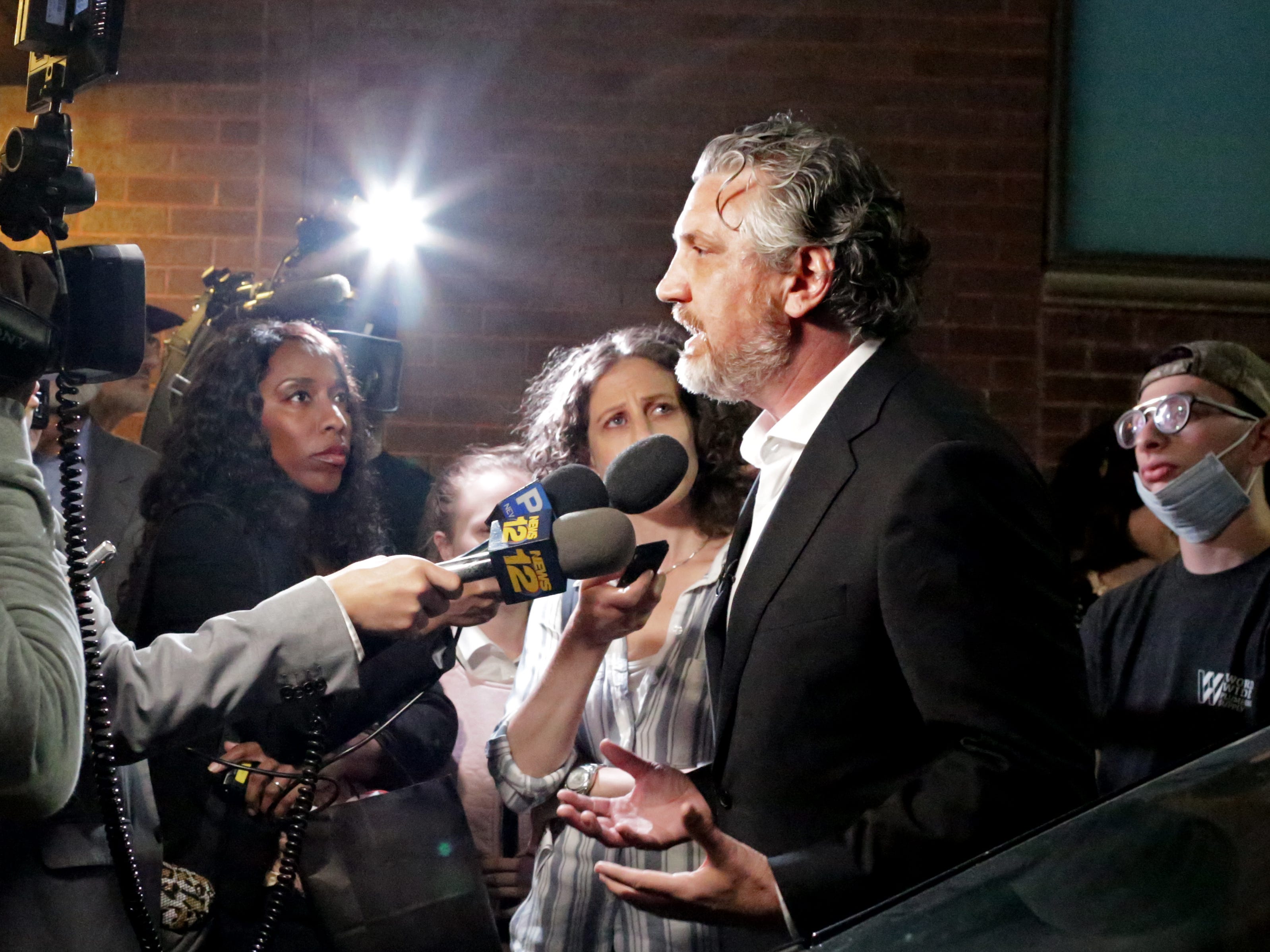 Photo by Yana Paskova/For The Washington Post via Getty Image

Bigtree denied allegations that he had sought to broker ties specifically with Trump supporters, saying he would not "waste time" on supporters of " a man who is no longer president." He also said he has "never quoted or given any attention to the myth of Q," referring to the QAnon conspiracy-theory movement.

On his decision to speak at the event preceding the January 6 rally, Bigtree said: "Wherever there's a large audience that will hear the information that we have to share, then I will go there."

He also said that while he personally doesn't have any medical qualifications, his work as a producer covering science on TV programs like the "Dr. Phil" show qualified him for his role at ICAN.

He said he regularly consulted with medical experts about scientific research on vaccines, but declined to share a list of the experts when asked by Insider.

ICAN's campaign is bankrolled by a wealthy New York couple: The hedge-fund manager Bernard Selz and his wife, Lisa, as The Post reported in June.

For years the couple has donated to conventional artistic and philanthropic causes, but more recently started channeling money into anti-vax groups and influencers. According to The Post, the couple has provided three-quarters of ICAN's money, including $1 million in 2017 alone.

Bigtree said he did not discuss private donors or their views. Selz did not respond to multiple emailed requests for comment.

The Post traced the couple's involvement in the anti-vax movement to 2012, and said their money was used to produced "Vaxxed," the controversial anti-vax documentary Bigtree produced. The film cemented Bigtree's status as a rising star in the movement.

ICAN is among the best-financed anti-vax groups in America, giving it an organizational and legal advantage over others, said Santos Rutschman, the law professor.

"A very limited number of high-resource groups control and fund most the anti-vaccine activity in the US, and ICAN is part of that club," she said. 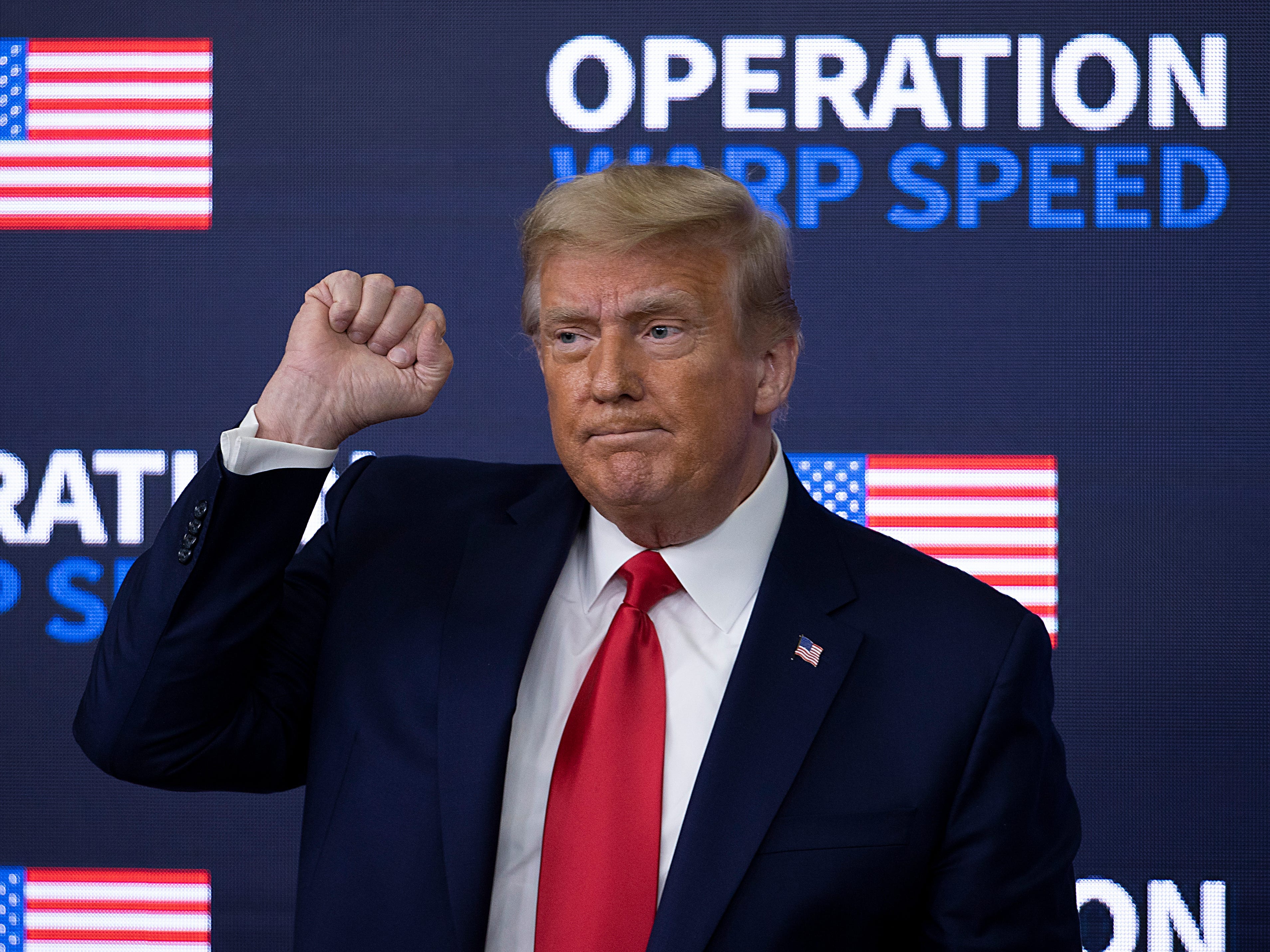 In some ways, the alliance between Trump supporters is unexpected. After all, the vaccines were developed as part of the Trump administration's Operation Warp Speed, and prominent conservative figures – including Trump – have urged Americans to get the shot in recent months.

But Ahmed said it was inevitable that a hypothetical politician would one day seek to exploit this budding alliance between anti-vax groups and Trump's base, and potentially propel the anti-vaccination movement further into the GOP mainstream.

"There's always a politician that comes along, thinking they can exploit it. In the US you can see [some Republicans] trying to play to this new coalition," he said.

"The Trump playbook is that it is possible to build a coalition, a base out of these various crank groups."