Apple refused a request from Facebook to remove negative reviews in the App store after pro-Palestinian protesters coordinated an effort to tank ratings because of censorship of Palestinian content, NBC News reported.

On Saturday, the Facebook app had a 2.3 out of five-star rating in the App store compared to a more than four-star rating last week. The largest category of ratings is one-star reviews, with many comments saying their rating is due to Facebook censoring hashtags like #FreePalestine or #GazaUnderAttack.

"User trust is dropping considerably with the recent escalations between Israel and Palestine," said one senior software engineer in a post on Facebook's internal message board, NBC reported. "Our users are upset with our handling of the situation. Users are feeling that they are being censored, getting limited distribution, and ultimately silenced. As a result, our users have started protesting by leaving 1 star reviews."

An internal message reviewed by NBC showed that the company was very concerned about the coordinated effort to tank ratings, categorizing the issue as an SEV1, which stands for "severity 1." 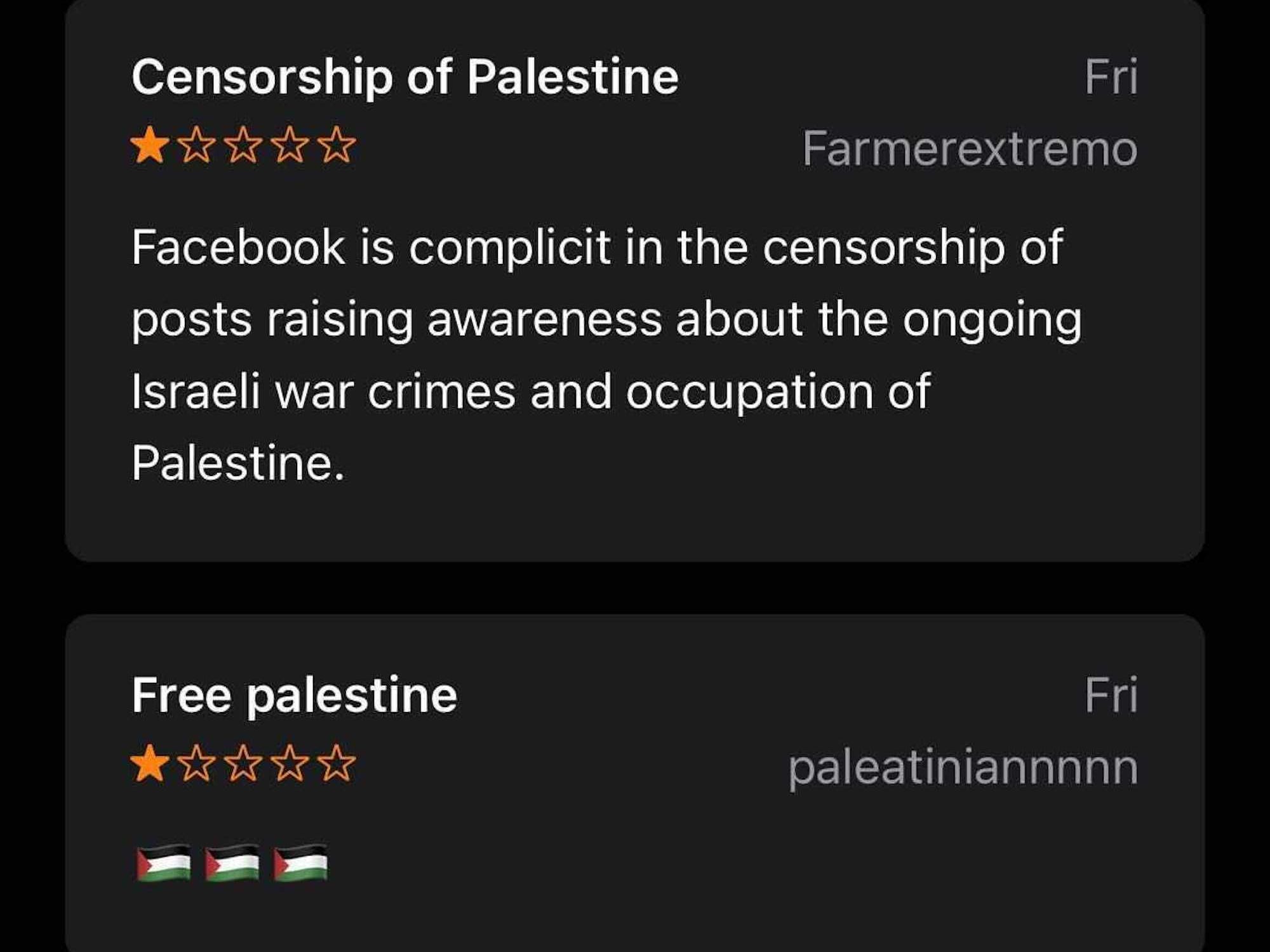 Ratings on Facebooks App in the App store were down to a 2.3 out of 5 on Saturday night.

Facebook contacted the App store to have the negative reviews removed and Apple denied the request.

Pro-Palestinian activists have complained that many social media sites have restricted or deleted pro-Palestinian content and accounts.

Instagram restricted posts with hashtags referencing Al-Aqsa, the holy mosque in Jerusalem, telling some users who posted with the hashtag that their content was associated with "violence or dangerous organizations."

The restrictions came as Israeli airstrikes fell on Gaza and Hamas fired thousands of rockets towards Israel. The 11-day conflict would eventually kill 12 Israelis and more than 200 Palestinians and displaced thousands more in Gaza.

Instagram, which is owned by Facebook, said it mistakenly labeled the location as being associated with a terrorist organization.

Users of both platforms have also said that their posts about the conflict had been removed. The company blamed a glitch in moderation algorithms for the removals,

The Los Angeles Times reported that some users resorted to using an ancient Arabic script that was void of dots and marks to trick online algorithms to not pick up and remove posts about Palestine.

Others intentionally misspelled words like "Palestine" or "Israel" or used COVID-19 themed stickers on their posts to make them more visible.