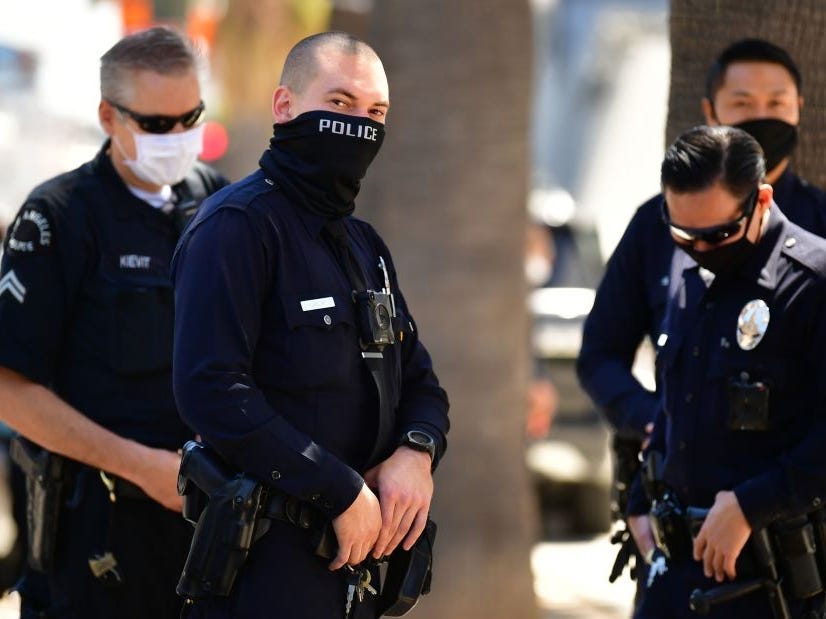 Los Angeles Police Department (LAPD) officers wear facial covering while monitoring an "Open California" rally in downtown Los Angeles, on April 22, 2020. – Over the past week there have been scattered protests in several US states against confinement measures, from New Hampshire, Maryland and Pennsylvania to Texas and California.

Ring gave free products or discount codes to more than 100 LAPD officers, and encouraged them to share the discount codes with other law enforcement officers and members of the public, according to the Times.

More than 15 of those officers ended up promoting Ring products, and the company ended up giving away tens of thousands of dollars in free product, including at least $12,000 to a single police station, the Times reported.

Amazon did not respond to a request for comment on this story and the LAPD could not immediately be reached.

Ring's version of an influencer marketing program, which it called "Neighborhood Pillar," enlisted LAPD officers to "educate members of the community on the benefits of Ring" by sharing discount codes and promotional materials to "influential people in the community that care about crime prevention safety," with every 10 uses of the discount codes earning them a free Ring device, the Times reported.

Ring told the Times that it ended the program in 2019 and now works directly with community groups.

But LAPD ethics policies prohibit officers from receiving "gifts, gratuities or favors of any kind which might reasonably be interpreted as an attempt to influence their actions with respect to City business."

An LAPD spokesperson told the Times that an initial review of emails between its officers and Ring didn't find any violations of that policy.

But privacy and law enforcement experts told the Times that officers' public safety advice to members of their communities might be biased – or give the appearance of bias – because of the promise of receiving free Ring devices.

Vice previously reported on how Ring aggressively pursued partnerships with law enforcement agencies around the country over the years as it has tried to build out its private surveillance camera network, inking deals with hundreds of police and even fire departments.

The rise of such privately owned networks, which allow police to access camera footage in many cases without a warrant, have drawn criticism from privacy and criminal justice experts, as well as Amazon employees, who say that they present major privacy risks.