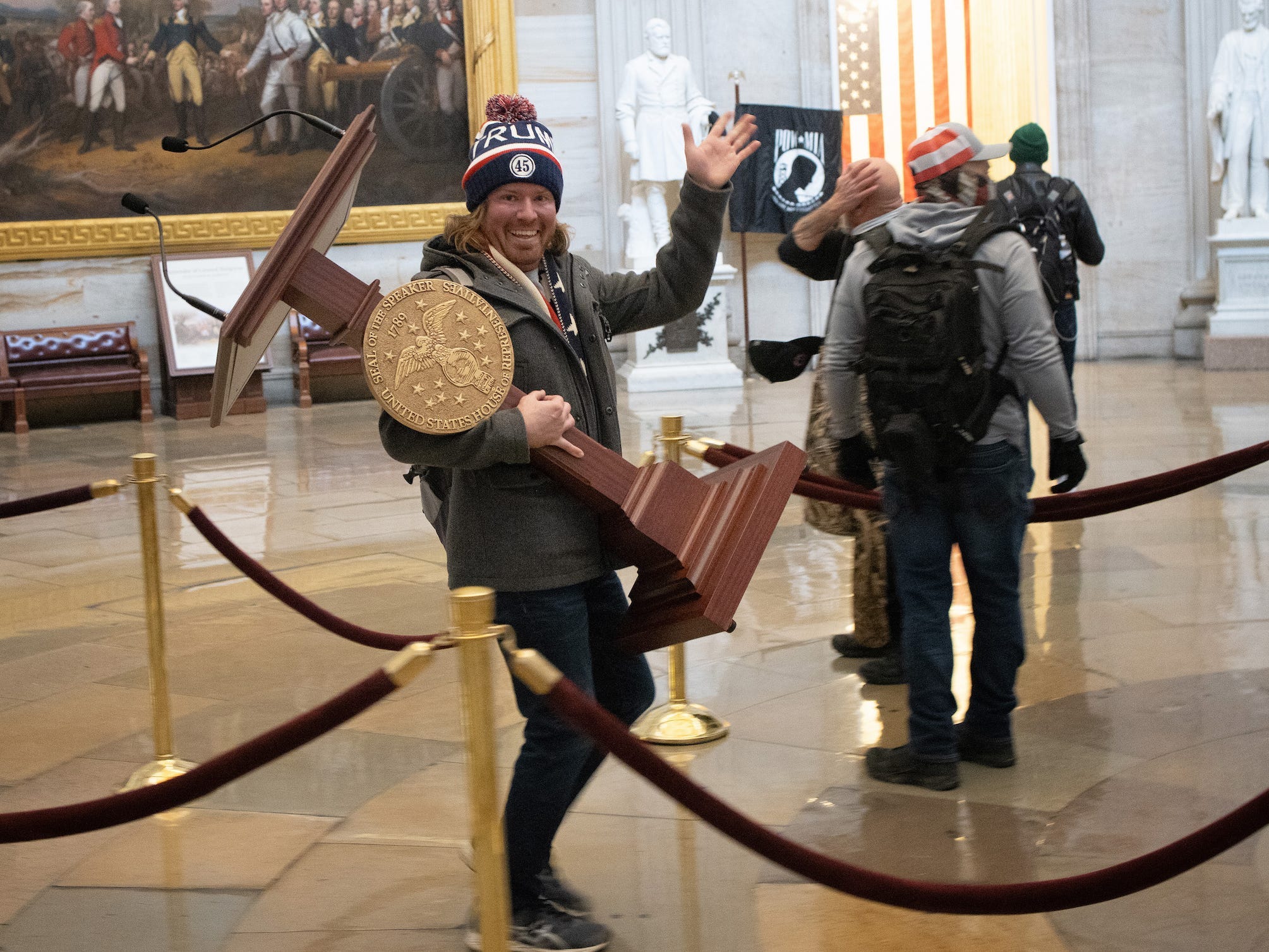 A pro-Trump rioter (Chicago CEO not pictured) carries the lectern of House Speaker Nancy Pelosi through the Rotunda of the Capitol.

A Chicago-area tech CEO was arrested and charged with unlawful entry for entering the US Capitol building in the riots on Wednesday, the US Capitol Police said on Thursday.
Bradley F. Rukstales from Inverness, Illinois, has been the CEO of Cogensia, a Chicago-area marketing data company, for 19 years, per his LinkedIn profile.
Cogensia placed Rukstales on a leave of absence while they “assess further,” the company said in a tweet.
In a statement, Rukstales apologized for entering the Capitol, calling it “the single worst personal decision of my life.”
At the riots in Washington, DC, which were egged on by repeated false claims by President Trump that the election was stolen from him, thousands of the president’s supporters violently clashed with police and stormed the US Capitol Building, leaving behind broken windows and vandalized offices.
Visit Business Insider’s homepage for more stories.

A Chicago-area tech CEO has been arrested and charged with unlawful entry to the US Capitol during the riots in Washington, DC on Wednesday, US Capitol Police said on Thursday.

Bradley F. Rukstales from Inverness, Illinois, was one of dozens arrested after thousands of people from across the US converged in Washington, DC, on Wednesday to protest the presidential vote certification in Congress. Encouraged by President’s Trump repeated false claims that he lost the presidential election because of massive voter fraud, rioters clashed violently with police and stormed the Capitol building, leaving a trail of destruction in their wake.

Rukstales is the chief executive of Cogensia, a tech company based in the Schaumburg suburb northwest of Chicago that provides “data-driven marketing solutions,” according to its website. In a statement posted to Twitter on Thursday, Rukstales apologized for entering the Capitol.

“In a moment of extremely poor judgment following the Jan. 6 rally in Washington, I followed hundreds of others through an open set of doors to the Capitol building to see what was taking place inside,” Rukstales said in the statement.

“My decision to enter the Capitol was wrong, and I am deeply regretful to have done so,” he continued. “Without qualification and as a peaceful and law-abiding citizens, I condemn the violence and destruction that took place in Washington.”

In a separate statement, Rukstale’s company, Cogensia, said they had placed the CEO on a leave of absence while they “assess further.”

The company said that Rukstales was “not acting on behalf of Cogensia nor do his actions in any way reflect the policies or values of our firm.” 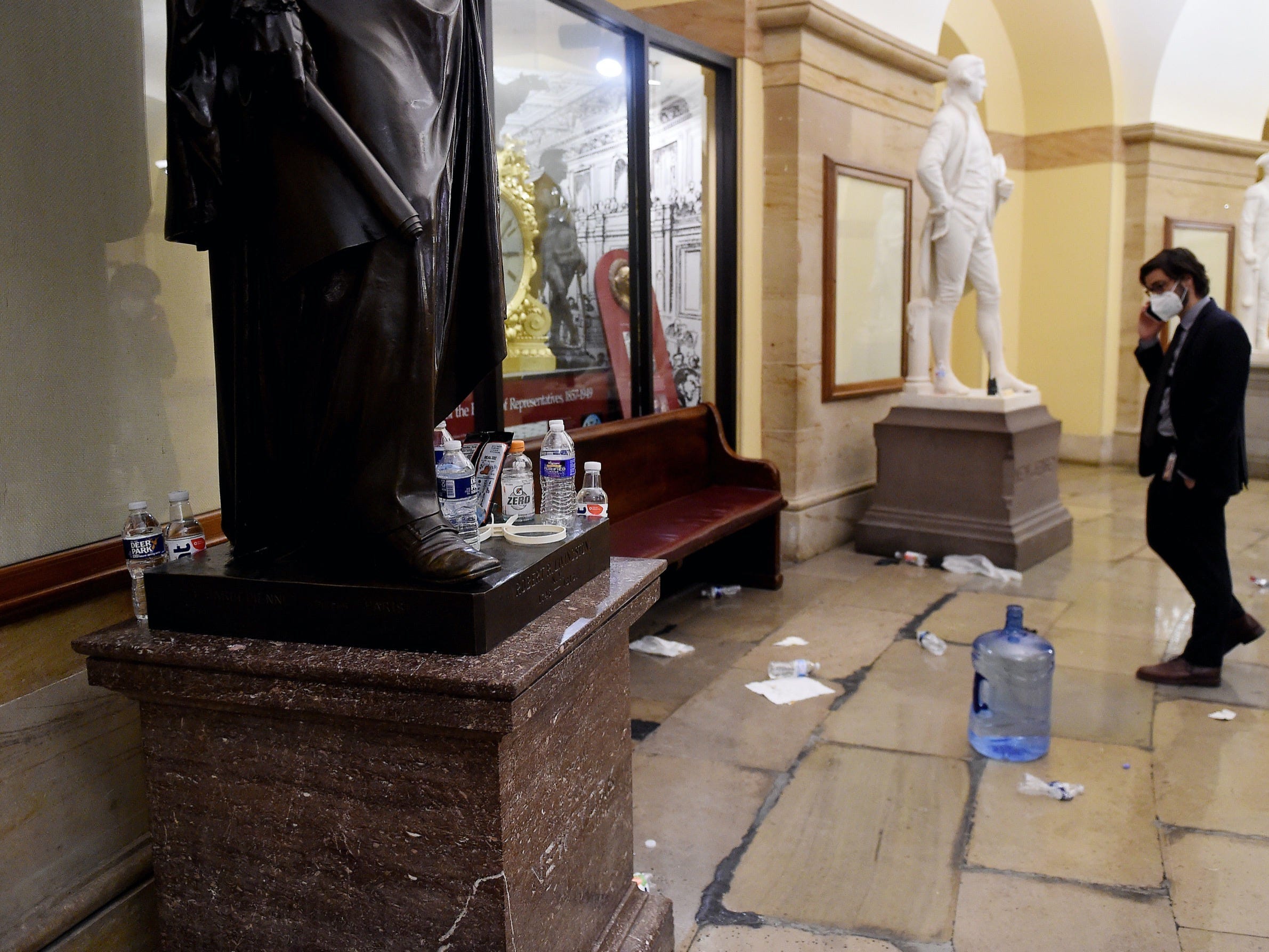 The aftermath of the US Capitol Building riots.

In the past few years, Rukstales, who has been CEO of Cogensia for 19 years, has donated thousands to Republican political causes, including $2,600 to President Trump’s campaign and $2,400 to the Republican National Committee (RNC) in October 2020, according to Open Secrets. Also in October, he gave $250 to Republican Senator Kelly Loeffler, who lost her Georgia Senate runoff election earlier this week to Democrat Raphael Warnock, the first Black senator from Georgia.

In 2019 and 2019, Rukstales donated $1,250 to the RNC. He’s also donated to Jeanne Ives, a former Republican member of the Illinois House of Representatives.

While Rukstales is on a leave of absence from his company, Cogensia’s COO and senior vice president, Joel Schiltz, has stepped in to lead the company in the interim, the company said on Linkedin. Cogensia and Schiltz did not immediately respond to Business Insider’s requests for comment.

Before joining Cogensia in 2002, Rukstales was a senior vice president at InfoWorks, a Nashville-based management consulting company, for four years and an analytics manager at Michigan-based data marketing company R.L. Polk for five years in the 1990s, according to his LinkedIn profile.

In his statement, Rukstales said that he regretted that he had brought embarrassment to his family, colleagues, friends, and “fellow countrymen.”

“It was the single worst personal decision of my life; I have no excuse for my actions and wish that I could take them back,” he said.

In an interview with CBS Chicago outside his Inverness home on Thursday evening before he posted his statement on Twitter, Rukstales declined to say why he entered the US Capitol Building.

“I was in the wrong place at the wrong time and I regret my part in that,” he told the network, adding that the violence was “terrible.”

Rukstales did not immediately respond to Business Insider’s request for comment for this story. His statement on his arrest is his only tweet.

The lawmakers who had been forced out of the Capitol earlier on Wednesday due to the violent insurrection, resumed their session later that evening and certified Joe Biden and Kamala Harris’ election win at about 3:45 a.m. ET on Thursday.